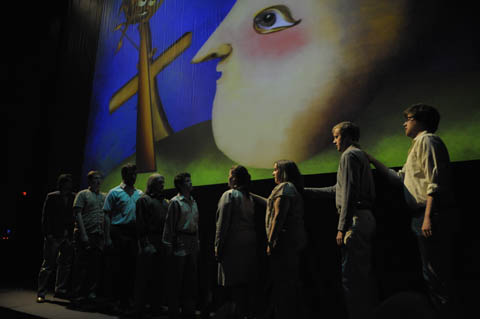 When one has the chance to experience the embodiment of such a laundry list in a living, breathing piece of art, the impact is much greater. So to witness the premiere of Freund’s PASSION With Tropes last weekend was truly fulfilling as a listener and a former student. Throughout the 80+ minute piece of music theater Freund’s espoused wisdom revealed itself to me in the form of “do as I say AND as I do”.

A little back story (more can be found at the link here): Freund’s PASSION was originally composed in 1983, and the revision underwent a distillation of the orchestration and re-sculpting of the narrative to direct motion towards the end of the piece. In the notes for the program, Freund describes the piece as “a theatre work about the experience of attending an oratorio (or, more specifically, a Passion)”. As far as an all-encompassing message, he suggests that PASSION “is about life as defined by suffering and love”. One of the most unique aspects of this piece is the manner in which it is told: instead of a linear narrative Freund opted to create a collage of musings by over forty poets, philosophers and playwrights for the libretto. Presented in almost a cut-up method, strands of Nietzsche flow into Beckett, Shakespeare segues to Sartre, and Vonnegut morphs into Dostoevsky, all of which are interspersed with actual liturgical text. The “…With Tropes” in the title takes on two meanings, with a trope as a word or expression used figuratively as well as the embellishment of parts of the Mass via insertion of a musical phrase.

The premiere of the 2011 version of PASSION took place at the Ruth N. Halls Theater at Indiana University-Bloomington to a packed house. It was such a multi-faceted production that it required participation between four university departments as well as support from the New Frontiers in the Arts and Humanities and the Institute of Digital Arts and Humanities at Indiana University. The orchestration was for a 20-person orchestra, members of the IU Contemporary Vocal Ensemble (as well as various combinations of soloists), and a children’s choir from the local St. Charles School. There were also dancers and actors from other departments at IU to enhance the drama and action, as well as visuals (animation and still images) and stage direction provided by talented local and faculty artists. The audience was seated in four sections on the stage, surrounded by choirs as dancers and actors walked down the aisles from all angles. 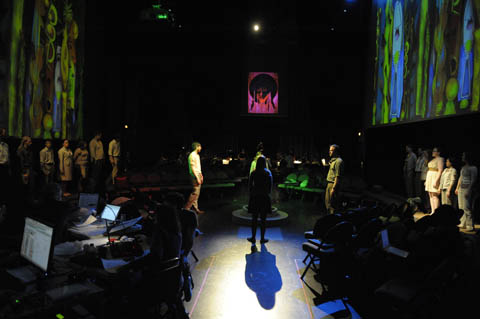 One of the most fascinating aspects of PASSION is how organically and effortlessly Freund’s narrative flows. I’ve experienced the same seamless unfolding in films by masters such as Fellini, Greenaway and Godard and the effect is mesmerizing. In PASSION, ghosts of medieval chant ingeniously morph into what could be a Staple Singers number followed by a modernist orchestral texture. The musical language is always stylistically supportive of the text, with the collage-like arrangement enhancing the sense of time travel. Although some chosen texts only appear as one-off segments, Freund created multiple continuities as other texts and their musical counterparts return and progress at different points throughout the piece. The overall effect is almost as if someone is changing the channels to watch several different things at once. Lesser composers would have had a hard time succeeding with such a narrative; Freund’s technical skills and fluency in multiple musical dialects enabled an unhindered flow throughout the intense, 80+ minute journey. The staging of certain dramatic scenes (i.e. Waiting for Godot and King Lear) provided repose and release from the scored texts, showcasing the bare sound of the human voice and the graceful motions of the dancers. And the on-stage seating enabled the attendees to be surrounded by the visuals, sounds and motions of all of the performers, thus enhancing the immersing nature of the production.

For those unfamiliar with the Jacobs School of Music, the performers here generally range from fantastic to amazing. The chamber orchestra and Contemporary Vocal Ensemble handled their duties with finesse, poise, and expertise, never overbearing and always adapting effortlessly to whatever was asked of them. The children’s choir probably melted some hearts, lending a sense of innocence and unconditional love to the performance, and the actors and dancers performed with elegance and grace. With all of these different factors contributing to the success of the piece, enough praise cannot be bestowed upon conductor Carmen-Helena Tellez. With so many different elements at play, her understanding of the score, restraint and self-assurance were evident throughout.

And with such a convincing performance it is necessary to acknowledge the masterful score that facilitated it. Freund’s ingenuity, creativity, and command of his craft were on display, leaving no doubt that he is an artist of the highest level and that PASSION is a high-water mark of a fecund career. It is a bold, imaginative, risky work full of brilliant orchestration, color, heart and soul. Judging by the tangible sentiment in the room, Freund’s passion, energy and confidence worked wonders.