Various Artists: the language of 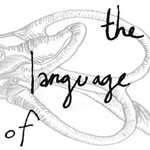 Various Artists – the language of

the language of is a compilation CD of ten pieces by eight emerging composers in NYC, many of whom are associated with the Wet Ink Ensemble.  Released by Quiet Design Records in Austin, TX, this compilation is a forward-thinking treatise on a constantly evolving new music scene.  The production, recording, and design chores were undertaken by the composers and their colleagues, thus comprising a very personalized aesthetic. the language of is an essential purchase, not only for its DIY approach, but because it contains a variety of exciting, well executed compositions.  And due to the wobbly legs of the music industry, resourceful composers could do well by using this CD as a business model.

There is an immediacy and yearning to the music featured on this CD.  The emotional content (which, of course, varies from piece to piece) is enhanced by the recording techniques used to create the myriad sound-worlds, an approach that is both startling and engaging.  There is not one ounce of sonic sterility that one might find on pristinely recorded chamber music CDs.  Many of the recording techniques used are in-your-face, close mic’d, compressed, and manipulated to each pieces’ ambient requirements.  Some of the pieces that most represent traditional chamber music are ambient mic’d, a representation that provides a bird’s-ear-view (sorry about that one) for the listener, or an aural realism, if you will.   The variety of production from piece to piece is therefore more akin to the world of rock, jazz, and experimental music.  The packaging, designed by composer Clara Latham, is an attractive and environmentally friendly cardboard cover that features nothing in the form of liner notes (this may be one of my only complaints, but it definitely adds a veil of mystery to the release).

A brief overview of each piece follows after the break:

Nucleus by Alex Mincek, for tenor sax and percussion, starts off the CD.  Flutters, skronks, repeated licks and riffs interjecting between suspenseful silences build into a fever pitch of high, sustained sax notes and rolling patterns on the drum kit.  Mincek, playing double duty as composer and saxophonist, evokes arresting images of entities stuck between the world of machines and humans, desperately trying to maintain some sense of identity.  Despite some of the mechanical leanings, the humanity is undeniable, unforgettable and totally convincing.

Sunspots I, II, and III by Jeff Snyder are sequenced as support columns for the flow of the CD (tracks 2, 5, and 9, respectively).  For Buchla synthesizer and resonating chambers, Snyder manages to pull off more than just the audio equivalent of palate cleansers.  The synth gurgles, whirs, hums, purrs and squelches, often very quietly, and usually with a humorous tilt.  In a medium where many composers can tend to overwhelm the listener with sound, Snyder tempts and teases with a subdued nature.  These pieces are fun, quirky, humane, comforting, and deceptively deep in their processes.   Not to mention, they provide an excellent narrative component to the CD in its entirety.

Shruti by Alex Ness is a fascinating piece for solo viola.  A shruti is a microtonal inflection in Indian music and an obvious influence on the elastic harmonic language of this piece.  Amy Cimini’s viola playing is daring, sensitive and confident, thus enabling Ness’ piece to unfold and progress unhindered.  This piece could (and should) find it’s way into the solo viola repertoire due to Ness’ masterful writing for the instrument: gorgeous, undulating bariolage passages melt into warbling glissandi and edgy scratch-tone distortion.  Shruti is an exhilarating journey.

I Had a Slow Thought on a Hard Day for saxophone and accordion (performed by The Kenners) is a gem by Kate Soper.  Quixotic interjections sandwiched by exasperated breathing help to create a pensive, film-noir mood.  Soper’s usage of niente attacks and disappearing lines increase the efficacy of the occasional outburst.  The overlapping timbres of the two instruments, as well as mostly conjunct lines, give the impression of a hybrid, mega-reed instrument that engulfs the listener.  My favorite parts of the piece are some of the delicate sho-like textures of cascading harmonies and counterpoint.  Soper successfully achieves a balance between frustration and humor, as well as the direct and the abstract.

The Language Of is a piece for solo cello by Jim Altieri.  Despite its brevity, Altieri effectively conjures a kaleidoscopic microcosm with crystalline passages of harmonics.  The timing of events, as well as the through-composed form, relays a semi-improvised feel that is equally laid-back and full of anticipation.  It’s almost as if the listener’s role is that of eavesdropper, and the performer doesn’t know they have an audience.  Stark, charming, and vulnerable, Altieri’s narrative sense provides the perfect summary for the CD as a whole.

Next up is the fifteen minute Viola Quartet by Eric Wubbels.  Structurally, there is a keen balance present between kinetic and potential energy that is thoughtful and satisfying.  Frenetic, spastic, herky-jerky textures arrive at serene plateaus of suspended animation.  The moving sections of this piece draw-and-quarter the listener (in the most positive way), teasing us with a possible beat, flow or barline that is never fully established, all the while leaving the listener questioning whether they are moving forward or running in place.  Pizzicato exclamations and shimmering harmonic glissandi weave their way in and out of sixteenth note runs, eventually coagulating into a sustained major 3rd.  The escalating arpeggiated passages at the apex of the piece are dizzying, mesmerizing and seem to explore every nook and cranny of the viola.  This piece is no small feat, its multiple layers revealing themselves more and more each listen.

Clara Latham’s i am the beat that waits for you to see me, for flute and drum kit, is a shining example of the blurred boundaries between improvised and specifically notated music.  Shamanic droning, multiphonics and fluttertongue passages explore the notion of the flute as a paintbrush with multiple widths.  The spacious, expansive nature of the drum and flute interjections create a sense of timelessness and elasticity, while percussive exchanges between the two instrumentalists jump-cut to whispered secretive dialogue.  Usually an unlikely duo, Latham (the flutist on the recording) is incredibly adept at balancing the potentially behemoth drum kit with the lone flute.

The exclamation point of this collection is Sam Pluta’s SWITCHES for cello and drum kit.  In the world of paradoxes, Pluta’s piece is beautiful damage and moving stasis.  This cello is processed with such heavy distortion that its fundamentals are often missing, displaying thorny, jagged blasts of overtones and barbed noise.  Pluta’s decision to process an acoustic instrument via studio magic is fine evidence of the limitless possibilities composers have outside of the concert hall, but the bile of SWITCHES exists in the live rapport between the two performers.  The relationship between the drums and cello is an exercise in controlled anarchy (I sense a strong punk/noise rock influence on this one), pulling no punches along the way.  With a gratifying form and a mind-bending sonic palette (I am willing to bet that very few people have used a cello in this context), Pluta’s piece is a well-timed aural ass-kicking.

If you haven’t already guessed, I really love this CD.  Not only does it contain music by very creative, capable people, it represents a possible sea change for young composers everywhere.  But the autonomous spirit and ambitious nature of the release are merely afterthoughts.  The relevant issue is that there are eight emerging composers in NYC that have expressed something worthwhile and heartfelt: that is why this CD is such a success to my ears.  If you want to go forth and order multiple copies for friends, family members and strangers, you can find the language of on iTunes, www.cdbaby.com and www.quietdesign.us.