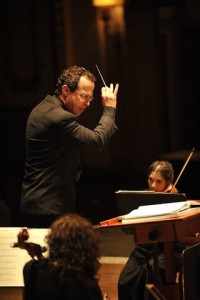 While a fair amount of attention has been given to the American Composers Orchestra Underwood New Music Readings (namely here, here, here, here annnnd…here) which took place this past Saturday, Miller Theatre wasn’t the only place where new orchestral works were getting read & performed. Saturday was also the culmination of both the Albany Symphony‘s first annual Composer to Center Stage Festival Reading Session and their American Music Festival at the Experimental Media and Performing Arts Center at the Rensselaer Polytechnic Institute. As the spring semester at SUNY Fredonia was so kind to have come to an end, I decided  to make the 6-hour drive up to Albany and check it out myself.

The Reading Session featured works by three up-and-comers from the usual suspects of graduate programs: 200 OK by Robert Honstein (Yale), Siren Song by Wang Lu (Columbia) and  In the Hour of Exile by Elizabeth Lim (Julliard). All three works demonstrated strong knowledge of the orchestra as an instrument and awareness of the various ingredients that seem to be common in today’s orchestral palette. The selection committee was smart to have chosen works with disparate styles – each piece had a completely different sound and color than the others. While each work was impressive in its own right, it was the Albany Symphony under the direction of its powerhouse conductor David Alan Miller that shone the brightest; I’ve conducted a fair amount of composer sessions myself, and Miller and the orchestra gave a textbook demonstration of how it should be done. 40 minutes were given to each composer’s piece and the metamorphosis from the first attempts to the final run-through of each work was really spectacular. Afterwards there was an insightful post-mortem out in the lobby with the participants, Miller, and the resident composers whose works would be performed that evening: John Harbison, Stacy Garrop, and James Primosch; it was great to hear discussion that not only covered technical issues, but explored the very idea of whether or not a chamber work may be suitable for orchestral treatment.

Just a few short hours later, the Symphony convened again in the hall to perform four works, including two world premieres and the live performance before a recording premiere. The Albany Symphony had already performed Garrop’s orchestral work Becoming Medusa in the fall as part of her year-long residency with the orchestra, and she explained how David Alan Miller had suggested the idea that the piece could act as the first movement of a symphony. The result of that suggestion was two movements that opened the concert – The Lovely Sirens (2nd mvt.), which had the woodwind Sirens enticing the sailors in the brass section to their bombastic doom, and The Fates of Man (3rd mvt.), which pitted a solo cello (representing Man) against the full forces of the orchestra (representing the three Fates), pleading for control of his existence…judging by the clever way the cello is kept from finishing its final idea, it’s not hard to figure out who won that debate.

James Primosch’s Luminism was based off of the Luminist style of Hudson River school of painters from the mid-19th century -another suggestion from David Alan Miller, who doesn’t seem to be afraid to give informed direction to his commissioned composers – and  the Symphony did a fine job of balancing the Impressionistic ensemble writing and the various solos and duets that Primosch interspersed throughout the work. In preparation for a recording session the following day, Miller ended the program with John Harbison’s Gatsby Suite, which was created by yet another conductor suggestion, this time from David Zinman. A very effective distillation of his opera, the Suite features a period-style dance band (violin, soprano sax, trumpet, trombone, banjo, piano, tuba and drumset) within the middle of the orchestra, and the execution was seamless in the transitions between the two groups – this should get a lot of performances once the recording becomes available.

Overall, the adventure to Albany was an extremely enjoyable and informative one (I spent several hours in the car talking into my iPhone about ideas for new orchestral works). David Alan Miller is deserving of all the hype I’ve heard about him for years, and the orchestra made me realize that new music for orchestra is not a dead art at all, but one that needs able and interested performers to bring it to life. The concert (as well as previous concerts featuring music by Garrop, Harbison and Timo Andres) can be found at the Albany Symphony’s InstantEncore page (a site which seems to be gaining momentum in the few short years it’s been in existence).