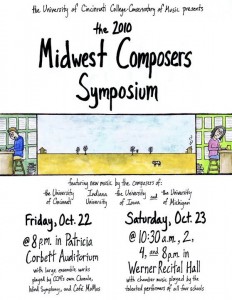 The University of Cincinnati’s College-Conservatory of Music (CCM) proudly hosted last weekend’s meeting of the MidWest Composers Symposium, a consortium currently made up of the composition departments from CCM, Indiana University and the Universities of Iowa and Michigan.

The Symposium dates back to the 1960s, and, according to University of Michigan Professor of Composition Evan Chambers, arose dually from the prevailing sentiment that American contemporary music was not respected globally and the fact that, at that time, it was exceptionally challenging for student composers to get their works performed. “Each of the [charter] schools was known for different kinds of composition,” Professor Chambers explained in a phone interview, “there was no other way to find out what was happening between these institutions.”

Because I was unable to attend last weekend’s festival, I checked in with the event’s student co-director Jennifer Jolley, a current doctoral candidate in composition at CCM. Jennifer received her undergraduate degree from the University of Southern California Thornton School of Music and then took time off to teach, perform and accompany in Vermont. She began studying at CCM in 2007 and organized this year’s MidWest Composers Symposium with fellow graduate composition student Angelique Poteat.

S21: What were the greatest organization challenges you faced in pulling together this year’s MidWest Composers Symposium?

CCM is unfortunately on the quarter system, which meant that our classes started on September 22; therefore we only had a month to plan everything. Angelique Poteat (my co-director) and I gave our composers two weeks to assemble their pieces and performers, and that left us a mere two weeks to put everything together. We couldn’t figure out the concert order until CCM submitted their contribution, and we wanted to give the new CCM students a chance to submit a piece for the symposium.

S21: At its founding, each member of the MidWest Composers Symposium possessed unique musical tendencies; for example, the University of Iowa was know for preferring experimental compositional techniques. Do similar musical identities still exist from one member institution to another? If so, what were the weekend’s most remarkable examples of this diversity?

I believe they do, although this year UI did not submit as many electronic/experimental pieces as they have in the past! In fact, Angelique Poteat’s “Cyclic Complement” for bass clarinet and fixed format (CCM), Melody Eötvös‘s “Die hohle Höhle” for 5.1 surround playback (IU), Jerod Sommerfeldt‘s video “Linear” used sounds constructed in Pd (CCM), and Zach Zubow‘s “Fugitive Yellow Shirt” for violin and electronics (UI) were highlights from the experimental end; Mr. Zubow’s piece being one of the few electronic submissions from UI.

On this note, I believe CCM likes to take subtle risks in their music (Paul Schuette‘s “Complete Fragments” was installed in the lobby of Werner Recital Hall, for example), UM’s Daugherty influence makes their pieces agressive (David Biedenbender‘s “you’ve been talking in your sleep” and William Zuckerman‘s “Ajax” come to mind), and IU writes conservative but solid, well-constructed pieces (like Timothy Miller‘s “Sketches on Scars.”)

I’ve heard good things from others outside the composition department about the concerts. Even Roger Zare‘s and Eric Lindsay‘s pieces for wind ensemble were programmed a couple of days prior to the symposium, thanks to Rodney Winther, conductor of the CCM Wind Symphony. In general, the CCM composition department has benefited from the symposium because we have been able to hear what our colleagues at other schools are writing.

How does the prevailing compositional style at CCM relate to that of the other schools in the MidWest Composers Symposium?

I believe we have similar inspirational tastes compared to the other schools, although we like to keep our compositional options open. Do we like to experiment in our pieces like UI? Sure, we use electronics, but we also create sound installations and construct our own piano mutes. Are we agressive like UM? We can be, although we might throw in some kazoos instead of using saxophones in our pieces. Do we write solidly-constructed pieces like IU? I would certainly hope so.

S21: What were the most notable pieces featured in last weekend’s concerts? Why did they stand out?

Donia Jarrar‘s “Cairo, I Love You” (UM) (this piece had the chicest title, by the way), was a refreshing take on a programatic work. Her piece made musical storytelling seem exquisite and effortless; that is not easy to do. Even though the work is in a rough ternary form, it made programmatic sense. Props to Ms. Jarrar for captivating my attention at a 4 PM concert! Her and Justin Snyder’s performance of the piece sold it to me.

David Roberts‘s “Four Miniartures After K.V.” (IU) stood out because his movements were compact, satirical (like the Kurt Vonnegut texts), and highly-charged. I liked his use of color, especially his use of percussion. I believe his miniatures were successful because Mr. Roberts did not compact too much information in the movements. I would like to hear this piece again, especially because his (and Tim Miller’s) clarinetist became violently ill that day; if it weren’t for Rebecca Danard‘s willingness to step in, both pieces would have been toast!

I would have to say the absolute highlight of the symposium was Danny Clay‘s “A Strange Mythography.” (CCM) I know I am biased in this situation, but I stand by my convictions. Here Danny wanted to create something similar in size to Cy Twombly‘s “large-scale mythology-inspired canvases” when composing this choral piece. In general, Danny wanted to see what he could get away with when he had a whole bunch of singers on stage, two stereophonic percussionists, and a string quartet in the middle. His experimentation with the choir had them singing as loud as possible (you can easily do this with a 50-person choir), to chattering in Greek as quietly as possible, to playing beautiful chorale melodies with kazoos doubled with the string quartet. Kazoos and string quartet? Best orchestration idea ever. The combination of sounds reminded you of a viol consort after you got over the fact that the choir played KAZOOS. This in addition to the percussion and the beautiful and simple harmonies and melodies Danny used made this piece exquisite. I am so thankful this piece was performed (Danny didn’t think this piece would ever be performed), and I cannot wait to hear a recording of this piece.

S21: This original goal of the MidWest Composers Symposium was to foster an exchange of diverse musical ideas between student composers who were otherwise isolated from one another. How has this mission changed now that technology makes communication between geographically separated composers nearly effortless?

I’m sure the technologies have helped bring us closer together. (I have certainly gained a few Facebook friends, and I look forward to hearing about their compositional endeavors in the future.) After the symposium, we can still talk and keep in touch in this way, but what is great about the Midwest Composers Symposium in the first place is hearing each other’s music live and meeting with other composers in person. Nothing can replace this. Also, nothing can replace going to the local bar afterward with your new composer buddies, having a beer, and watching the conclusion of the 2010 NLCS. Good times were had by all.

2 thoughts on “Last Weekend in Cincinnati”