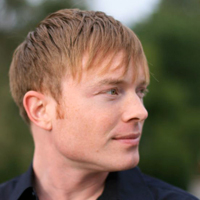 Last week at the University of Michigan School of Music, Theater and Dance saw a visit from renowned band composer John Mackey. Accurately described as a young hotshot, Mackey’s transformation from an unknown dance-music composer in New York to a wildly successful creator of band music began with the 2004 wind ensemble arrangement of his orchestral work, Redline Tango. Since then he has received countless performances from high school, college and professional groups and has earned stunning national popularity best illustrated by his estimable total of 5,000 Facebook friends.  Though he came to Michigan for the October 1 performance of his trombone concerto, Harvest, Mackey’s interaction with the composition department took place over three evenings, starting with a casual outing to a local Ann Arbor bar on Wednesday, September 29.

I was immediately struck by Mackey’s affability, which exceeded any estimate I could have made prior to meeting him. As the night wore on, I realized – via Mackey’s own admissions – that appearing “cool” to the young people who so often perform his music is a critical part of his image as a professional musician. Armed with an electrifying personality, Mackey knows how to fill a room and endear himself to strangers. He is self-deprecating and open, and these qualities were probably the mot valuable elements I drew from his visit, given how closely they tie into his marketing success.

Mackey’s business sense is truly admirable. He takes advantage of social networking and other online resources to get his name out into the market and self-publishes his works, which yields allows him to control the distribution of his intellectual property and pursue copyright infringements when necessary. For these reasons, I think Mackey epitomizes much of what the modern composer should be. Instead of submitting to the esoteric proclivities of our profession, he has found a way to update the social potential of composers within a given network. While I have met other composers with strong local presences, I have not met one with a following as strong and widespread as Mackey’s.

Of course, Mackey’s music is at the center of his success, and it serves him excellently given the market he targets. Highly rhythmic, laden with percussion and infused with progressive rock and other popular influences, his compositions are ideally suited for collegiate bands who are attracted to strong grooves and loud dynamics. In our composition seminar on Thursday, he explained that his non-band compositions sound the same, so it would seem wind ensemble is a perfect setting for the kind of music that comes easily to him. Interestingly, the night before this Mackey admitted he is a poor composition teacher, and the next day he told our seminar that he usually does not write without a commission. Thus, I did not find Mackey’s visit to Michigan a very informative experience on an artistic level. Nevertheless, hisprestige is undeniable seeing that his expansive popularity makes him a critical connection between thousands of musicians and the world of American contemporary music.

As I mentioned before, Mackey’s residency culminated in the Michigan Symphony Band’s performance on his trombone concerto, Harvest. Unfortunately for us composers, the previous day’s seminar included the most recent recording of Harvest, which had been played by at the University of Texas with New York Philharmonic Principal Trombonist Joseph Alessi only a few days earlier. I call this “unfortunate” because Alessi’s performance was super human, and it made the Symphony Band’s delivery on Friday underwhelming. David Jackson, Friday’s soloist, played valiantly, but the score was stacked against him. At moments when Alessi’s power penetrated clearly on the recording, Jackson was buried by the supporting sound. Perhaps further spoiled by the recording, I found the texture static and dull, and I yearned for a moment when the trombone would have acoustic space in which to saunter, liberated from the weight of the backing ensemble. In spite of these factors, the Symphony Band’s performance was definitely a success, and I left Hill Auditorium entranced by all the works I heard. The rest of the program featured an arrangement of Leornard Bernstein’s Overture to Candide (1956), Vittorio Gianni’s haunting Variations and Fugue (1964), Ricardo Lorenz’s El Muro (2008) and Florent Schmitt’s Dionysiaques (1913).

Both Mackey’s music and presence left me with the impression that wind ensemble and band music is the music of the future, and these other compositions did not change my mind. Capable of high energy and subtle sensuality, wind ensembles are a perfect platform for the diversity and dynamism of contemporary music, as consummated by his works from Harvest to Asphalt Cocktail. Moreover, while orchestral genres came of age at the pen of European masters, writing for wind ensemble gives living composer a direct conduit to oft-forgotten American stalwarts such as Vincent Persechetti and William Schuman.

Above everything else, Mackey was very matter-of-fact during his visit to Michigan, and in no other area was he clearer than in describing the advantages of writing for band. In a world where composers struggle to get any attention from orchestral conductors, band directors receive contemporary works for wind ensemble with great enthusiasm and often perform the pieces more than once.  Mackey’s personal success is emblematic of how much bands and wind ensembles can afford composers both in terms of finances and notoriety. As refreshing as it was to experience his humorous, sociable and pragmatic qualities, I was equally awed by the momentum of his cultural relevance. If nothing else, I learned from him the value of self-promotion and generating enthusiasm for your musical product. Regardless how much I integrate these concepts into my career, my standard bearer for how a composer should be his own advocate and spokesperson will always be John Mackey.