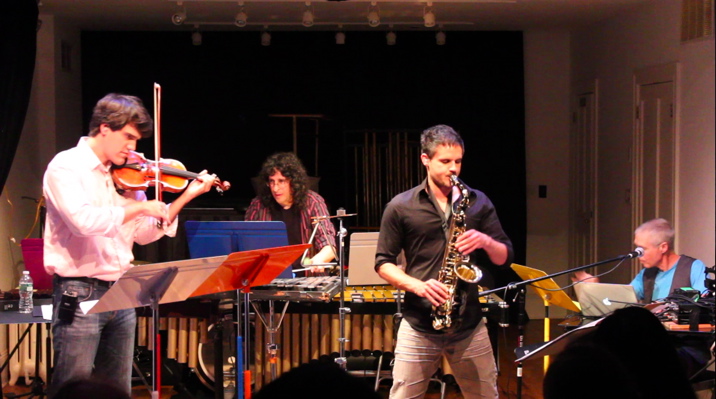 Barriers between various musical genres continue to be gleefully destroyed by insightful musicians and collectives.  One such divide that has been crumbling over the last few years has been any distinction between “bands” and “chamber groups.”  Beyond the ensembles made up of visually traditional combinations (“string quartets” such as Kronos and Ethel) are more unusual outfits like Clogs, a bassoon-viola-guitar-percussion quartet.

The final, June 10th concert of the 2011 Tribeca New Music Festival featured SWARMIUS, a band from San Diego with an intriguing quartet configuration of violin, saxophone, percussion and laptop/electronics.  Led by composer Joseph Waters (whose nom de band is Jozefius V. Rattus), SWARMIUS succeeds in producing some of the most dynamic, original, and compellingly infectious new music today.  This is testament not only to Waters’ brilliant compositions, but to the formidable prowess of the three instrumentalists: violinist Fiddlus el Gato (aka Felix Olschofka), Saximus (saxophonist Todd Rewoldt) and percussionist Crotalius Redfoot (Joel Bluestone).

Taking place in the intimate confines of The Cell Theatre in Chelsea, the concert opened with Cali Karsimala, which took the rhythms and scales of a Gypsy couple’s dance as a departure point for an extended virtuoso expedition. The piece is highly evocative of its Eastern European and Persian models, but also moves beyond them to suggest energetic dance music of some new, imagined culture.  Olschokfa and Rewoldt managed Waters’ sinewy and rhythmically tricky lines with verve and aplomb, and the timbral aspects of the piece (managed by Waters’ in real time from his laptop) were highly distinctive and memorable.

Drum Ride was another ultra-rhythmic traversal exploiting diverse exotic scales, this time over an almost omnipresent quintuplet ostinato.   Despite its similar stylistic ingredients to Cali Karsimala, it more than managed to distinguish itself as being quite different, with melodic, harmonic and timbral material not at all reminiscent of the previous work.   The only general similarity was that it again suggested ingrained folk music from a culture that doesn’t exist.

The title of the next piece removes the responsibility of the reviewer for providing any descriptive prose. Moonlight Beach Chaconne (The Beach Boys, J.S. Bach and Stevie Wonder Take A Trip To Nigeria, Where They Encounter The Ghost Of Richard Wagner, Impersonating A Shaman) delivers exactly what is promised by the title.  Brilliantly, the result is not a pastiche at all, but an exuberant, multi-layered and at times very affecting synthesis of the idioms referenced in the title.   Chromatic baroque harmony is always in the mix throughout the piece.  What the title doesn’t tell you is that the work is basically a violin concerto, played with both virtuoso mastery and moving lyrical expression by Olschofka.

Dragon was a paean to Japanese video game music.  With many recognizable themes swirling in high-spirited counterpoint, the piece exhibited bounteous imagination and sly humor, bringing the audience to audible laughter at various junctures.  Lucas, the Bringer of Light was a completely different venture—a long and highly variegated tone poem inspired by Waters’ 7 month-old grandson.  Using samples of his grandson’s vocalizations, Waters produced not only a deeply affecting portrait exploring the perceptions and temporality of an infant’s world, but an exploration of the machine-like aspects of human beings.  The timbral universe of Waters’ sounds in this composition were vast but still unified; the structure appropriately and compellingly organic.

The concert’s finale was Grand Larceny, an enthralling toccata inspired by the fast tempi, timbres and ultra-precision of speed metal.  For this number, the audience was asked to blow police whistles which had been distributed at the beginning of the concert at a climactic juncture, an effect that was both cathartic and hilarious.

In sum, the compositions of Joseph Waters and the musicians SWARMIUS produced a vibrant, highly memorable, gripping and deeply persuasive musical evening at The Cell.  Here’s hoping that they will return to New York with their unique sonic presence very soon.