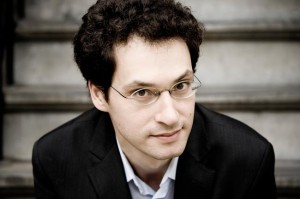 On May 15th, pianist Shai Wosner will be performing a brand new Piano Concerto by Michael Hersch. Titled along the ravines, the piece will be making its first ever concert appearance with the Seattle Symphony at Benaroya Hall, Tuesday May 15th at 7:30 PM.

Shai explains how he came upon his interest for the new work. “When I was looking to commission a new work, thanks to the Borletti-Buitoni Trust of London, I was listening to all kinds of music from composers from different generations and I came across a couple of CDs with piano and chamber works by Michael Hersch. It was clear that he was pursuing his own path with a very strong, personal voice. Those pieces seemed to contain an explosive mix of wildness and melancholy”.

Wosner is another performer that likes to mix the classics with newer, contemporary works. “Programming is really one of the fun parts of being a musician, in my opinion. It’s always nice to fantasize about potential programming ideas, even if, like with any new idea, you may find yourself rejecting it wholeheartedly the next morning. When it comes to recital programs, I try to somehow look for a common thread among the pieces, which sometimes is obvious and sometimes is not. The goal is not so much to include pieces that are similar to each other, but rather a collection of works that are on one hand very different, but that may also resonate, shed light on each other and interact in the context of the program”.

I asked Shai if he would be bringing the new piece into the studio, and he had this to offer: “We hope to be able to record the concerto in the next couple of years. There are also plans for another solo CD and potentially a concerto CD as well that are being discussed. As far as programming is concerned, I am trying to find ‘organic’ ways to fit free improvisation into recital programs. There is nothing new in the concept, of course, and it used to be in fact part of tradition. But I am currently looking for a way to combine it with other repertoire in a meaningful way.”.

Click here for tickets to Shai’s concert with the Seattle Symphony at Benoroya Hall.