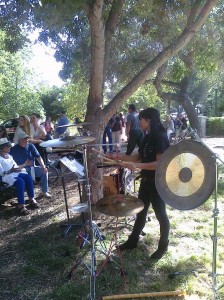 The 66th annual Ojai Festival was kicked off with the West Coast premiere of Inuksuit, the 2009 composition by John Luther Adams. Staged outdoors and directed by Steven Schick, some 46 percussionists and 3 piccolo players performed the 60 minute piece amid a large crowd in Libbey Park. The audience was encouraged to walk among the many scattered percussion sets, making the experience more like visiting a sound installation than attending a concert. Inuksuit is named after the distinctive stone markers of the Arctic Inuit peoples and the printed score has the outline of one such sculpture.

The piece begins quietly, the players imitating the sound of a soft breeze using cardboard megaphones, others rubbing rocks together and some with rattles – all moving outward from a central point through the crowd. At first the audience was not sure what to make of this – cell phones were answered and conversations continued – but eventually everyone quieted down as wind tubes were swung overhead simulating the eerie whistling of the wind through rocks or cliffs.

Distant horn calls from around the perimeter of the crowd followed, sounding a bit like moose calls. Drum beats, like the random thudding of rain drops, began to sound all through the assembly increasing in frequency and tempo much like an approaching storm. Cymbals followed and by now the crowd was fully engaged and circulating among the players. The drumming increased in intensity, along with loud cymbal crashes and rolls, as if standing on the banks of a roaring river.

The entire first half of the piece was essentially one long crescendo that could be reasonably heard as a convincing percussion sketch of a walk in the Alaskan wilderness. But just at the halfway point and at the peak of intensity, Adams introduces a series of sirens and bells into the mix – a distinctly urban sound. This departure from a strictly pastoral viewpoint is a masterstroke – it connects the urban listener with the environment most familiar to them. The sirens gradually abated and the second half of the piece declined in volume and intensity as the loud drumming slowly subsided.

At about 50 minutes into the piece, players holding triangles appeared around the edges and began moving inward through the crowd to the center. Their airy sounds created an ethereal quality, like the sprinkling of a light rain shower after a storm. The crowd followed, converging on three oak trees where piccolo players had been placed, standing above everyone on the lower branches. What followed was impressive: the piccolos issued a series of soft, bird-like calls that were answered by a few rapid bars of xylophone from several of the percussion stations. There was a sort of magical quality to this after all the drama of the heavy drumming. As the time between the piccolo calls and answers gradually lengthened, the sounds of children playing and cars making their way along the Ojai Avenue gradually became an integral part of the piece. In its final minutes Inuksuit manages to blur the distinction between performance and ambient life, achieving a sort of Cagean ideal by intersecting the musical arts with the outside environment– an impressive accomplishment.

The evening program was staged at the Libbey Bowl, an outdoor performance shell that was significantly upgraded in 2011 with improved , lighting, stage area and seating. Thankfully the upgrades included a decent sound system that proved its worth in Red Arc/Blue Veil, a 2001 composition by John Luther Adams scored for piano, percussion and processed sounds. This was ably performed by pianist Marc-Andre Hamelin and the aforementioned Steven Schick on percussion. Red Arc/Blue Veil features processed sounds that rumble and swell in and out of the foreground while the piano and percussion counter with rapid arpeggios. All of this creates an engaging texture and pleasant harmonic structure that reaches toward a sort of mystical quality, often succeeding. Credit here to the sound engineer who kept the balance between the recordings and the players to an agreeable level – the acoustic instruments could have been easily swallowed up. The outdoor ambiance of the Libbey Bowl did intrude, however, at the very end of the piece as it gradually dies away – some street noise broke the spell prematurely. Still, a credible outdoor performance for a piece better heard in the concert hall.

Following Red Arc/Blue Veil was the formidable Six Poems of Marina Tsvetaeva (Op. 143a) by Dimitri Shostakovich. This was written in 1973, well after the trials and tribulations that Shostakovich had suffered under Stalin, but it reflects the anger and frustration of a life lived in difficult political circumstances. The work was performed by mezzo Christianne Stotijn and pianist Leif Ove Andsnes. The Six Poems of Marina Tsvetaeva are, by turns, solemn, melancholy, defiant, sad or resigned and these emotions were powerfully expressed by Ms. Stotijn who sang marvelously. Credit again to the sound system for bringing each nuance out to the lawn seating.

The concert closed with Piano Sonata No. 2, “Concord” by Charles Ives. This was performed with a fine touch and expressive feeling by Marc-Andre Hamelin. The ‘Concord Sonata’ is written in four sections, dedicated to Emerson, Hawthorne, the Alcott family and Thoreau, New Englanders who together shaped Ives’ thinking. This piece was written 100 years ago, and admittedly Ives revised it all during his lifetime, but it seems completely contemporary to our time and place. It is elegant, playful and nostalgic music, but it is right at home in the 21st century. The appreciative audience gave Hamelin a standing ovation for his carefully controlled, yet intense reading of this challenging work.