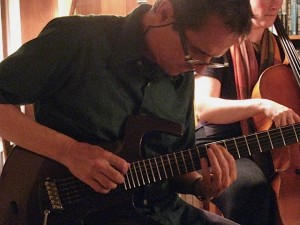 John Shiurba is a composer and guitarist based in Oakland, California whose artistry embraces improvisation, art-rock, composition and noise.  In his composer capacity, he’s headlining the second night of the 11th Annual Outsound New Music Summit, an evening entitled The Composer’s Muse.  The concert will take place on Thursday, July 19th at 8:00 p.m. at the San Francisco Community Music Center, 544 Capp Street, San Francisco.  Tickets are available at the door, or online through Brown Paper Tickets.

Shiurba’s world premiere work for large ensemble, 9:9, is a suite of nine pieces written to be interpreted by nine players with a conductor.  (Any reader who is familiar with his work will recall his affinity for numbered concepts, in past works such as Triplicate and 5 x 5.)  The score will explore the demise of the print medium through nine different types of notation, all of which are derived from newspapers. The nine players will be called upon to interpret standard music notation along with graphic, textual and pictorial notation, allowing the ensemble some creative input in the interpretation. The form of the suite will be open, allowing the conductor and the players to spontaneously shape the way the music develops in real time.  Shiurba will serve as conductor of his own piece next Thursday night.  He was also kind enough to take time out to answer some of my questions.

S21:  Sequenza21 readers have read about you before in your role as a guitarist in SF Bay Area improvising ensembles.  How does your guitar playing inform (or not inform) your compositions?

JS:  My experience as an improvising guitarist perhaps affects my compositions mostly by way of contrast. When I seek to interject something composed into an improvising ensemble, I tend toward something that the ensemble wouldn’t otherwise do. So usually I choose pitched tight rhythmic phrases that contrast wildly with the mostly arhythmic timbral material that typifies my improvising. Whether or not my approach to the guitar actually affects the music that I write probably depends largely on what music I’m writing. In the case of one of my more rock oriented projects, where I’m writing actual guitar music, undoubtedly my own guitar language (and my limitations) will factor significantly in what I write. When I’m writing for other instruments, then probably not so much. I’m not much interested in creating ways of notating the things that I (and others) do in an improvised situation– I’m happy to just let that happen as it will, and write something to contrast it.

S21:  Before we talk about 9:9, we ought to fill readers in about 5×5.  How did that project come about and where does it stand right now?

JS:  5×5 came about as a result of my dissatisfaction in playing either only improvised or only composed music. So I simply combined the two things. I chose 5 for this project, because that seemed like an ideal size for an improvising ensemble, as well a a good number of written pieces to make up a set of music for a concert or a CD. And as I mentioned earlier, I really wanted the written music to markedly contrast the improvisation, even to interrupt the flow. At first I made a point of telling the players not improvise with the written material, as a jazz player might do. What I am after is an organic group improvisation that is occasionally derailed by the interjection of written music, which will hopefully send the subsequent improvisation in a new direction.

When I initially visualized 5×5, I imagined a matrix of 5s. There are 5 players, 5 pieces and then I planned to write 5 “books” of those pieces, and then 5 “levels” of those books. The first level would be unison, the second level would have two-part counterpoint, and so on until the fifth level, where each player would be playing a different part. This is something that I changed my mind about as soon as I got to the second level, because I realized that increasing the complexity was compromising the contrast that I was after, even with just two part polyphony. So I abandoned the increased complexity, and have since stuck with unison lines. I do still plan on writing 5 levels of the 5 books.

I have also experimented with transposition– having B-flat and E-flat instruments reading concert parts, and transposing other concert parts to another key, as well as with the use of ambiguous accidentals– notes that can be sharp or flat at the players discretion.

Although my initial conception of 5×5 was for the quintet to be one of my typical improvising ensembles, I have also tried it out as a chamber music ensemble with conducted improvisation, and as a rock band.

JS:  9:9 only relates to 5×5 in as much as they share the number matrix concept. In 9:9 there are 9 players, 9 types of music, and 9 sections within the 9 types. In addition the entire piece utilizes a 9-note scale. The actual structure of the piece is a bit more open-ended with 9:9, but there’s a lot more composed music in the mix. While any two 5×5 performances will have essentially the same form, each 9:9 performance will not. Not unlike 5×5, 9:9 will be a continuous suite which will largely be framed by the 9 primary compositions, but what happens in between will vary from performance to performance.

While I think of 5×5 as an ideal size for an improvising ensemble, I look at 9:9 as too many players to just cut loose and improvise. What I’m after with 9:9 is a layering of composed parts, some of which are quite exact, and some of which are open ended. I’m also interested in a wide range of density from a single player to all nine.

S21:  What’s the instrumentation of the 9:9 and what’s each part’s significance in the message of the piece?

JS:  The 9 players are divided into two different sets of three trios. For the 9 primary compositions (what I call 9:9-A) the trios are 1- voice, violin, bass clarinet;  2-voice, cello, clarinet; 3-guitar, bass, percussion. Each of the vocalists is also an instrumentalist– one on piano, the other on flute. So the trios can also be arranged by instrument type, 1- violin, cello, bass; 2- flute, clarinet, bass clarinet; 3- piano, guitar, percussion. It was important to me to have the vocalists present for the A sections, but not throughout the entire piece.

Besides this concern, I’m not sure that the instrumentation itself has a bearing on the message of the piece. While I never thought of the piece has having a message as such, it is intended as an elegy for/ celebration of the old fashioned print medium– the entire piece was culled from the newspaper in some way. I had piles and piles of newspapers that I would comb through looking for ideas. The score consists of everything from charts and graphs that I cut out of the paper, to precisely notated music that I wrote based on headlines, or other things I culled from the paper.

S21:  I’ve had a look at the 9:9 score and I see two vocal parts with text, one which is very abstract and one which is in recognizable English and humorous.  How did you come to choose and combine the two?

JS:  The pieces in 9:9-A that you are referring to were composed using the Crytoquip puzzle that would usually appear in the comics/crossword section of the paper. The puzzle is an encoded quip, where each letter is replaced with another letter, and the object is to translate the code. So my idea was to set the two parts to music with one singer singing the puzzle, which is gibberish and another singer singing the solution to the puzzle which is a silly quip, usually a pun of some kind. The two voice parts are of course quite different– something like “GN ZRN GM DX D JN F IF RD” is bound to sound quite different from “yesterday I heard one sand hill say to another are- you dune anything tonight.” I thought that the contrasting language would make for an interesting juxtaposition, and I had a lot of fun working with this text.

Another thing that influenced the way these pieces and eventually the entirety of 9:9 developed was my choice to limit myself to a 9-note scale. This came to me after reading Georges Perec’s novel La Disparition (A Void in translation). Perec wrote the entire novel without using the letter “e” and amazingly the translator did the same. I thought that a similar limitation while  composing music would push me into a new area. I eventually settled on leaving 3 notes out, because I thought that would strike a balance between all 12 notes and a typical 7-note scale. The 9-note scale I chose definitely has a tonal quality to it, but allows for some pretty atonal sounding passages as well. I had already written some of the music when I embarked on the 9-note approach, so I had to go back and change it, which was somewhat torturous for someone like me, who really obsesses over each and every note. Being forced to let go, and just change the notes, was a valuable process for me.

S21:  Will there be another 9:9 after this one?  Or you have plans to go even bigger in numbered-concept works?

JS:  So far I have thought of this as the one and only 9:9 piece, but that may change in the future. Rather than going on to even bigger numbers, I think it’s more likely that I will develop one of the smaller number pieces. I have already presented pieces in 5×5, 3-3 and 1_1 series, so I look ahead to 2,4,6, 7 and 8, although as you can see I have an inclination to go with the odd numbers. Maybe I should get over that!