A Conversation With Dr. Noreen Green of the Los Angeles Jewish Symphony 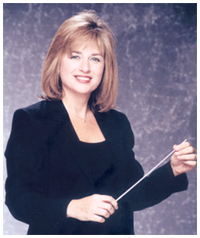 The great diversity of the Los Angeles area has produced a wide variety of cultural institutions and one of those is the Los Angeles Jewish Symphony (LAJS) – an expression of the sizable Jewish community here. The LAJS is “Dedicated to the performance of orchestral works of distinction, which explore Jewish culture, heritage and experience. It also serves as an important resource for aspiring composers and musicians. As part of its mission, the Los Angeles Jewish Symphony is committed to building ‘bridges of music’ and understanding within the diverse multi-ethnic communities of our great city.”

The LAJS marks its 18th or ‘Chai’ anniversary this year with a concert on August 26 titled ‘Chai-lights – Celebrating 18 years of Jewish Music‘. The concert includes a contemporary work ‘Klezmopolitan Suite‘ by Niki Reiser, in its US premiere. Past concerts have included themes from bible stories, the Sephardic-Latino connection, a tribute to Jewish film composers and many educational performances given throughout the city. As part of its mission, the LAJS actively commissions new works and often includes contemporary pieces in its programming.

Dr. Noreen Green, artistic director, conductor and one of the founders of the LAJS, recently met with Sequenza21 to talk about Jewish music, the LAJS and the process of programming and selecting new pieces for performance.

So what is Jewish music and how do you program it? Dr. Green describes: “People have this idea what of Jewish music is – like its bas mitzvah music – so I try to take it beyond. We do a lot of klezmer, but we do it within the framework of the orchestral instruments so it expands the colors of what klezmer is – I think it adds another level to it. And we also do Castelnuovo-Tedesco [an Italian-Jewish composer who came to Los Angeles in 1939 as a refugee] and we also do Bloch and we also do Korngold and a lot of the film composers. Being a good programmer is really key to how the audience is going to react. Whatever you want to say, we are entertainment dollars, so we want people to come and feel like they have had a high musical experience, but in addition I want them to feel like they have learned something – and had a little fun.”

How do you go about selecting new music for the LAJS? The process, admits a smiling Dr. Green is ‘mystical’, but she declares: “Well, it’s all subjective. First of all, I have to like it. I have to make sure it also fits into whatever theme the concert is. I will commission [a piece] within a theme, like the Istoria Judia, the piece had to fit into the whole.”

The Istoria Judia concert this past March had as its theme the expulsion of the Jews from Spain after 1492 and featured a commissioned work by composer Michelle Green Willner. There was a close collaboration between Dr. Green and the composer as the piece was written, but this is not necessarily the case for new music programmed by the LAJS.

Dr. Green explains: “I seek out the people I want to work with. Now of course there are a lot of people come to me and say ‘will you perform my music?’ – that’s more difficult. …I get bombarded with scores – as you can imagine. The ones I don’t even look at are the ones that come without an initial solicitation – a note or letter [from the composer] that asks ‘would you be interested in something like this?’ I have to come up with a kernel first – something to work from – then I go and seek out music. I have a file – and when people will say ‘I have a cello klezmer concerto – would you be interested in that?’ – and I’ll say ‘Maybe in the future but send me some information’ and that goes in the file. I’ve just done our repertoire for next year, so I went back into that file to see what I had – and I didn’t remember some of the things that had been sent. It can take several years sometimes, before a new piece fits into our programing.“

The LAJS does just a few concerts a year, so the opportunities for new music to be performed are also few, even given the commitment to programming it. It can take years for the right combination of theme and music to converge. This was the case with the ‘Klezmopolitan Suite‘, a work that has been around for some time. Dr. Green describes: “I think what is interesting about the Klezmopolitan Suite is that when I read the description of the themes that he [composer Niki Reiser] took, it encompassed all of the elements of what the Jewish symphony is about, because it uses Sephardic themes, it uses Ashkenazic and it intermingles those two main streams of Judaism in a very interesting and ingenious sound. It has ethereal sections and then it has the real flat out klezmer sections – and how he balances these out – I think it is an ingenious work and I’ve been wanting to do it for 10 years.”

How has new music been received by audiences? According to Dr. Green: “It depends on the piece – some people like it and some people hate it! And that is one of the beauties of new music, it engenders discussion.. and I think it’s great when people have very strong reactions to music. I would say 90% of the time mostly people like it, but sometimes people will say ‘well, that didn’t really resonate with me’. [and I say] ‘Great, didn’t resonate with you – but somebody else was crying during it’. It is similar to the way everyone reacts differently to a movie and that is part of the beauty of live performance. If you sit in front of the computer to watch something or listen to it on the radio – that is not a public experience, it’s not a shared experience – and I think we all need more of that, a shared, live experience.”

And that is as good an argument for live performance of new music as you will find!