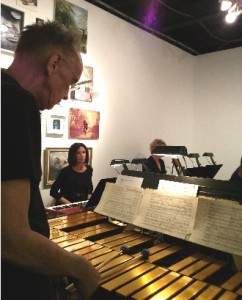 Liquid Skin Ensemble teamed up this weekend with the dance company Naked With Shoes for an evening of new music and choreography at the AndrewShire Gallery in the vibrant Koreatown area of Los Angeles. Two concerts were given – July 5 and 6, 2013 – consisting entirely of works by Steve Moshier and featuring the premiere of a new piece, Guilt of the Templars. Original choreography was provided by Jeff and Anne Grimaldo, and also dancer Mary Stein.  The AndrewShire art gallery is an intimate space – holding maybe 40 people – and the arrangement of audience seating, musicians and dance space, while imperfect, was the best that could be done. The sight lines and acoustics in this venue are not ideal, especially given the dynamic power of Liquid Skin, but this did not detract significantly from the performance. The dancers also coped well with the limited space.

The Liquid Skin Ensemble has been a presence in the Los Angeles new music scene for over 13 years and their trademark rock-solid playing is a happy consequence of the stability of the personnel – the seven members of this group have played together for a long time and it shows. The mix of guitars, keyboards, saxophone, electric bass and Moshier’s vibraphone make for a balanced combination of percussion and sustained sounds that were used to good effect throughout the concert. Works dating from 1981 up to the present were included in this concert and gave a sort of historical arc to the programming.

The music of Steve Moshier falls squarely within post-minimal/neo-tonal tradition with propulsive percussion and driving rhythms such as were heard in the opening piece Shakeout (1981). The dancers here responded accordingly with a sort of fight scene that mirrored the high energy in the music. This was followed by Hidden Face (1990), a slower, more introspective piece that felt much more fluid and relaxed. Hero of the Blast Furnace (1983) featured more fast and hard rhythms with the dancers artfully including chairs in their choreography.  Lost Souls (1991) gave the dancers another workout with chairs and a strong beat. The call and answer between the saxophone and vibes was particularly effective here and at the end the dancers were fully extended across the chairs, exhibiting an enviable agility and athleticism. 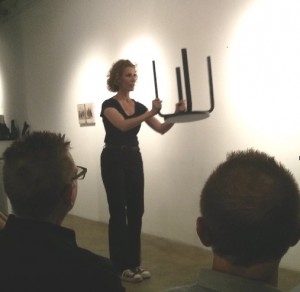 Two Liquid Skin pieces were offered without choreography. Cross the Wounded Galaxies (1985) has a light, airy texture that starts in the vibraphone and is variously joined by guitar, woodwind and keyboards. Different combinations of the instruments pass the theme around and the swelling tutti sections, when dominated by the saxophone, are especially effective. Leaving Paphos Ringed with Waves (2010) was probably the most serene piece in the concert – quiet, simple and almost chant-like.

This set the stage for the premiere of Guilt of the Templars: for the Liquid Skin Ensemble (2013) and this was accompanied by dancers Anne Grimaldo and Mary Stein. The title suggests some sort of dark, medieval thundercloud of a piece, but it is actually a light, cheerful work that begins with the dancers bouncing two large rubber balls back and forth in a sort of game. Gentle and disarming, the piece quickly acquires a child-like charm. The two dancers are both very tall women and this piece was subtitled ‘Too Long Ladies’ – a truth that was ironically disguised by their costume and playful choreography.

About midway into the piece the accompaniment by Liquid Skin Ensemble ceased and the dancers sang out several of the tall cliches that they must have been endured growing up: “How is the air up there?” and “My, you are a tall drink of water!” – a sort of cathartic release that generated an empathic response from the audience. They then sang several of the old Doublemint Gum tunes – a parody put down of the old sexist jingle that invites you to ‘double your pleasure, double your fun’ – and this was received with a knowing laugh by the audience. A video followed, projected on the wall,  showing the ‘Too Long Ladies’ outdoors on sidewalks, streets and curbs performing dance steps on everyday objects underfoot. The video was accompanied by Liquid Skin, and as is the case with music skillfully written and performed for a film or video, you forget that the musicians are even in the room. The dancers may have stolen the show in this piece, but Guilt of the Templars was a fine finish to an evening of good music and skillful dancing.

The Liquid Skin Ensemble is:

More information about the AndrewShire Gallery is here.