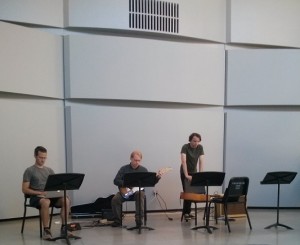 The two-week long series of experimental music concerts in and around Los Angeles concluded Saturday, August 17 with es geht weiter a reading of nine compositions from members and friends of Wandelweiser, an international group of composers and performers founded in 1992. The event was held at the Wild Beast performance space on the Cal Arts campus in Valencia and was curated by faculty and Wandelweiser member Michael Pisaro.

Twelve musicians in various combinations performed the nine pieces and a number of these works were heard in the US for the first time. The instrumentation varied widely – including found objects, standard instruments played normally or by coaxing out new sounds, voices and various electronics. Many of the pieces were very soft with long pauses and this invited a high level of alertness and concentration from the audience.

The nine works offered in this concert were highly varied in their instrumentation and approach – here are some random observations and reactions:

Through the window and the wood – Daniel Brandes. Very soft solitary electronic tone that slowly increases in volume, is then joined by a voice and followed by silence for several minutes. The most subtle of pieces, the long silences and low dynamics are effective in putting the listener in a heightened state of anticipation.

Marches (2010-2013) – Jeromos Kamphuis.  The most conventional-sounding of all the works performed, this piece was reminiscent of a stately chorale tune that could have been a prelude played in church. Performed by Dante Boon on piano, Marches (2010-2013) has an introspective, almost spiritual feel to it that is at once charming and captivating..

symphony, 2010 – Jason Brogan.  The program notes stated that this was to be performed by ‘everyone’ but instead of all the musicians assembling to play, the outside door was opened, a chair was dragged across the floor, a notebook was dropped.- it was intended that the audience would provide the sounds. This led to a few moments of noisy confusion and uncertainty but created in the observer’s mind an interesting ambiguity between the performance and the routine.

2 Delen (after Sam Sfirri) – Dante Boon.  Another subtle work featuring electric guitar and voice. The guitar plays a slow ascending scale and at certain points the voice joins. The pure pitches made for some beautiful sounds and overtones. When the voice and guitar met in unison a new cycle would start.

Von Bingen Backgrounds – Johnny Chang.  Two guitars, one sounding a single pure tone, rising in volume until it almost seems like feedback, followed by silence. Now two single tones, one from each guitar, rising in volume and with a beat frequency between them. A voice is added and this evokes a feeling of lonely isolation. The voice now dominates the texture and the overtones mingle. The interplay between the guitar sounds and voice when near the same frequency is intriguing and produces a haunting effect when the singer changes the pitch slightly. An impressive finish to this concert of experimental music from Wandelweiser.

The works performed in concert order were:

The musicians appearing in this program were: