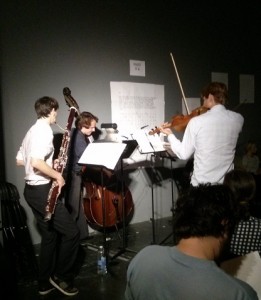 On August 9, Christian Wolff’s Changing the System (1973) was performed by the new experimental music group Southland Ensemble, in the heart of historic China Town here in Los Angeles. About 40 people filled Automata, a small space at Chung King Court dedicated to the experimental arts, to hear Wolff’s politically charged and innovative work that utilizes graphical scoring designed to inspire a kind of consensus-driven interpretation from the players. Enlarged reproductions of the score were hung on the walls and the audience was encouraged to walk about and inspect them during the performance.

Christian Wolff is the last surviving member of the New York School of experimental composition that famously included Morton Feldman and John Cage. In fact it was Wolff who gave John Cage a copy of I Ching , stimulating that composers use of random processes in composition. And Wolff himself, according to the program notes, sought “to turn the making of music into a collaborative and transforming activity…” allowing the players to work out the realization of the piece within the guidelines of the score.

Changing the System was presented in two parts and in the first the players were divided into two groups: strings and a  bassoon at one end of the space and woodwinds, a trombone plus electronics at the other. The piece proceeds in a series of passages initiated by one of the players, whose pitch and duration are guided – but not specified – by the graphical scoring. A different player then initiates a new passage and this pattern continues. The playing in this section was confident and with

good intonation. The warm sonorities of the lower strings and woodwinds gave a surprisingly smooth feel to this – even in the dissonant sections – and there were some very beautiful chords heard as this part progressed. The generally legato approach by the Southland Ensemble to this piece seemed to serve it well. Wolff’s music characteristically incorporates pauses, and occasionally the outside street noise would filter in and crickets could be plainly heard.

After a short intermission the second part of Changing the System began with the players realigned in the performance space. A percussion group, consisting of metal pot lids, glasses, stones and other assorted found items were placed at one end and voices with microphones opposite. The political context of Wolff’s piece is most evident here – Changing the System was written in the turbulent 70s at the height of the Viet Nam war protests – and this section is based a speech given by anti-war activist Tom Hayden. Here is an excerpt that sets the tone:

“It’s the system itself that sets the priorities that we have, that distorts the facts, that twists our brains and therefore the system would have to be changed in order to change priorities and to make it possible for us to really see what’s happening.”

This section proceeds with the percussion sounding in triggered patterns in the manner of the first section, while Hayden’s speech is spoken in short, repeated phrases by the voices. The voices variously divide up each sentence into fragments, sometimes with two independent voices speaking different syllables in a single word. The effect is something like those old text-to-speech computer programs – but the disjointed cadence causes the listener to concentrate on the words, thus heightening their meaning. To my ear the percussion could have used a bit more presence – the metallic sounds were sharp and certainly loud enough – but something with more “clank” might be considered next time. In any event the political message of Changing the System was skillfully transmitted intact from 1973 to the present in all its chilling relevance.

This concert by the Southland Ensemble is part of a wider effort among musical groups to find new ways to present music to a public increasingly apathetic to the traditional concert hall experience. This performance of Changing the System had all the essential ingredients: exotic venue, political relevance and a score that gives wide latitude to the performance realization. The outcome for the audience is that it is more of an event to be experienced and less like a concert that is simply attended and heard. The space for this performance was cozy, and perhaps would have been better suited to the experience if it was larger, allowing more movement among the posted scores – but it all made for a memorable evening.

This performance is part of a two-week long concert series of experimental music in and around Los Angeles. Most of the events are free and will include, among many other things, performances by the Dog Star orchestra, music of Morton Feldman and Dante Boon. 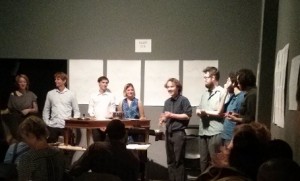