Sean Hickey Feels Good (Just Like He Knew That He Would) 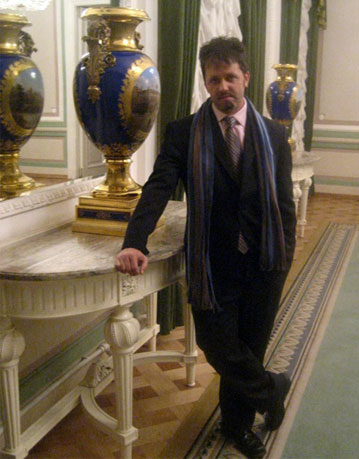 If there were a contest for hardest working man in New Music, my choice for a winner would be Sean Hickey. The personable 43-year-old Detroit native is not only a husband and father and a top classical music industry executive with a serious day job, he is a prolific composer of eloquent, stately music that manages to engage (or, at minimum, not enrage) the post-modern crowd through the sheer originality and persuasiveness of its musical ideas–without sending the blue hairs scurrying for the exits. Like his original inspiration, Igor Stravinsky, and well-known contemporaries like Daniel Asia, Michael Daugherty, Aaron Jay Kernis, Libby Larsen, Lowell Liebermann,Paul Moravec, and Osvaldo Golijov (Have we forgiven him yet?), Hickey writes music that is enjoyable to listen to. Not easy. Enjoyable.

He also arranges music, writes travel articles, helps any friend who needs it and occasionally mows lawns on big estates in Westchester.

The release of his Concerto for Cello and Orchestra and Concerto for Clarinet on Delos has solidified his reputation as a formidable new classicist whose work demonstrates where American music might have gone had the heirs of  neoclassic Stravinsky, Ravel, Hindemith, Milhaud, Martinu, Honneger and their tuneful ilk taken over music academia in the 50s and 60s instead of the mathematicians.

Hickey’s route to a music career is a familiar one for talented kids of his generation –he got himself a guitar and learned how to make it talk.

“I grew up on AOR radio and collected a lot of albums that I bought by doing odd jobs around the neighborhood,” he says. “One summer when I was about 12 my mother said you’re not just going lay around the house for the next three months; you have to do something. I thought of two things–learn karate or learn to play the electric guitar. I chose the guitar. But my dad, who worked for Ford Motor Company, wasn’t totally convinced that I would stick to it so we drove to a music shop downtown and rented a guitar for a month to see how it went. I remember I held it on my lap all the way home and fooled around with the strings and picked out a couple of simple tunes. By the time we turned into our driveway about 20 minutes later I knew I wanted to be a musician.”

His first real encounter with “serious” music happened when he was 15, he recalls, when his parents took him to Chicago for a few days and they went to see the Chicago  Symphony, led by George Solti. “The first piece on the program was Stravinsky’s Symphonies of Wind Instruments. I remember this big cavernous hall and lots of chairs on the stage, most of them empty, and this small group of players performing this absolutely haunting and beguiling music. I thought to myself: I can do this. I want to be
a composer.”

Because his instrument was the electric guitar, Hickey had skipped the traditional beginning classical phase so he began devouring Stravinsky and his peers and even more modern music–Cage, Stockhausen, Feldman. He continued to perform but his ultimate route to a music career was clear to him. “I had a band called Phineas Gage, that was doing pretty well at the time, and I decided to stay in Detroit  to attend college, first at Oakland University where I studied jazz guitar and then at Wayne State University where I graduated with a degree in composition and theory.” His primary instructors were James Hartway, James Lentini and Leslie Bassett.

It was during this phase of his life that he began to compose in earnest. He knew a lot of musicians and began writes pieces for them–solo instruments like piano and clarinet, at first–and gradually expanding into larger scale pieces. They started getting performed and–like most young composers who hear their pieces played–Hickey was hooked.

His other career–as a record industry executive–began in his early 20s when he got a job in the classical music department of  Harmony House Classical record store in the Detroit suburb of Royal Oak and rose quickly to become assistant manager.

“Harmony House was a Michigan-based chain that had 41 stores at its peak and this was one of two that were devoted to classical music,” he says. “For me, it was a lot more fun than delivering pizza and I had this naive notion that one day Neeme Jarvi would walk in and I would get to meet him…and that did happen. From there I went on to become a sales rep handling the midwest for Allegro. This was at the absolute height of the CD wave and they were growing like gangbusters. That’s how I got to New York; they moved me here in 1998 to be one of the two sales reps. I had already decided that this is where I needed to be for my composing career but that move eased the way. I moved to BMG for about a year but I had started around 9/11 and could sense that the industry was about to change. When Naxos called, I decided that looked like a better future. I was right; Naxos is a very successful company and has grown tremendously over the past decade.”

Hickey joined the company eleven years ago and is now National Sales and Business Development Manager for Naxos America. With album sales in general now reaching their all-time low in the U.S,,  Naxos’  low-cost business model (in most cases, Naxos requires the composer or performer to deliver a finished master recording, which the
company manufactures, packages and distributes). international reach, strong online presence, and its distribution network of more than 300 music producers,  Hickey’s decision looks increasingly prescient.

In 2002, Hickey married Catherine Jhung, an actress and former dancer, who was born in Westchester, grew up in the Bay Area of California, and has now come home to Brooklyn.  Right now, she’s studying for a masters in early childhood education with plans to teach. Their son Shannon was born in 2005, will start the second grade this fall, studies dance at the ABT and–predictably enough, given his parents’ achievement levels–has already made his stage debut at the Metropolitan Opera.

Hickey says that Naxos founder Klaus Heymann had no idea that he was a composer when he joined the company but he kept sending him tapes which resulted in the release of Hickey’s first CD–Left at the Fork in the Road–in 2005. Comprised of mostly short chamber works (much of it for winds), Left at the Fork in the Road earned a heap of praise and–thanks to Hickey’s promotional skills–sold better than most new recordings by “unknown” composers. 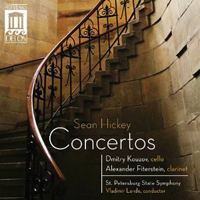 His new Delos recording is a much bigger and bolder statement. Featuring soloist Dmitry Kouzov in the Cello Concerto and Alexander Fiterstein in the Clarinet Concerto, maestro Vladimir Lande leads splendid St. Petersburg orchestras in performances that demonstrate Hickey gift for harmonic invention that is at once melodic and challenging, mournful and joyous, conservative and modern, pre-serial and post-romantic.

Writing in NewMusicBox the estimable Frank J. Oteri says that on the surface Hickey’s concertos, “…seem extremely formal, almost old fashioned.  Both are cast in the  traditional three-movement concerto form that has been the norm since the 18th century. But behind this scaffolding is a very personal artistic response to the huge breadth of music that was created in the 20th century when every tradition was challenged. In its reconciliation of these seeming polarities, it is very much music of our own time.”  Of the clarinet concerto, Oteri writes: “…the ravishing clarinet melodies that pervade the slow middle movement of  Hickey’s concerto…is something that makes me think in my wildest dreams—or maybe they’re not so wild—that this piece could actually become standard repertoire one day.”

Despite his heavy workload, Hickey remains astoundingly prolific.  His web site lists 25 works produced in the last decade. The big question for those of us with human amounts of energy and drive is, can he keep it up?

“It’s not easy but I think my life up to this point has prepared me somewhat for it. Nobody I know at Naxos works less than 55 to 60 hours a week–sometimes more. I travel a lot to work with sales reps and our major retailers,” he says. “The good thing is that I can work at home when I’m not traveling and that helps a lot. The big adjustment has been to learn to write music anywhere, anytime, under any circumstances. When I was single and living in Detroit, I could put aside four or five hour chunks of time to compose, in a quiet room, with a piano, I don’t really have that luxury anymore so I’ve had to retrain myself to compose when the time presents itself, which often means starting late at night.”

A couple of weeks ago, I stumbled across this revealing little gem that Hickey had posted on his Facebook page.  I thought it was a good summation for the life of the hardest working man in New Music:

1 AM and it’s the busiest time of the day for the hamster outside my office door, going round and round on his wheel while I work without the remotest end in sight. It’s comforting to have a four-legged metaphor for a pet.

He doesn’t really mow lawns on large estates in Westchester.  I just made that up,