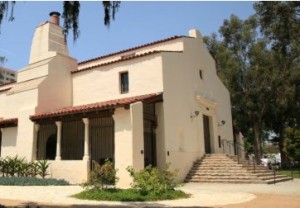 The City of Santa Monica was the scene Friday, May 2, 2014 of HEAR NOW Goes Electroacoustic, the first in a series of three consecutive concerts featuring music by contemporary Los Angeles composers. Presented by HEAR NOW and People Inside Electronics the six works in the program all included some kind of electronic accompaniment. The Miles Memorial Playhouse was filled and the cozy, Spanish Colonial style performance space with its wooden ceiling beams and stucco walls provided good acoustics and excellent viewing. This concert was dedicated to William Kraft and the composers offered a few remarks prior to the performance of each piece.

Theremin’s Journey (2010) by Gernot Wolfgang was first, and this began a low rumble of processed sound accompanied by bell-like chimes that was soon joined by the theremin. The distinctive sound of the theremin is invariably linked with 1950s science fiction movies, but in this piece the alien, otherworldly sound connected nicely with the underlying electronics, even when the theremin was dominating the texture. The sound of the theremin was an integral part of this piece and not simply a stylistic effect. Joanne Pearce Martin provided solid control over the pitch and entrances of the theremin and her virtuosity was all the more evident when she switched to the piano as the piece progressed. Theremin’s Journey proceeded in this way, with Ms. Martin alternating between piano and theremin. There was a more familiar feel to this piece when the piano was heard, and a sense of movement and energy was provided by several fast runs and short bursts of phrases. At other times the piano was unaccompanied, or gentle and reflective. By contrast, the sections featuring the theremin typically had a distant and sometimes lonely feel. The balance between the various elements – electronics, piano and theremin – was remarkable and the playing was controlled and consistent. Theremin’s Journey could have easily failed on several levels – technical issues, performance difficulties or by simply sounding cliché, but this high-risk piece came off successfully and convincingly on its own terms. 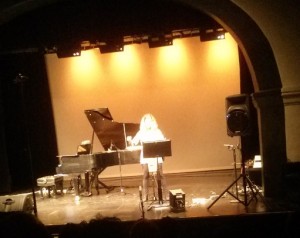 What Lies Behind the Rain (2011) followed, by David Werfelmann, a piece written for piano and electronics. Interestingly, the electronics were not simply a static presence but were triggered by the tones played by the performer at the piano. According to the program notes “Acoustic and electronic sounds blend and support each other, creating a sound world that could not be achieved by either part alone.” For the most part, this worked. Many of the electronic tracks were processed piano sounds, and when these were added to the live playing of Rafael Liebich the result was a kind of multiplying effect that produced sudden rushes of notes and fast swirls of sound. Trills in the piano could produce an avalanche of similar sounds from the electronics and this effectively evoked a sudden downpour or rain shower. There were also several passages that felt like driving on the freeway at night with cars quickly passing by. At other times the electronics gave out a majestic sound of bell chimes that, when combined with the sensitive touch of Liebich in the quieter stretches was quite lovely. This combination of triggered electronics and live performance deserves further exploration as was evident by this intriguing reading of What Lies Behind the Rain.

The third piece of the evening was Get Rich Quick (2009) by Ian Dicke and this was the Los Angeles premiere. Get Rich Quick was inspired by the financial crash of 2008 and is written for piano with recorded  narration and sound effects . Aron Kallay, a co-founder of People Inside Electronics was the pianist. In his remarks just before the performance, Ian Dicke wondered aloud about the relevance of this piece in 2014 because, after all, “Congress passed financial reform laws and the bankers that caused the crash are all now in jail.”  This was the perfect introduction to Get Rich Quick which begins with the sound of a coin dropping and the bustling noise of a stock exchange trading floor.  A series of sharp, loud chords sound from the piano build tension while the narration smoothly pronounces a series of familiar platitudes: “Debt is a part of American life!”, “Debt has a time and place.” and “Pay those bills on time!” The vapid, infomercial tone of the text contrasted perfectly with the anxiety building in the piano and this provided the wit that propels this piece. The piano gestures are familiar but they make a telling commentary on the get rich quick narration. The program notes state that “Ian Dicke is a composer inspired by social-political culture and interactive technology.” New music these days often seems to arise in a political vacuum, but Get Rich Quick points to another way and the audience was both receptive and appreciative.

After the intermission Jugg(ular)ling (2005) by Vicki Ray was presented. In her pre-performance remarks Ms. Ray explained that the inspiration for this piece was the extreme multitasking required by our contemporary existence – all the things that conspire to keep us too busy. As Jugg(ular)ling began, old film clips of circus jugglers was projected on the stage screen. For each item juggled, the score called for a gesture by the musicians playing piano, violin and MalletKAT percussion.  At first the jugglers had one and then a few balls or pins in the air and the music proceeded in an orderly fashion. As the number of items juggled increased, so did the complexity and speed of the musical responses, and this generated a sense of anticipation that added to the comedy on the screen. As the number of items in the air reached their maximum the music slowly unraveled, dissembling into a slow groove. Now the sequence in the film reversed with the number of juggled items decreasing along with the number of musical gestures. This simple formula – worthy of a Tom Johnson – was an inspired choice and the playing by Aron Kallay on piano, Shalini Vijayan on violin and Yuri Inoo on MalletKAT was clean and well-coordinated with the film clips. Jugg(ular)ling was an effective musical realization of the absurdities that fill our too-busy lives as the knowing laughs from the audience made clear.

Swallow (2012) by Scott Cazan followed and this was an experimental piece that combined stringed instruments – violins, violas and a cello – with electronic processing. The string players simply drew their bows across the strings; there was no attempt at melody or any kind of chord. These sounds were processed by a computer operated by the composer and played out through speakers so as to introduce feedback into the aggregate. The sounds coming from the strings were, in a sense, the raw material for the processing with the feedback producing the final result. This required careful and close listening and at times the feeling was that of observing a very subtle and ephemeral phenomena – something like an acoustic version of the northern lights on a far horizon. The process seemed a bit hit and miss at times, depending as it does on the acoustical environment pertaining at the instant of performance. But at its best there is an organic feel and the interplay of the tones, while transient, is often beautiful and invitingly mysterious. At times some zero-beating in the feedback gives a bit of rhythm and forward motion, but the feedback process tends to be on the quiet side and is often intermittent. Perhaps Swallow would be better realized in the recording studio where the more effective manifestations of the process can be captured as they occur.

The final piece of the concert was Pacific Light and Water/Wu Xing-Cycle of Destruction (2005) and this was a collaboration between Barry Schrader who composed and realized the piece electronically, and Ishmael Wadada Leo Smith who played trumpet live during the performance. The trumpet is played as an overlay to the recorded electronics and this allows Mr. Smith to react and respond to the sounds as the piece progresses. From the program notes “The Pacific Light and Water portion of the work is inspired by the penetration of light at different depths of the Pacific Ocean. Building on the water theme, Wu Xing embodies the Chinese concept of the Five Elements, among which are fire and water.” The trumpet player follows a graphical score of the electronic piece and this guides the improvisational component of the playing. The water theme came through very strongly in the recorded electronics and Mr. Smith responded to this with a variety of interesting trumpet calls, trills and sustained tones. The trumpet provides a familiar handhold for this music and made a good contrast to the thunder, rain and watery sounds coming from the speakers. The liquid feel increases and towards the end of the piece a booming surf is heard that increases in volume as the trumpet struggles against it. The surf sounds escalate into sharp canon reports and the piece concludes dramatically with only the trumpet playing. The overlay form of Pacific Light and Water/Wu Xing-Cycle of Destruction is a good example of a collaboration that is completely independent yet intimately linked through the solo performer, and this was nicely accomplished by Ishmael Wadada Leo Smith.

This concert was a good survey of the electroacoustic forms and techniques that are being explored by contemporary Los Angeles composers. HEAR NOW is in its fourth year and judging by the music presented in this concert the future looks very bright.