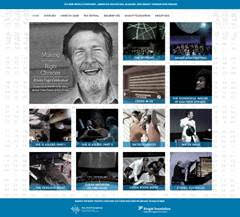 The New World Symphony, America’s Orchestral Academy (NWS),  has launched a free, online resource called  Making the Right Choices: A John Cage Celebration, dedicated to the works of one of the 20th century’s most influential, innovative and provocative composers . Content for the website derives from New World Symphony’s three-day program Making the Right Choices: A John Cage Centennial Celebration (February 8-10, 2013), the most ambitious and comprehensive commemoration of the artist’s legacy mounted during the hundredth anniversary of his birth. The site, funded by the John S. and James L. Knight Foundation, represents works from throughout Cage’s career, with performance videos of some of the composer’s best-known pieces as well as works that have never before been presented or documented in this way.

At the core of the online archive are videos of 12 performances and behind-the-scenes discussions of Cage’s work by Michael Tilson Thomas; Fellows of the New World Symphony; world-renowned artists including new-music vocalist Joan La Barbara, pianist Marc-André Hamelin, soprano Jessye Norman; and dancers from the New World School for the Arts in choreography by Merce Cunningham. The performances drew on the extraordinary possibilities for staging and visual enhancement made possible by the New World Symphony’s campus–the New World performances extend that process, going beyond simple documentation to become creative realizations of Cage’s work. More than 25 behind-the-scenes vignettes of rehearsals and preparations for the performances take the viewer into the process of “making the right choices,” providing musicians, educators and audiences around the world with rare access to insights and conversations between NWS’ Founder and Artistic Director Michael Tilson Thomas, NWS Fellows, guest artists, and John Cage experts as they approached the delicate and nuanced task of preparing Cage’s works.

“The New World Symphony’s John Cage festival was an opportunity to stretch our imaginations to the fullest,” said Michael Tilson Thomas. “Over the course of the week we came to appreciate the amazing range of his music. The diversity of his music inspired us to use all the capabilities of our ensemble and of our building to present his works in installations designed for them. The videos on the website are, in some cases, reportage of those installations. In other cases they are new video works based on the experiences of the live performances. The process of performing and interpreting his works has been a transformative experience for all of us who were involved.”

The extraordinary richness of the videos on the site is made possible by the comprehensive documentation of the works during the festival by the New World Symphony’s audio and video team. The festival and the website was funded in part by the John S. and James L. Knight Foundation, ensuring that the works of John Cage would be documented and made available for future generations to learn about and appreciate his contributions to the fields of music, dance and artistic thought. Documentation of the event included multiple camera and audio crews who recorded hundreds of hours of video over a two-week period, documenting every aspect of the preparation and presentation of Making the Right Choices.

Highlights of the archive include the video realization of The Seasons (1947), Dance / 4 Orchestras (1982), in which images of Cage’s drawings and compositions are layered upon the views of the musicians in performance; Cheap Imitation (1969), performed with a portion of the original and rarely seen Merce Cunningham choreography, titled “Second Hand”; and She is Asleep, Part 1 (1943), which includes images that appear to be seen from within the instruments being played. Over the next year, additional videos, interviews and materials will be added to the site.

The website is New World Symphony’s most recent accomplishment in online music education. NWS is a leader in the experimentation and development of music applications for Internet2, a high-speed, next-generation Internet, connecting more than 200 U.S. universities as well as international universities and governments. To date, NWS has connected with more than 150 institutions in over 20 countries, in order for its Fellows to receive instruction from professionals around the world, and for its Fellows to share their own knowledge with young musicians as well, providing access to classical music instruction and mentorship that they may not otherwise have access to.