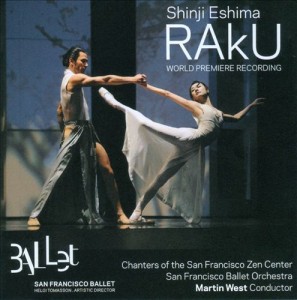 Meeting someone out of cyberspace can be fun. And so it was after a flurry of e- mails that San Francisco Opera and San Francisco Ballet double bassist and composer Shinji Eshima and I met on a brisk April Sunday just before his 2pm curtain for its Balanchine Masterworks Program, to talk about his SFB commission RAkU which the company
tours to Hamburg–26-27 June, and to London’s Sadler’s Wells–19,20,23 Sept–and to DC’s Kennedy Center 13-18 December.

Eshima is immediately cordial (“You’re on time “) and leads us through the underground maze of The War Memorial Opera House until we arrive backstage where several dancers are warming up, and sees principal Damian Smith ( “You’re looking good”) who isn’t. And then we decamp to the lounge to talk about his Japan-set score for Yuri Possokhov’s RAkU, which the company debuted in February 2011 to immediate acclaim, and which I caught–the audience was spellbound–when it was revived this winter. The composer, who’s dressed in a black suit and snappy tie, speaks in a quiet, even tone about his work on RAkU.

“It’s based on the story of the monk who burned down The Temple of The Golden Pavilion in Kyoto which is the most famous temple in Japan,” and Eshima is quick to point out his Buddhist background. “My grandmother was the first ordained woman minister in America and my family was very involved in the Buddhist temple in Berkeley” The Buddhist concept of attachment, or in Eshima’s case the burning obsession of desire, drives his score, and the San Francisco Zen Center monks in the pit chant “We’re here to listen to your suffering” to the same 3-note cell–Eshima translates it as “I love here”–which expresses the desire of the monk–Pascal Molat–for the princess–Yuan Yuan Tan–who’s in love with the samurai prince–Daniel Deivson. Eshima and Iwonder if it’s possible to break free of desire and hence suffering, but musical matters are more pressing, and the composer, as I’d requested via e-mail, brings the score.

“I wanted to use the harp here, “he says, pointing to the opening bars of the “Prelude”, where it functions as both rhythm and color before darker hues are added by double basses and English horn. The sound is bare and heartbreakingly direct–the ” I love her ” cell–and any composer who goes out this far at the very beginning risks not being able to keep his audience with him for the duration. But Eshima’s instincts are right on the money, and honed no doubt by his long service in the opera pit where he’s absorbed how masters like Verdi do it. And Eshima’s sense of musical space is impeccable. “You want to give space to the performers,” he says, meaning of course the musicians, but any music theatre work has to factor in the performer on stage and off, and Eshima’s ” Warrior ” honors both with its dense bacchanal like dance in 7/8, with dramatically percussive writing not just for percussion–conch shell, non-pitched drums, timpan , bass drum, wood block, marimba, harp, piano–but also in the winds–flutes, clarinets–and brass–bass trombones. And Eshima keeps its steady met. 135 pulse interesting by spelling a 14 beat count as 4+4+4+2, and 2+2+2+2+2+2+2. Eshima’s intimate use of space is equally striking in “Kimono”–with is oboe arabesque over a string drone which suggests the piercing mixed winds in gagaku ( itals )–Japanese court music as Yuan Yuan Tan’s kimono, in a true coup de theatre, slips off her and disappears above the stage.

Eshima leads us back to the musician’s locker room to his locker plastered with photos, and takes out his Charles Plumerel 1843 double bass which figures famously in Degas’ painting The Orchestra of the Opera. He runs his finger reverently over its pen under enamel inscription, And then he plays the opening and reiterated for four minutes Eb with which Wagner began his RHEINGOLD prelude, and the connections between his RAkU “Prelude” and Wagner, are obvious. We are going into another world, and this is the key to the door.