‘Man on a Wire’ in Pasadena 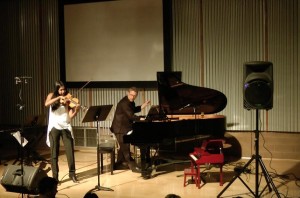 The first piece was Four Roses (1997) by Annie Gosfield and this was written for cello and de-tuned keyboard. Aron Kallay played the electronic keyboard and Maggie Parkins, cello. According to the program notes “Three of the cello strings are tuned conventionally, and the ‘A’ string is tuned 80 cents flat (just short of a semitone). This scordatura creates microtonal intervals between the open ‘A’ string and the normally tuned strings. The keyboards use prepared piano and piano samples, tuned to a scale that is 32 notes per octave.” This opened with stark, scratchy sounds from the cello that soon coalesced into a pleasing pizzicato groove while the keyboard added short, metallic notes that provided a good contrast. This order was then reversed, with long, sustained tones coming from the cello while the keyboard fashioned a melody from riffs of 8th notes that worked nicely against the smooth background. The cello then embarked on a slow, dreamy solo and when the keyboard entered again there was an added sense of tension that persisted through a brief revisiting of the opening theme. A sudden ending concluded the piece. Four Roses ably incorporates unconventional tuning into an engagingly listenable piece that was artfully performed.

Get Rich Quick (2009) by Ian Dicke followed. This piece is for piano and fixed media and was performed during the May, 2014 People Inside Electronics concert in Santa Monica. A new video by Katherine Guillen was commissioned for this latest performance. Get Rich Quick was written shortly after the 2008 market crash and is a playful look at the fragility of our financial system. It begins with sounds of the frenetic bidding of a trading floor and the ringing sound of a coin spinning. A loud, scary piano crash follows, and a chilling melody is heard while a shower of falling coins is seen in the video. The dark melody builds in volume and tension as fragments from 1960’s-era commercials are seen extolling the virtues of consumer debt and stock market speculation. Phrases like “Debt is part of American life!” and “Investing is easy!” are heard while visions of conspicuous consumption are seen. Images of charts and currency tables are especially vivid in parts of this new video, hosted by the BitQT App, with movement and bright colors that dazzle the eye. The music becomes increasingly ominous as the video narration turns suddenly righteous – “Pay those bills!”, “There’s no free lunch!”, and finally “Get out of Debt.” The video concludes with more falling coins and a music box melody of Teddy Bear’s Picnic. Get Rich Quick has lost none of its relevance and the playing of Aron Kallay perfectly fit both the video and the musical message.

The next piece was The Alchemy of Everyday Things (2015) by Jason Heath and this was for piano, violin and live electronics. Originally written specifically for the Villa Aurora performance space with five channels of audio, this Boston Court version was realized in stereo. Aron Kallay was at the piano and Shalini Vijayan played violin. The piece began with a lovely sustained tone from the amplified violin that was unusually deep and rich. The piano entered, but in an unexpected way. Aron Kallay was seen to be drawing a length of fishing line – or perhaps some thin wire – across one of the lower piano strings. The sound this produced was both exotic and profound, like some ancient Asian stringed instrument. When combined with the violin, the result was calm, soothing and meditative – a wash of warm tones without need of rhythm. A high, soaring violin line added a brightness and color and this was joined by several piano notes, struck now from the keyboard, breaking the spell. The violin became more active and piano chords added a new energy and movement to this middle section. At length the sounds of water lapping at a lake shore and a soft whispering were heard, adding an element of mystery. The violin played a soft solo of low, sustained tones and soon the piano joined with more notes bowed with the wire line, returning to the serenity of the opening. The Alchemy of Everyday Things is a beautifully transcendent piece that draws a surprising elegance from very simple sounds. The playing in this performance was equal to the task, delivering a delicate, introspective quality that precisely matched the music. 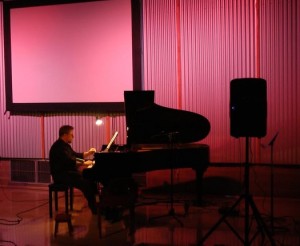 Bloodmoon October (2014) by Kate Moore, for piano and live electronics, followed and this began with a frenetic series of rapid chords that filled the room with a dense combination of power and tension. Crescendos and decrescendos gave the music a wave-like feel, surging and receding with relentless energy. The piece was originally written for Aron Kallay and the program notes state that “The title of the piece refers to the lunar eclipse ‘Blood Moon’ that took place in October 2014, the period in which it was written. This otherworldly moon, observed during the month of October , could be seen from both California and New South Wales, creating a link between the Australian composer and American performer.”

Bloodmoon October is a technically demanding piece and was played in this performance with great skill. The frenetic tempo never lets up and great sheets of notes flow by in a fast torrent, yet the feelings conveyed in the music turned gentle, introspective, powerful or anxious by remarkably subtle changes in the harmony. Bloodmoon October is an exciting piece that impresses with its energy and power, but also imparts an understated grace.

After a short intermission, the world premiere of In the Shadow of the Hour Hand (2015) by Colin Horrocks was heard and this was scored for piano, fixed media and live electronics. This began with single notes from the piano that were picked up and reprocessed in a way that added unexpected power to the overall sound. The strong, dramatic feel included a slightly alien tinge as the processed tones hovered, then dissipated into the air. There was a sense of remoteness – and at times a mournfulness – that lingered as the powerful chords issuing from the piano and were recast electronically. The lower tones from the piano were especially rich and contrasted nicely with higher answering notes in the middle stretches. The electronic processing continued adding power to power, and at times it seemed as if you were standing directly inside the piano. The interplay between the familiar sound of the piano and the exotic electronic output created a sort of emotional disconnect that served the composer’s intention to survey “an infinitude of … spaces left unseen…” In the Shadow of the Hour Hand is a dramatically powerful piece, with the live electronics working as an equal partner to the acoustic piano. 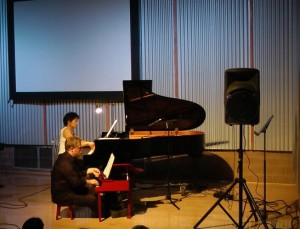 Airdancing (2013) by Tom Flaherty followed and this was a much lighter piece, scored for toy piano, piano and electronics. Genevieve Feiwen Lee sat at the grand piano while Aron Kallay squeezed himself on to the small, low bench of a bright red toy piano. Deep chords from the piano began Airdancing and these were soon joined by the lighter timbre of the toy piano floating above. There was a sense of mystery, accentuated by the electronics, that enhanced the power to the bottom end. The tempo slowed and the feeling turned ominous, like a lurking beast waiting to spring. The pace quickened and there was a wonderful stretch where the toy piano and grand piano exchanged lively syncopated passages. The electronics fell silent and there was a great rush of notes from the pianos, skillfully executed by both performers. The electronics returned with deep, booming tones and as the piece roared towards the finish line it felt like the rousing finale of a piano concerto. Airdancing is stimulating, expressive music and the close ensemble playing of Aron Kallay and Genevieve Feiwen Lee in this performance was remarkable.

Man on a Wire (2010) by Isaac Schankler followed and this piece was scored for piano and live electronics. Aron Kallay was seen strapping a Nintendo Wii controller to his right forearm and the accelerometer signals transmitted from this device as he played were used to guide the electronic processing of the live piano sounds. Isaac Schankler explains in the program notes: “Man on a Wire is an acrobatic act demanding tremendous agility and precision from the pianist, involving massive leaps, tricky hand-crossings, and sudden shifts in character. … A performer at rest will pass through a ‘clean’ piano sound, while greater movement will create greater and greater disturbances… ”

Man on a Wire began quietly enough – a few single notes with the electronics bending the pitches slightly. As the piece gathered momentum the notes came in flurries and then as a great swirling flood of sound. The electronics seemed to be doubling the number of notes, creating a marvelously complex texture that filled the room. The playing was indeed acrobatic, requiring a disciplined technique, but the overall effect was one of smooth control. There were quiet stretches with some lovely harmonies and a nicely serene sensibility. As the piece concluded, the tempo slowed markedly, becoming more profound and introspective. Man on a Wire is an intriguing combination of spectacular playing, a novel feedback mechanism and live electronic processing that engulfs the listener with new levels of density and complexity, but also reaches into those quieter and more reflective emotional spaces.

The final piece on the program was Paths of the Wind (2010) by Bill Alves. This is a microtonal piece based on interlocking pathways of the numbers two, three and seven. Aron Kallay used a keyboard and software that realized the composer’s tuning electronically. Paths of the Wind began with a deep roll of lower notes invoking an sense of expectation, as if something important were about to happen. The tones, although unconventional, were generally engaging and had an organic feel – especially in the lower registers where the power of the sound brought to mind wind, waves and other such forces of nature. As the playing moved into the middle portions of the keyboard, the higher pitches added an expansive feeling of grandeur. The title of this piece was inspired by a Hindu text that refers to winds as a universal mystical presence – passing over bamboo, vocal chords and ultimately, ascending to the heavens. As the notes moved into the higher registers towards the end of this piece, the feeling became more gentle and meditative – like listening to a brook or a small stream. Paths of the Wind is a masterful application of microtonal scales, constructing a natural sound world that perfectly captures its airy subject.

Man on a Wire was the final concert of the season for People Inside Electronics and marked another milepost in the continuing evolution of electronics combined with performance in the Los Angeles new music scene. Aron Kallay displayed remarkable versatility and technique in each of these challenging pieces, and the audience received each work with an enthusiasm that attested to the high quality of the music and its realization.

Photos courtesy of People Inside Electronics (used with permission).