People Inside Electronics in Pasadena 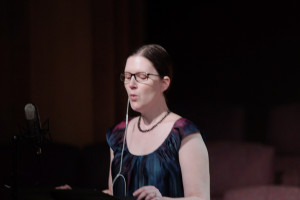 On Saturday, November 21, 2015 People Inside Electronics presented the contemporary vocal chamber ensemble Accordant Commons in a concert at the Neighborhood Church in Pasadena. A Saturday night crowd of new music enthusiasts gathered to hear an evening of vocal music combined with electronics.

The first piece presented, “those remaining words in nuance”, by Chen-Hui Jen featured soprano Stephanie Aston who began with a soft sustained pitch, accompanied by electronics fed through speakers on the stage. More pure tones and vocalizing followed and this gave a vivid sense of multiple voices – Ms. Aston sang along in harmony and this was quite effective. “those remaining words in nuance” is based on two fragments of text in two different languages -Mandarin Chinese and English – with deconstructed phenomes from each used as vocalise materials The electronic sounds were derived from voice and synthesis of voices.

As the piece progressed, the electronics produced cooler, remote-sounding tones and the blending with the solo voice added a familiar human element. That the overall feeling was one of a curious strangeness, but free of anxiety. Ms. Aston skillfully found her pitches quite accurately and sang with careful attention to the often wide dynamic changes. Towards the end the electronics emitted a series of chirps and whistles that could have been whales calling and this produced a warm, natural feeling that drifted off to a whisper at the finish. The sense of ensemble in “those remaining words in nuance” is most impressive and provides a new benchmark in the artful combination of electronics and the human voice. 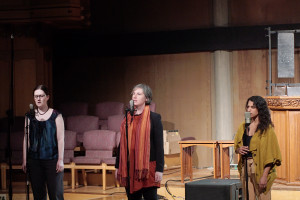 Improvisation was next and this featured the three voices of Accordant Commons: Stephanie Aston, Odeya Nini and Argenta Walther. This began with whistling and breathy sounds and was answered with low moans from the electronics. As the piece progressed soft, sustained tones from the singers mixed with tweets and calls in the electronics, building in volume. A series of falling pitches followed that morphed into thunder and a sharp shriek into the microphone faded into a low roar. There was an exotic and isolated feel to this, as if we were hearing the sounds of some foreign fauna in a remote canyon or valley. By the finish, more breathy sounds and low sighs drifted off into a thunderous background while squeaks and squeals added to the echoing ambiance. Improvisation takes us on a journey to a unique, primal landscape crafted from voice and sound. 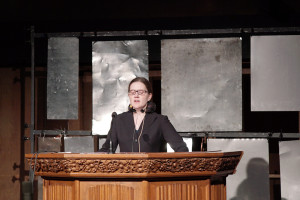 Position, influence by David Coll followed and this was scored for voice and sound sculpture. The voice was supplied by soprano Stephanie Aston and the sound sculpture consisted of an imposing assembly of rectangular aluminum plates hung from a frame and actuated by speaker drivers mounted behind. Ms. Aston ascended the pulpit with headphones and began with a few phrases spoken in French. A series of loud metallic screeching sounds ensued, accompanied by a sharp series of yelps. The aforementioned sound sculpture unleashed a great metallic clatter, supplemented by a low roar and the wail of gnashing gears. The sense was one of great anxiety and anguish, an almost tortured feeling. More fragments of French from the pulpit triggered another round of frightful agony from the electronics as Ms. Aston added some high decibel screams to the mix. The sound level increased and the sheet metal plates in the sound sculpture rattled and shimmered like cymbals, but with a more somber color. After a final crescendo, the stage went black and the piece suddenly halted into a stunned silence. Position, influence is a powerful amalgam of voice, electronics and mechanical sculpture that evokes potent images and strong feelings. 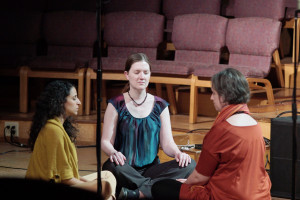 Lullaby for Daisy Pauline by Pauline Oliveros was next and proved to be a peaceful interlude after the energetic drama of the previous piece. All three voices of Accordant Commons were seated on the stage in front of the microphones, but mostly out of sight. A series of bird calls could be heard from the speakers, perhaps a recording of an early morning along a lakeshore. Soft, sustained tones came from the voices and this created a peaceful serenity and a familiar, organic feel. No words were sung and the sounds of nature mixing with the quiet voices created a welcoming, tranquil space. Lullaby for Daisy Pauline was a nicely programmed stretch of placidity in a mostly intense program.

Divergence by Michael Edwards Edgerton followed and this was performed by Stephanie Aston and Argenta Walther. High, bird-like sounds mingled with a low rumbling from the electronics and this soon took on a more frighteningly aggressive character reminiscent of the distant howling of wolves. This increased in savagery as well as loudness, with scratching and baying that gradually morphed into a series of pure pitches that increased in frequency – like a spaceship taking off. These were the result of a weather simulation applied to electronic sounds, a process that allows, according to the program notes, “miniscule irregularities in the initial conditions [to] become responsible for potentially large changes over time.” Low, raspy moaning was added and this made a nice organic contrast with the sterile sine waves. Towards the end, the relatively benign tones in the electronics became a series of explosions, as if some battle was occurring. Divergence is an evocative metamorphosis in sound between earthly, natural elements and remote cerebral coolness.

The audience was asked to exit the theater for a short intermission so that the space could be prepared for the final piece, the world premiere of Where I Am, I Am, by Odeya Nini. As everyone filed back inside, a number of small flashing lights – as might be found on a Christmas tree – were scattered among the empty seats. Field recordings, taken at various places from around the world, were heard through the speakers on stage. In the full darkness the blinking colors added a mystical dimension to the proceedings which began with the three voices of Accordant Commons singing along with some industrial strength scraping and clapping that emanated from the speakers. Breathy sounds from the voices along with the blinking lights added to the primitive atmosphere. Accordant Commons then dispersed among the aisles of the audience, singing through small megaphones with single tones ringing out against the electronics.

The singers regrouped while pure sine tones were heard from the speakers and this inspired a yell in reply, matching the electronic pitches. This continued, evolving into a more harmonious blend, the cool, electronic tones mixing with the primal sound of the voices. A bit of an African communal song was heard in the speakers and the singers began repeating a series of low, solemn tones. There was a sudden sense of the recapitulation of the entire history of music – from primal yell to tribal song to a spiritually driven consonance – all inspired by the pure tone. The piece concluded with the singers chanting in reflective harmony, processing down the center aisle and out into the night, leaving the audience in silence with only the lights blinking in the darkness. Where I Am, I Am is a compelling narrative of the primordial need for human expression through sound.

This concert by vocalists Accordant Commons and People Inside Electronics furthered the bond between live performance and electronics, giving a real sense of partnership between ancient and contemporary musical methods of expression.