On February 16, 2016, Tuesdays@Monk Space hosted a concert of Cold Blue Music artists in the lively Koreatown district of Los Angeles. A good crowd came out to hear music by Michael Jon Fink, Jim Fox, Michael Byron and Peter Garland. Three premieres were heard including the world premiere performance of In the Village of Hope by Michael Byron.

The first piece, Vocalise (1979), by Michael Jon Fink, was for piano and performed by the composer. This opened with series of quietly beautiful notes, like the melody from a simple hymn and unfolded with the spare elegance that is the hallmark of Michael Jon Fink’s compositions. The warm acoustics of the cozy Monk Space – with brick walls on three sides – allowed for an extra long duration and decay of the sustained notes, adding to the sense of serenity. Vocalise is not a long piece, but contains all the essential elements of peaceful sensibility that informs this composer’s music.

From a Folio (2013), also by Michael Jon Fink followed, and for this piece of seven movements cellist Derek Stein joined the composer, again on piano. Each of the movements are compact and variously declarative, quietly powerful, unsettling, questioning, solemn or even sorrowful. Sustained cello passages were often set up by a series of simple piano notes or chords, a contrast that proved to be very effective. At other times a soft call and answer pattern between the cello and piano prevailed. The subtle touch on the piano was complimented by the sensitive playing of Derek Stein who discerned the quiet intentions of this work perfectly. The graceful consistency of these seven movements give From a Folio a notable sense of tranquility combined with a satisfying cohesiveness. 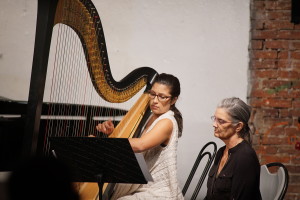 The world premiere of In the Village of Hope (2013), by Michael Byron was next, performed by harpist Tasha Smith Godínez, who commissioned the work. This is an ambitious piece, full of constant motion but with an engaging and exotic character. It has a soft, Asian feel and the steady patter of notes fall like raindrops in a warm tropical shower. A light melody in the upper registers is joined in masterful counterpoint below, and the piece glides delicately through several key changes as it continuously unfolds. Listening to the Cold Blue recording of this piece one imagines that the harpist would be a great flurry of motion – but the technique of Tasha Smith Godínez in this performance was superb; her graceful fingers never seemed hurried or her movements labored. The tones from her harp were clear and strong; the lively acoustics of Monk Space made them almost seem amplified. A drier acoustic environment might have served to bring out the intricate texture more clearly. Michael Byron, who was in attendance, admitted to a certain trepidation when he turned in the imposing score, but Ms.Godínez never asked for any changes or modifications and proved more than equal to the task in this performance. In the Village of Hope is a profoundly impressive work, in both its vision and realization.

After the intermission, the West Coast premiere of The Pleasure of Being Lost (2012), by Jim Fox was performed by pianist, Richard Valitutto, who stepped in at the last minute for an ailing Aron Kallay who was originally scheduled to appear. This began with a quiet recording of whispering by a female voice attended by distant, windswept sounds – all from two speakers placed on the stage. The piano joined in with a series of measured passages that added to the mysterious feeling. As the soft spoken text continued, simple piano phrases were heard, sometimes questioning, sometimes anxious and sometimes reassuring. The piano seemed to be commenting on the spoken words. The playing here by Valitutto supplied just the right touch, as the feelings oscillated between the perplexity of being lost and a warm wash of reassurance at the finish. The Pleasure of Being Lost artfully combines the seemingly contradictory emotions arising from remote separation and welcoming comfort.

The final work on the program was the US premiere of Where Beautiful Feathers Abound (1992), by Peter Garland. For this piece Richard Valitutto was joined by most of the Lyris Quartet; violinist Shalini Vijayan, violist Luke Maurer and Timothy Loo on cello. This music was written during the composers travels in Mexico and the title is a rough translation of Cuetzalan, the name of a small town in the mountains of Puebla. Each of the three movements are dedicated to the people the composer met on his journey, honoring their generosity and hospitality. The first movement, Nuestro Señor de las Maravillas / Son de San Andres, opens with a lively, syncopated flurry of piano phrases joined by pizzicato strings on the back beat, generating a cheerful rhythmic groove reminiscent of a rural Mexican street scene. There was an interlude of smoother passages featuring lush and even majestic harmonies with a warm and welcoming feel, before the movement concluded by bouncing back to the dance-like groove of the opening. Carmelita: A Song About Love followed and this had a slower, more introspective feel in the piano complimented by occasional sustained chords in the strings. The piano propels this movement forward with wide, sweeping gestures and some very beautiful harmony. The playing by Valitutto was especially effective, his fine touch perfectly extracting all the expressive nuances as this movement ended with a quietly warm tutti chord.

The third movement, Sones del Rio Papaloapan, returns to the snappy uptempo feel of the opening. This last section is based on an experience Garland had while staying in the town of Tlacotalpan, Veracruz . As he describes in the program notes: “One evening I was sitting with friends drinking beer outside a bar. A man approached, playing a miniature jarana (a strummed guitar-like instrument) … It was simple music, only three or four chords rapidly and rhythmically strummed with the man singing… I was mesmerized and jumped up from my seat exclaiming ‘What is that?!’ It sounded so much like the first movement of this piece!” The strings begin in a rapid, syncopated pizzicato but soon produce some nice harmonies against a more rhythmic piano line. The bouncing passages in the piano continue as the underlying tutti strings support with arco smoothness before returning to the pizzicato rhythms as the piece concludes. Where Beautiful Feathers Abound is the heartfelt portrait of an extended journey by a stranger to an exotic locale, who returns full of fond remembrances. 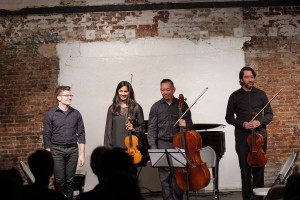