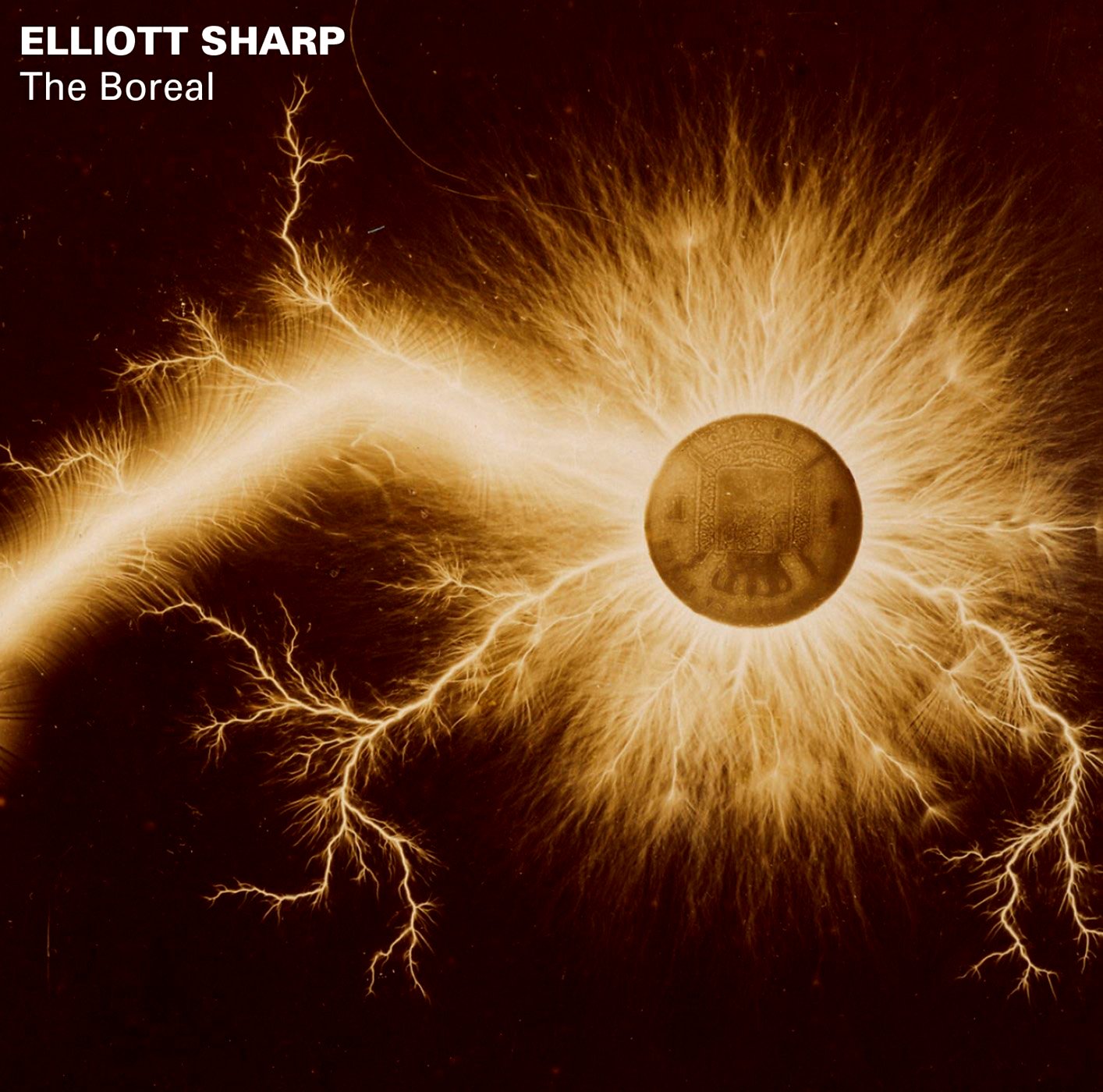 Elliott Sharp may sometimes be characterized as a cellular composer, but he is by no means a cellular thinker. Rather, he seems to conceive of things in large swaths of creation, only then removing skins and reconnecting veins until each organism revives by means of unexpected blood flow. The Boreal collects four somewhat recent examples, of which the 2008 title composition, performed here by the JACK Quartet, employs awesome extended techniques, including bows strung with springs and ball-bearing chains, in addition to standard hair.

But through this recording it’s not so much the craft as the art that shines. Like the electric effluvia on the cover photograph, Sharp’s writing emits an attractive aura all its own, leaping from one motif to the next with ionic inevitability. The new bows reveal inner voices in the second movement, which with its sonic forensics swabs the seat of creation for any residue left by whoever last sat there. Whether plying striated territories in the third movement or touching off cyclical measures in the fourth, the musicians are fully present and work their touch to suit the needs of changing topography. It is a piece that would fit comfortably in the Kronos Quartet’s repertoire, but which feels just as much at home in JACK’s hands. Sounding almost electronic yet with such intimacy as to only be renderable in real time, the quieter passages especially highlight the potential of these extensions.

Fearless musicianship is characteristic of the album as a whole and is embodied to its fullest at the fingers of pianist Jenny Lin, who gives Oligosono (2004) more than it ever dreamed of in an interpreted life. Raw technique again pays dividends, forging rhythmic codes through a tactile relationship with the piano strings. Lin handles these messages as if by her very DNA, harmonic overtones reinforcing one another through mechanisms of repetition. Each section is grafted to the ones before and after it (even the first and last carry unheard continuities). The insistence of certain impulses exists not for the sake of minimalism, but to maximize the potential for incidental utterances and hidden voices within the instrument’s architecture. The whole thing feels like a medical test of space-time itself as the depth-soundings of the third and final movement give chase to biological data, savoring the imprints left behind of an entity they cannot ever catch. Here is the piano as machine, the body as instrument.

Proof Of Erdös, written in 2006 and performed by Sharp’s Orchestra Carbon under the direction of David Bloom, is something of a non-portrait. Despite being inspired by the persona of mathematician Pal Erdös, it doesn’t so much illustrate a life as one of its many panels of expression. Here the bowing, while more familiar, sprouts a forest that is less so. Feelings of tension give way to silence and reset. Sharp’s expanse of internality is overrun with genetic details, a mitochondrial frenzy turned inside out, a tuning of the self to the self until there is no self left to tune.

Janáček Philharmonic Orchestra, conducted by Peter Rundel, gives the final reading of the program, performing On Corlear’s Hook (2007) with commitment. The piece is cinematic in scope—think 2001: A Space Odyssey—but works its cosmic drive inward rather than outward. It inhales dark matter with the appetite of a black hole. The vaster instrumental forces at work enhance this feeling of inwardness. Every new shift of texture and color is a veritable terabyte of information compressed into a drop of ink on staff paper. It is the nervous system as metropolis, and sensations as traffic running through its streets. Harp, strings, and brass work together toward a unity that feeds on self-fragmentation. Epic, to be sure, but only the beginning of life.

These pieces are translations: of inside to outside, of colors to emptiness, of stillness to vibration and back again. In them are whispers of screams and vice versa. Together, they are a mirror, cloudy but usable, waiting for the polish of an open ear. Like the void within that ear, Sharp’s is a sonic universe devoid of politics, an environment where one can simply listen, be, and listen to being.