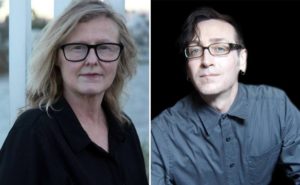 On February 21, 2017, Tuesdays@MonkSpace was host to Nicholas Chase and Robin Lorentz, in Los Angeles to perform Bhajan, their latest CD from the Cold Blue recording label. Ms. Lorentz played the electric violin and Chase was at the controls of the computer and various audio interfaces. This occasion marked the premiere performance of Bhajan. Both were barefoot and clad completely in white, a refreshing departure from the solid black so often seen at new music concerts.

Bhajan consists of four roughly equal sections totaling some 47 minutes and is based on Hindu devotional music. For this performance all four sections were played continuously and the violin score extended over four music stands.  The first section is Bindu and this begins with a soft oscillating sound from the electronics followed by a few seconds of silence. More beeps and clicks accompanied by a high, repeating Eb violin pattern that anchors the listener against the otherworldly feel in the electronics. The electronics here are performed by Nicholas Chase on a playable interface programmed for the various sounds, but also responsive to the touch. The score is loosely organized to allow the violin to lead, and the coordination between the two players resulted in an unexpectedly tight ensemble. The violin played sustained tones against an electronic counter melody and this allowed some intriguing harmonies to develop as the final moments of Bindu took on a more serene feeling.

Drshti, the second section, has a more reverential feel with a deep drone coming from the electronics and a growling from the violin that approximates the patterns of a chant. There is an air of mystery in this and the interplay between the violin and the electronics borders on  conversational. The third section, Japa, has an almost conventional melody line in the violin. At one point the electronics are initiated by a series of buttons that trigger the sounds accompanying the violin, but the ensemble remained as tight as ever. The remarkable playing of Ms. Lorentz brought even the prerecorded sounds into a full partnership with the violin melody.

This expressive playing culminates in Bhajan, the final section. A quiet electronic drone sounds in the upper registers while the contemplative violin is heard below, and a warm, settled feeling pervades throughout. The electronics are again played by Nicholas Chase, and there is a subtle reprocessing of the violin in real-time that adds to the warm texture. It is the extraordinary playing of Robin Lorentz, however, that lifts this section to sublime sensitivity. The violin leads with extended phrases and the feeling is like drifting quietly away on a flowing stream. Nowhere is there the flash of complex technique, but the virtuosity of touch is unmistakable and transfixing – this section could go on for an hour and not be boring. Eventually the lovely playing fades away, and leaves the audience in a respectful silence.

Bhajan is an exquisite example of just how far skillful playing and computer-based electronics have become integrated. The high level of communication and ensemble in this performance was impressive, with each player contributing to the overall mood of the piece. Ms. Lorentz has an impressive resume and obviously understands all types of music, but none will exceed Bhajan for masterful interpretation.

Bhajan is available on CD directly from Cold Blue Music as well as at Amazon and iTunes.