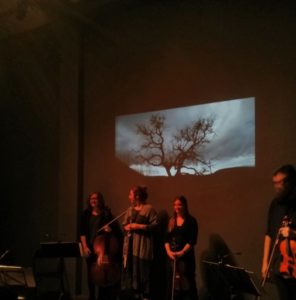 On Saturday, January 28, 2017 the Southland Ensemble convened in the China Town district of Los Angeles to present a concert of the works of poet Jackson Mac Low. Every seat was occupied in the cozy Automata venue at Chung King Court, while outside Lunar New Year revelers filled the night air with the sounds of firecrackers and cheery celebration. Five works by Jackson Mac Low were presented, exploring the interface between poetry and music as directed by random chance.

The first work, Tree Movie (1961), was simplicity itself, as the program notes explained: “Select a tree. Set up and focus a movie camera so that the tree fills most of the picture. Turn on the camera and leave it on without moving it for any number of hours…” Accordingly, the image of what looked to be a scrub oak tree was projected on the wall overhead for the duration of the concert, lending an iconic continuity to the proceedings. The room was otherwise immersed in complete darkness and this focused visual attention to the image, promoting a more acute listening experience.

Young Turtle Asymmetries (1967) was the first work performed, and this was a complex amalgam of spoken words and phrases combined with musical tones. Asymmetries are defined by Jackson Mac Low in the program notes as “…nonstanzaic poems of which the printed formats are notations for solo or group performance. They are ‘asymmetrical’ in that they have no regularly repeating stanzaic or other patterns. They are ‘notations’ in that most aspects of their format can be translated into performance. Notably, the lengths of the blank spaces before, between, & after single words or words strings, & between lines, stand for ‘temporal holes’ – durations in which readers keep silent or produce single, prolonged tones.”

Accordingly, Young Turtle Asymmetries started with sporadic spoken words accompanied by sustained tones from the various instruments scattered among the performers. Dice were dropped into small wooden bowls at intervals to provide the element of chance in the direction and reading of the score. The words and phrases comprised a fragmentary account of the hatching of baby sea turtles on the beach, and their return to the sea. Just enough of this was intelligible to gain a sense of the story, which served as a focal point while musical tones and spoken phrases flowed out into the audience. The musical accompaniment was similarly splintered and while this added a welcome coloring to the words, the power of this piece resides in the text. The words enlist the mind to build a mental image – as if piecing together a jigsaw puzzle – of turtles making their mysterious way to unknowable destinations. Young Turtle Asymmetries combines several disparate elements into an engaging experience driven by chance associations.

Is That Wool Hat My Hat? (1980) followed, and this was inspired by an unlikely mix-up of headgear at a New York poetry festival. The rhythm of this phrase forms the basis of this piece, and chance variations in the sequence and number of the words are used to create a series of changing patterns. There are no musical instruments in this and all of the performers begin by speaking the words in unison. Depending on the roll of dice, each performer continues with different sets of words or segments of the phrase. This creates interesting variations in the rhythm and texture of the resultant sound and confronts the listener with the choice of parsing the words into a message or hearing the overall contours of sound. As the variations increase, a sort of counterpoint develops in the speaking cadences, suggesting a musical component to this even in the absence of instrumentation. Is That Wool Hat My Hat? operates at the intersection of words as message and words as the shaping of sound, expanding the listener’s perception in both directions.

54th Light Poem: For Ian Tyson (1978) was next and this piece combined three unusual poetic techniques. The idea of a ‘Light Poem’ is based on a table, devised by Jackson Mac Low, of some 288 different names or terms for light. Names were randomly chosen from this table and selected such that their first letters spell out the name of ‘Ian Tyson.’ ‘Ian Tyson’ is also spelled out in the pattern of the words and letters in the poem as read diagonally, or in other ways, between the stanza lines. Finally there is the score that allows for a number of spontaneous choices by the performers. A single voice began the piece, but soon the others joined, each reciting a line or two of the poem. At times, some would hum or sing a pitch, but there were no musical instruments involved. Fragments of the lines were often repeated and the time and date of the writing was included in the text, providing a sort of deconstructed framework for the listener. There was a great deal of variety in the different patterns and silences, and bit by bit the poem was built up as the listener assembled the fragments into a coherent image. 54th Light Poem: For Ian Tyson is another example of Low actively engaging the listener to organize the patterns and words into an organic whole.

The final work on the program was Numbered Asymmetries (1980), similar in form to the opening piece. This time the performers were rearranged into two groups – male and female – on each side of the space and equipped with instruments. Words and phrases were heard at random with sustained tones in the instruments. The words, the length of the silences and tones were again chosen by the rolling of dice by the performers. The spacing of the two groups gave a dimensional perspective as the voices arrived from opposite directions with different pitches.

The words and phrases were in no particular order and so the listener was continuously engaged in assembling the poem from the fragments being received. The harmonies created when two or more instruments sounded together was quite moving at times, and added an eloquent coloration to the poetry. The phrases occasionally acquired an unexpected intensity – words like “American” and “Nation” seemed to put a charge into the listening atmosphere – especially when accompanied by unusual harmonies from the instruments. No doubt this was inspired by the emotional politics of the present time.

Numbered Asymmetries and the other Jackson Mac Low pieces in this program manifested intriguing new ways to deliver poetry, using silences, word patterns and random chance that actively engage the listener, while at the same time the overall sound forms a separate sonic experience that extends the performance to another level.