NEW YORK – One of the most eagerly anticipated New York premieres of 2017 was Esa-Pekka Salonen’s Cello Concerto, written for Yo-Yo Ma. It had been presented shortly before by the Chicago Symphony, and buzz had grown around the piece based on positive reports from the these concerts. At David Geffen Hall, the New York Philharmonic showed that the Chicagoans hadn’t cornered the market: they had much to offer in this engrossing work. Outgoing Music Director Alan Gilbert made a strong impression with a sensitive and detailed reading of the Salonen concerto. The composer was on hand before the performance to give an image-filled talk from the stage.

Opening in a chromatic environment, with stacks of bitonal chords (C+D# diminished noteworthy among them), hazy string tremolos are set against motoric patterns from winds, muted brass, and pitched percussion. The cello solo at first plays along with the cello section, then in counterpoint with it: a mournful melody that starts out in the cello’s medium upper register and works its way down to the open A string. The orchestra part juxtaposes the modernist palette of the opening with post-minimal repetitive gestures: sostenuto interludes from the strings also take part in the proceedings, giving the impression of the cello solo on steroids. The movement ends with the cello wending its way down from its upper register to the lower half of the cello, ending on the G-string. A low D# from bass clarinet and an icy vertical from the strings accompany it into a void where time seems to stop.

After a blazing brass crescendo, the second movement is often placid, with long stretches of fragility and transparency. A noteworthy feature is the concerto’s first (and primary) use of electronics. Loops are employed to project small sections of the cello part throughout the hall, building an army of ghostly apparitions out of the solo part. While there has been much more extensive incorporation of electronics in various pieces for orchestra, the sound of these loops whirring around Geffen Hall was impressive.

The third movement has been called by Salonen a nod to the musicianship Yo-Yo Ma has garnered with the Silk Road ensemble. To create a multi-cultural effect, and to buoy the dance rhythms that populate the closing movement, Philharmonic percussionist Christopher Lamb was on hand to play a vigorous part on bongos and congas. This isn’t the only duet Ma engages in. He is also given stretches of music to interact with other players, such as the contrabassoon and alto flute in movement two. That said, the pairing of percussion and cello brings out an intensity in the solo part. Cadenzas pile up alongside vigorous tutti, until at the last …

There’s “that high note” that is the penultimate gesture in the work (It is followed by electronics – loops from the second movement that burst into activity around the hall). It is a Bb7 (the last B-flat at the very top of the piano). In an interview with Alex Ross in the New Yorker, Salonen said that he originally pitched the note an octave lower, but Yo-Yo Ma said he could go even higher: hence, Bb7.

I was curious: how many other works for cello go this high (or higher)? I’ll admit, I crowdfunded the answer. A quick question on Facebook yielded several responses from friends that the cello has indeed been employed this high and even higher (B7 and C8). Cellist and composer Franklin Cox was kind enough to explain to me that even though the notes are past the end of the fingerboard, by squeezing the string against it, one can elicit these stratospheric pitches. Cox has written them, and Joseph Dangerfield cited Curve With Plateaux, a work by Jonathan Harvey ,that goes all the way up to C8. Andrew Rindfleisch shared JACK’s performance of his second string quartet, in which Jay Campbell plays A7, Bb7, and C8. Pianist Gloria Cheng nominated Thomas Adès’ Lieux retrouvés. Several people mentioned Matthias Pintscher and Salvatore Sciarrino (I haven’t tracked the scores down yet to verify this).

My sometimes curmudgeonly friend Andrew Rudin complained that these composers were trying to make the cello into a violin, but what I heard at David Geffen hall was nothing like the altissimo register of a violin. In some ways, it wasn’t about the extreme highness of the sound; apart from the harmony surrounding it, I don’t think it mattered that the pitch was Bb7 or C8; it seemed eminently attainable – and sustainable – by the soloist. What was remarkable was the long ringing quality it made – like a singing sword on steroids. Here’s hoping that someone – preferably our New Yorkers (while Mr. Gilbert remains with them) records this work ASAP. 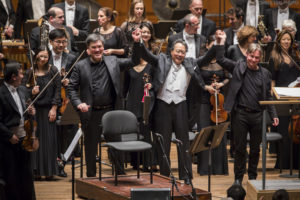