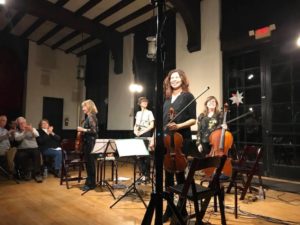 On Saturday, December 16, 2017 People Inside Electronics presented Electric Eclipse, a concert featuring the Eclipse Quartet and a world premiere by Zeena Parkins. Also presented was music by Mari Kimura, Tom Flaherty, Ian Dicke and Missy Mazzoli. There was a special appearance by shakuhachi player Kojiro Umezaki, who presented an original work with the Eclipse Quartet. Every seat was filled in the Throop Church Hall, complete with speakers and what seemed to be several miles of cables.

The program opened with Spirit Away the Flesh (2017), by Zeena Parkins and this was the world premiere. The program notes describe this piece as “ an electro acoustic work using quad speaker diffusion that merges field recordings, vintage synth, and recordings of the Eclipse quartet creating a topography for three artists to reveal their motivations for artistic practice.” The recordings began with the sounds of insects and twittering birds, as captured in various locations along the east coast, from Florida to Long Island. Eclipse supplemented this with a series of soft skittering phrases that soon led to a broadly gentle harmony. Spoken text followed from the speakers; the words of the three visual artists were heard throughout the piece. At certain points the quartet players would strike small metal bowls that sent a pleasant ringing sound out into the audience.

Deep, anxious chords next appeared in the strings, and these became agitated, like so many angry mosquitoes. A feeling of uncertainty and anxiety crept in, contrasting with the more reassuring organic sounds from the field recordings. The playing, the field recordings and the spoken texts were all carefully balanced and blended. The feeling throughout oscillated between tension in the strings and the soothing sounds of the bells and rustic recordings. Spirit Away the Flesh is an engaging work, with many interwoven elements that were nicely coordinated and impeccably performed.

I-Quadrifoglio (2011) by Mari Kimura, followed. This is a four movement piece reflecting on the effects of the 2011 earthquake in Japan and the subsequent meltdown at the Fukushima nuclear power plant. “Quadrifoglio” means four-leaf clover in Italian and the movements of this piece are titled “faith, love, hope, luck.” The program notes state that “I-Quadrifoglio is not only a prayer, but a plea for the international community to keep watch and demand more information; air and water are connected globally and affect all our children’s future.”

I-Quadrifoglio opened with high, thin sounds in the violins followed by sustained tones in a nicely blended tutti harmony. A rolling feel predominated, followed by trills of anxiety and a series of interweaving melody lines. The electronics seemed to quietly echo the playing of the quartet, and this was very effective. The middle movements featured some very lovely passages, expressively played. Contrasting sections of strong pizzicato ricocheted around the quartet and through the electronics. There were extended techniques, rapid phrases and runs that were scattered among the strings, but all were negotiated with just the right amount of liveliness and precision. Towards the end of the piece a dance-like rhythm appeared that morphed into a very complex texture that swirled and surged to the finish. I-Quadrifoglio is a technically challenging piece that draws out many strong emotions while also demonstrating the virtuosity of the Eclipse Quartet.

Recess (2016), by Tom Flaherty, was next. The first movement, “Spin,” began with a strong opening tutti chord and a series of sforzandos that rolled around the quartet, followed by sustained tones that created an anxious feel. The tension continued to build in the rapidly dynamic passages that followed. The tight ensemble of the Eclipse Quartet was nicely balanced with the energy in this piece. For all the innocence of its title, Recess at times stirred memories of early and mid 20th century Soviet era expressionism.

The second movement, “Swing”, while slower and more restrained, continued the sense of tension. A soft echo of the strings could be heard in the speakers, lightly processed by the electronics. A series of descending tones was very effective and lent an almost supernatural air as this movement as it came to a calm finish. The final movement, “Tag” returned to the rapid pace with a frenetic tempo and swirling texture that, like the playground game, seemed unsure as to where it was headed. Exuberant and unrestrained, this is very visceral music and Recess concluded to enthusiastic applause.

(Cycles) what falls must rise (2009) by Kojiro Umezacki followed the intermission. For this piece the composer joined the Eclipse Quartet playing the shakuhachi, a traditional Japanese end-blown flute. Cycles is based loosely on a haiku by Masaoka Shiki:

entangled with
the scattering cherry blossoms
the wings of birds

The piece begins quietly, with soft sounds in the electronics and sustained tones from the shakuhachi. The strings enter, producing a reserved, calming feel as if the sun is rising on a still morning. This spiritual sensibility is enhanced by a dramatic melody in the shakuhachi that weaves in and around the sustained chords in the strings. The lower strings follow, taking up the melody that is eventually passed to the violins, producing a more strident and purposeful feel. A strong tutti sound emerges, providing a fine contrast to the quiet mysticism of the opening section. Powerful trills in the strings and strong notes from the shakuhachi increase the sense of tension and drama – like a squall building in intensity. This eventually subsides – to complete the cycle – dying away at the finish. (Cycles) what falls must rise is an engaging work, grounded in traditional Japanese sensibility, yet equally at ease with the western string quartet and contemporary electronics.

Unmanned (2013) by Ian Dicke, followed, an unsettling piece first heard in a 2016 People Inside Electronics concert. Exploring the use of deadly military force by remote control, Unmaned is a work that brilliantly combines contemporary music and electronics with sharp political commentary. Missy Mazzoli’s iconic Harp and Altar (2009) concluded the concert, a stirring musical portrait of the Brooklyn Bridge and the surrounding waterfront.