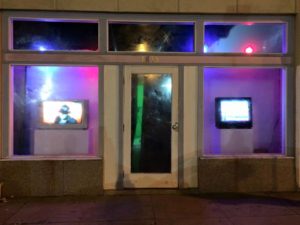 On June 19, 2018, Coaxial Arts was the venue for a program of noise, experimental music and sound. The snug downtown Los Angeles location filled up with a congenial crowd of the knowledgeable and the curious for a concert presented by the wulf titled Open Source: Anderson, Hutson, Shiroishi, Smith. An impressive array of cables, synthesizers, mixing boards, computers and radios was spread over several tables, including a large reel-to-reel tape loop. Casey Anderson, William Hutson, Stephanie Cheng Smith and Patrick Shiroishi were on hand to bring it all to life.

The evening began with Duo by Anderson and Smith, opening with Anderson’s signature use of an amplified transistor radio tuned to a local AM station. Electronic synthesizers joined in with beeps and squeals, projecting an exuberantly spacey feel. Ms. Smith added some scratching and scraping sounds from an amplified violin, inserting some tension. Casey Anderson then contributed a series of long, solemn tones on soprano saxophone and this seemed to bring a measure of stability to the strident electronic sounds that otherwise dominated. More radio stations were heard, contributing a sense of fuzzy normality. The piece seemed to swing back and forth between the swirling whirlpool of electronic sounds and the more familiar sounds of violin, saxophone and AM radio. At the finish, the electronics seemed to prevail by sheer power, even as a long mournful wail was heard from the soprano saxophone. Duo is an apt metaphor for modern life, pulled between the forces of chaos we cannot control and the refuge we gain by retreating into our own humanity.

Quartet followed the intermission, and for this all four players took their places. Ms. Smith continued with her violin and synthesizer, along with Anderson’s soprano sax, electronics and radio. The quartet was rounded out with Patrick Shiroishi playing alto and sopranino saxophones and William Hutson, who presided over a reel-to-reel tape recorder modified to move a large tape loop around two music stands placed several feet apart. Quartet was an expanded variant of Duo and began with the snatches of AM radio and a low humming from the electronics. There was a quietly mysterious sputter coming from the tape loop as well as more beeps and squawks from the synth. The alto and soprano saxes joined in, contributing a sustained warbling that was very effective and added a welcome human dimension to the otherwise exotic collection of electronic sounds.

As the piece proceeded, the saxophones increased their presence with a stimulating free form section that was very effective. The entry of the sopranino, with its very high register, often took on the character of the electronic sounds, especially in short, choppy passages. This made for an intriguingly  hybridized texture as Shiroishi repeatedly drove his saxophone into the pitch domain of the electronics. Quartet surged back and forth and when the electronics dominated, there was a sense of tension and stress. When the saxophones were stronger there was a more welcoming feel, and when the AM radio was played there were the sounds of the banal and the familiar. Quartet wandered freely from one pole to the other, challenging the listener to navigate the line between the anxious and the accustomed.