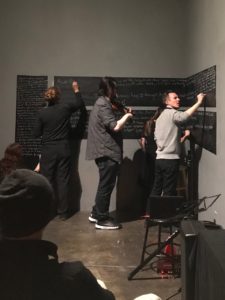 On Saturday, February 9, 2019 the Southland Ensemble presented New Experimental Works at Automata in downtown Los Angeles. This concert was the result of Southland’s inaugural Call for Scores issued last year. With more than 200 responses, seven pieces utilizing graphic and text scores were ultimately chosen for this performance. Automata was completely filled while outside the Chinese New Year celebrations were in full swing with lanterns, firecrackers and enthusiastic crowds.

The concert opened with all are above us (2017), by Nomi Epstein the noted Chicago-based composer and educator. The program notes state that “Her music centers around her interest in sonic fragility where structure arises out of textural subtleties.” This piece opened with several performers sitting in a tight circle. All was silent at first, but breathy sounds, a soft harmonica note and a fragment of a vocal chant eventually drifted out to the audience. The sounds were only musical in the broadest sense and almost always fragmentary. There were often stretches of silence, and it was reminiscent of a quiet conversation around the campfire in some remote setting. The ambient crowd noise outside Automata in Chung King Court occasionally intruded on the “sonic fragility”, but the understated primal feel remained intact. The sparse character of all are above us invites concentration and focus, while artfully enlisting the listener’s imagination to fill in the spaces between the sounds.

Diálogos: Consecuente (2017) by Jorge Delgado Leyva followed, and this featured a group of performers in a semi-circle with a variety of sound sources constructed from found objects. Soft percussive sounds, a bell tone and then some sharp tones from a stringed instrument fashioned from a large paper cup and a length of wire were heard, all more or less continuously, as if in conversation. This continued apace, with new sounds – a short passage on a toy xylophone and the rattling of some dishes – joining the proceedings. It was like hearing some strange process that was not quite musical and not quite mechanical. The tempo and volume increased towards the finish so that a low grade chaos prevailed at the end. Diálogos: Consecuente is an inventive work that creates an engaging sequence of sounds and textures that encourage the listener to supply the context.

Next was Neither /N/Nor/N (2016), by Ben Zucker and for this piece six performers were stationed along the walls and in the corners of Automata. All were equipped with small plastic megaphones, and soon a series of soft breathy sounds and the rushing of air filled the space. This gave a windswept and lonely feel that extended over the entire piece; there were no musical tones or sounds of percussion. Such a delicate piece called for concentration, and at about midway point, the sounds of footfall from above served to activate the imagination of the listeners. This was unplanned – there are apartments above Automata and the occupants were simply walking about – but this added a chilling element to a piece that was otherwise rural and remote in character. Neither /N/Nor/N is simple in both materials and structure, yet it proved to be the perfect canvas upon which sonic illusions could be released by the imagination.

Book of Hours by Nicole DeMaio followed with four performers sitting on the floor in a tight circle. A single player began by clearly reciting a paragraph of text that was an explanation of some complicated element of grammar. As this was repeated, a second player joined in, speaking the same text, but not in unison, and in a lower voice that was only partly intelligible. The remaining players then spoke the same text, but into closed cardboard tubes so that only muffled sounds were heard. The result was a complete jumble of sound, only partly comprehensible, forcing the listener to struggle for meaning even as the overall volume increased. A few notes from toy harmonica were heard, and a new recitation started – again by a single player speaking clearly, followed by the others as before. Several such cycles were heard, each time with more distraction. Sometimes this took the form of putting strong emphasis on every other spoken word, and at other times by the intrusive sounds of found objects. In a moment of Chinatown serendipity, a group of wandering New Year’s drummers arrived outside in Chung King Court and could be heard adding to the chaos of words and sounds in the performance space. This added the perfect sense of urgency to the need for comprehension. With so many ideas and voices coming at us in alternating layers of clarity and ambiguity, Book of Hours is an impressive metaphor for the state of communication in this age of social media and fake news.

After a short intermission AT A STEADY CONSISTENT RATE (2017), by Christine Burke, began with a lovely tutti chord from the assembled strings and woodwinds. The most musical of all the pieces in the concert, a series of long sustained chords were heard filling the performance space with a pleasing calm and serene sensibility. The players would sometimes enter at slightly different times, but this only added to the relaxed feeling. As the piece proceeded, however, the smooth sounds began to slowly dissemble. There was a scratchy sound in the cello, a flutter in the flute and a tightening in the violins. The pleasant chords of the beginning were decomposing into tension and uncertainty at a “steady and consistent rate.” Towards the finish the sounds became disconnected, ragged and strained, as one by one the players went silent. AT A STEADY CONSISTENT RATE is a brilliant  musical illustration of the oppressive nature of stress in our busy 21st century lives.

Saint-Girons (2018), by Erika Bell was next and this opened with a recording of indistinct voices and the sound of a bus pulling out into traffic. The cello sounded a long tremolo tone as the other strings made a smooth entrance. As the piece proceeded, more distinctly industrial sounds came from the speakers, and the acoustic instruments followed, crossing the line between the musical and the mechanical. Breathy sounds were heard from the flute, and the strings became tautly stressed. The effect of this transition was for the listener to continue to process the total sound as music, even as the more industrial components dominated. This unexpected search for context proved illuminating, the more so when the process reversed, with musical tones eventually prevailing. Towards the finish, there was a lush tutti chord that was almost symphonic in its grandeur. Saint-Girons is an intriguing exploration of the boundary between music and noise, inviting each listener to continually recalculate the coordinates of personal perception.

The concert concluded with Something about my Punctuation (2014 rev. 2018), by John Eagle. A performer was stationed at each of four chalk boards that were attached to the walls and began writing an extended paragraph. When the the chalk boards were about half filled with text, violinist Eric K.M. Clark sounded a sustained tone as he silently read the sentences. When a period was encountered, the tone ceased, another sentence was chosen and another tone initiated. The other performers, busy with their chalk writing, hummed a tone or struck a small bowl as they worked. The effect of four writers intently working on their texts along with the sounding of mystical tones and chant was surprisingly enthralling. It was as if we were observing the work of medieval monks laboring away in their scriptorium. There was a sense of the sacred that enveloped this activity, even though the words were not readable by the audience and the music was spare and softly played. Something about my Punctuation is an extraordinary work precisely because it manages to extract the essence of the liturgical from the simplest of musical materials and the most mundane of human activities.

New Experimental Works was a welcome and helpful overview of the breadth and intensity of the contemporary experimental pieces being created today. The call for scores and subsequent curation by the Southland Ensemble succeeded in bringing forward seven outstanding examples of what is being done by those working at the outer boundaries of music, text and sound.

The next Southland Ensemble concert will be at Automata on Saturday, April 6 at 8:00 PM and will feature the music of pioneering American composer Johanna Magdalena Beyer.