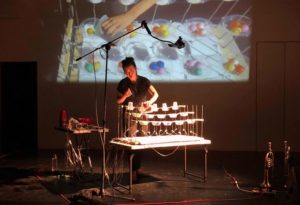 On March 27, 2019, People Inside Electronics presented Wired Wednesday, a concert featuring a set by Amy Advocat and Matt Sharrock, the Transient Canvas duo – as well as a sound installation premiere and a new piece for augmented trumpet. All of this was at Live Arts LA, a dance studio whose spacious performance floor was ideal for the occasion.

The first piece on the concert program was the world premiere of bzbowls (2019), a sound installation by Stephanie Cheng Smith. This consisted of some 15 plastic bowls suspended between fine wires, and each bowl fitted with a tiny vibration motor – like the one that vibrates your cell phone when you get a call. These were wired into a control panel so that the speed and intensity of the vibrations could be varied. As the motors were activated, Ms. Smith added various objects to the bowls, changing the pitch and timbre of the sound. Ping pong balls tended to lower the pitch and raise the volume. Small beads and bells generally resulted in a higher pitch and created a more musical sound. Adding a few tiny clothespins to a bowl produced a distinctive growl. Plastic cups were occasionally placed over the contents of the bowls and this tended to muffle the vibrations, but at times also seemed to amplify the sounds. An overhead projector gave the audience a view of what was being placed into, or removed from each bowl.

The 15 motors and the items inside the bowls produced an active overall sound, and it was a bit like being inside a small machine. There was a distinct sense of motion, but not necessarily of movement. The objects in the bowls were removed and replaced gradually so that the character of the sound was continuously changing between a low roar and a high ringing jangle. The motor controller had a pulse mode, so that the vibration motors cycled on and off for a second or two, and this had the effect of further exaggerating the sense of motion. Although generally percussive in nature, the sound seemed to gradually shift and change almost as a living organism. The ingenuity applied by Ms. Smith to a collection of simple materials made bzbowls an intriguing, miniature sound world based on artfully controlled vibration.

Next was The Sameness of Earlier and Later Times and Nows (2019), by Sarah Belle Reid, and this was also a world premiere and this was scored for augmented trumpet, laptop and modular synthesizer. The augmented trumpet is an impressive extension of the standard instrument and according to the concert notes “…uses sensor technology to capture gestural data such as valve displacement, hand tension and instrument position which is then converted into control information to interact with other instruments and systems.” Ms. Reid performed with great poise as she played the trumpet into a microphone where the sounds were processed by the synthesizer and PC before re-emerging through the speaker system. Maybe a third of what was heard during the course of this piece could be described as standard trumpet sounds, and even here the confident intonation by Ms. Reid left nothing to be desired. The tone from the horn was smoothly elegant, and the looped delay and processing only added to the intrigue. The feeling of the piece was both innovative and comfortably familiar. The sensors on the trumpet added greatly to the variety, including a new subset of percussive effects. Clicks, thumps and pops from the valves and triggers on the horn entered the mix, as well as the roar of breathy sounds in the absence of tones. As The Sameness of Earlier and Later Times and Nows amply demonstrated, Ms. Reid has greatly extended the possibilities of the humble trumpet into new territory by the application of innovative sensing technology and sound processing.

After the intermission, the Boston-based Transient Canvas duo took to the stage to perform a set of five pieces of new music for marimba, bass clarinet and electronics. Year Without a Summer (2017) by Kirsten Volness was first, and this was a statement on climate change. In 1815 a volcanic eruption in Indonesia ejected so much ash into the atmosphere that the summer of the following year was freakishly cold, causing frost and crop failures throughout New England and Europe. Year Without a Summer begins, appropriately, with a deep rumble in the electronics and a mysterious, primal feel from the bass clarinet and marimba. A rapid melody soon breaks out in the marimba – with just the slightest hint of a Steve Reich lick – while deep, sustained tones lurk below in the bass clarinet. The ensemble here couldn’t be cleaner and as the lines became interwoven the precision was even more impressive. The electronics were mostly in the background and underneath while the two acoustic instruments dominated. Year Without a Summer is a timely comment about the effects of climate change, and how this has already happened in history.

Exergy Bubblebath (2015) by Peter Van Zant Lane followed. In the concert notes this is described as a piece where “…the electronics latch onto the marimba, creating a hyper instrument that dances with the amplified bass clarinet in increasingly complex riffs and runs.” This opens with sharp, rapid phrasing and a generally percussive feeling. The disjointed passages in the marimba and bass clarinet called for playing that was amazingly precise. Ms. Advocat was especially accurate in her attack, weaving in and around the marimba and electronics with a steady confidence. The syncopated passages seemed only to increase in complexity as the piece progressed; ‘bubblebath’ being the appropriate metaphor for both the density and texture. A sudden shift to a more mysterious and serene section made for a nice contrast just before a short, rapid passage concluded the work. Exergy Bubblebath is a brisk jaunt, full of motion and energy, combining masterful integration of electronics with virtuosic playing.

Branches (2015) by David Ibbett was next and for this composition the electronic track was comprised of audio samples recorded by the Transient Canvas duo. This began with a warm marimba intro followed by the entry of the electronics along with a series strong clicks and low popping sounds from the bass clarinet. These percussive elements added to a the dance-like feel that soon evolved into a pleasant groove. For a time, a sweet marimba melody floated above some warm bass clarinet tones that gave an expansive, yet comforting feel. The percussive sensibility returned in force when Matt Sharrock began striking the marimba tubes with mallets directly and the pummeling built up to a wonderfully sustained clamor by the finish. Branches is a colorfully adventurous piece that manages to impart more than the sum of its many active parts.

Anatomy of the Infinite Machine (2017), by Marissa Hickman followed. The composer writes “Throughout the piece, time is dissected through an exploration of its different stages, presented in four movements… The electronic component of the composition utilizes recorded voice and synthesizers with applied processing and effects.” All four movements are heard without pause, each seeming to build on the last. The piece opens with slow, bell-like sounds in the electronics, establishing a mystical atmosphere that is aided by the subdued bass clarinet and marimba lines. Settled and calm, a soft voice is heard in the speakers reciting some arcane text while bowed marimba bars add to the sense of serenity. Anatomy of the Infinite Machine carefully mixes all the musical and recorded elements to convincingly portray time as an ethereal continuum.

The concert closed with Epidermis (2017) by Dan VanHassel, who writes: “In Epidermis the bass clarinet and marimba merge into a single machine-like entity playing funky rhythmic patterns made up of percussive sounds, with the electronics forming a noisy protective layer around the live players.” This began with a roaring noise in the electronics matched by breathy sounds in the bass clarinet. The marimba contributed a series of sharp percussive phrases from the striking of different parts of the instrument with brushes, sticks and and mallets. At length, pitched sounds were heard as Sharrock began to strike the marimba bars and tubes. Syncopated passages in the bass clarinet were nicely doubled by the marimba, building to an aggressively primal feel. The short, snappy phrases ultimately created a pulsing groove with classic minimalist sensibility. At the finish, mallets were flying all over the marimba with the bass clarinet adding to a rising tide of virtuosity. Epidermis is a lively work that tests the boundaries of what is possible to play on a marimba. Sustained applause followed.

The next People Inside Electronics concert will be given at Villa Aurora on Friday, April 19, 2019 at 8 PM. The program will consist of four works, including the world premiere of Genoël von Lilienstern’s new piece for solo violoncello and electronics.