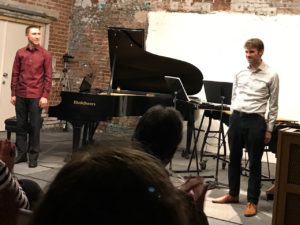 On May 14, 2019, Tuesdays @ Monk Space presented Incandescent Keyboards, Luminous Percussion, a concert of three important works from the Cold Blue Music record label. The Los Angeles premieres of Celesta by Michael Jon Fink, Four Thousand Holes by John Luther Adams and the world premiere of Pacific Coast Highway by Daniel Lentz were on the program. The cozy confines of Koreatown’s Monk Space filled with the agreeable sounds of music created by some of the best composers that the West Coast has yet produced.

First up was Celesta (2018), by Michael Jon Fink. This was performed by the composer on a Schiedmayer five-octave celesta provided for the occasion. Celesta is a suite of 12 solo miniatures, as described in the concert notes: “It projects a lyrical and poetic world of quiet intensity, bathed in the glow of delicately ringing metal.” All of the pieces are short – from just under two minutes to a little over six minutes – and were played continuously. The first piece, Call, was typical and began with a single line of notes that filled the room with bright drops of sound. The close acoustics of Monk Space brought out every detail of the spare melodies and limited harmonies that are characteristic of Michael Jon Fink’s music. The sharp, bell-like tones and reduced dynamic range of the celesta only added to the unexpected elegance that arose from the composer’s masterfully economical use of musical materials.

The pieces centered in the higher registers shone like bright stars. Some pieces were plainly magical while others were more introspective and questioning. There were pieces built on a simple five-note melody and others from just three or four notes. In one piece, two separate but intersecting melodic lines produced intriguing harmonies and engaging rhythmic combinations. None of this was fast or flashy in keeping with the transcendental sensibility of the celesta. The last piece, After the End, consisted of simple two-note phrases in dual harmony that strongly evoked a sense of wonder as it slowly faded into silence. A chirping cricket was heard above the stage, as if leaving the audience staring at the starry sky in a summer meadow. Celesta artfully exploits the expressive powers in the bright sounds of the celesta to create a thoughtfully satisfying, inner-directed experience.

The world premiere of Pacific Coast Highway (2014) by Daniel Lentz followed, a solo piano piece performed by Aron Kallay. In addition to the live playing, two prerecorded piano tracks are heard creating a dense and layered texture that is very appealing. This piece opens with quiet, repeating phrases that unfold into pleasing harmonic progressions. Polyrhythmic phrasing between the layers – ably executed by pianist Kallay – accentuate the harmonic changes and suggests the constant movement of traffic. A deep rumbling in the lower registers recalls the dramatic power of the pounding surf, often seen just a few yards from the roadway. At times the rhythmic lines are more sinuous, suggesting the twists and curves of the highway as it makes its way along the coast. New vistas continually emerge, and at times the dynamics become softer and cooler, as if looking out to the far horizon at sea. At other times the music is imposing and powerful, as when the coast mountains rise sharply upward from the edge of the ocean. The balance between the recording and the precise playing of Kallay couldn’t have been better. Pacific Coast Highway is the perfect invocation of the iconic California road trip along the coast north of Los Angeles.

The final piece on the concert program was Four Thousand Holes (2010) by John Luther Adams. Pianist Nic Gerpe and percussionist Ben Phelps were on hand for this Los Angeles premiere. This piece also includes a recorded electronic soundtrack comprised of heavily processed acoustic samples that provide a kind of foundational aura. Accordingly, a deeply mystical sound was heard from the speakers at the opening that expanded until it completely filled the room. A sharp piano chord followed along with some light notes from the vibraphone. The overall sound rose like a swelling tide, and at its fullest the percussion darted off in a series of complex independent rhythms. When the texture was at its thinnest, the piano and percussion seemed to compliment each other in counterpoint. As the piece continued forward, the process of gathering, cresting and dissolving repeated itself, always offering new and entrancing combinations.

The composer writes: “In Four Thousand Holes, strong musical currents fall and rise again and again… The mix of the live and electronic sounds blurs the distinction between musical figure and ground… we begin to hear long lines, counterpoint and maybe even the occasional trace of a tune.” All of this was in evidence during this fine performance at Monk Space. The electronics and acoustic instruments were always in balance, and the coordination achieved by Gerpe and Phelps was impressive. The broad swelling harmonies, technically complex rhythms, varying tempos and changing dynamics were all successfully negotiated by the players, who were rewarded by sustained applause at the finish.

Cold Blue Music, through its concerts and recordings, continues to be an important source of essential new music created on the West Coast. CDs for each of the pieces performed at this concert are available from Cold Blue Music.