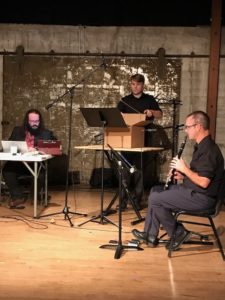 On Saturday, August 10, 2019 wasteLAnd presented its first Summer Academy for Composition Concert at Art Share in downtown Los Angeles. The work of eight emerging composers was performed at this event with each having participated in an intensive course of study in contemporary music during the previous week. Their pieces were work-shopped with the musicians of the wasteLAnd ensemble and reviewed by the Academy faculty of Michelle Lou, Michael Pisaro, and Brian Griffeath-Loeb. A fine crowd filled the Art Share performance hall on a warm Los Angeles summer evening in the lively downtown Los Angeles Arts District.

The first participant premiere was To the dust of the well or They wore the sky on their chests a breath, a glance, a sign, (confiding a shadow), by Adam Zuckerman. A string trio consisting of a violin, viola and cello was on the stage, with electronic accompaniment played through the large speakers mounted above. The strings began the piece with soft, sustained tones, but this was overtaken by a low rumbling in the speakers that gradually increased in volume until the strings were only barely audible. After a few moments, the speakers went quiet, issuing just a few sporadic clanks and rattles, and this pause uncovered the soft sounds still coming from the trio. The reappearance of the musical tones and the intriguing harmonies of the strings quickly captured the attention of the listener, despite the hushed dynamic. After a short respite, the speakers again became active, pouring out what seemed to be a stream continuous white noise that once more covered up the strings. The cycle repeated, so that each time the noise ceased and the sounds of the trio re-emerged, one’s listening and focus automatically increased. The brain became conditioned to suspend aural attention when there was noise, as if waiting for the weather to clear, so that the musical tones could be given full concentration when they reappeared. To the dust of the well… is an interesting experiment in the engagement of listener perception by the alternation of loud noise and subtle musical sounds.

Luster was next, by Daniel Allas, and this featured a much larger ensemble that included bass clarinet, prepared guitar, percussion, euphonium and piccolo. Luster opened with a random series of solitary clicks that gradually increased in frequency. This was soon joined by a sustained ratcheting sound, filling the space with a wonderfully rhythmic atmosphere. Sharp piccolo riffs spiked through the air, adding to the free-form feel. A loud, sudden and sustained chord from the winds completely recast the texture, however. The prepared guitar, set flat on a table and bowed with a dowel, soon dominated with a series of rough, scratching sounds that immediately produced a sense of high anxiety. Just when it seemed unbearable, the guitar sounds ceased and a low fluttering came from the euphonium and bass clarinet. A soprano voice called out in a mournful wail, bringing the sense of distress to a maximum. The various parts began to drop out until only the low flutter of the winds remained before all sounds stopped suddenly. Luster fearlessly explores new trails into the unsettled territory of the powerfully distraught.

Evolvement II.B, by Kimia Koochakzadeh-Yazdi followed and this began with the soft sound of an inverted metal bowl rubbed on a large square wooden surface. Airy sounds issued from the flute and clarinet while a low tremolo was barely heard from the viola. The speakers contributed some brief tones before dispensing a deep growl that gradually increased in volume. The instruments remained very soft although the air sounds from the flute were strongly audible and helped to create a ghostly atmosphere. A rubber ball dragged over a drum head and amplified contributed a loud fluttering sound that dominated the the unsettling texture, and added a powerful sense of menace. The instruments followed with a greater volume and the flute again was effective with the unlikely technique of rattling its keys. A hair-raising blast from the piccolo and the rising of the instruments in a great crescendo was heard, followed by the sudden cessation of all sound. Evolvement II.B is an instructive study in the building of tension through unexpected sounds made on standard instruments.

Webkitz, by Kelley Sheehan was preceded by a short explanation of the QR code that was attached to each concert program. At a certain point during the performance, those in the audience with cell phones were invited to take a photo of the QR code, and this would bring up a website that would allow individual interaction with the piece being. An overhead projection displayed a color-coded grid . A simple tapping rhythm was heard in the speakers, and as this repeated it increased in complexity. After a minute or two, a performer entered the stage and sat at the table holding a computer. By activating parts of the colored grid, as projected on the screen, additional rhythmic patterns were formed. The performer than rose from the computer table, crossed the stage, and began adding to the rhythms with a drum. This process occurred a total three times – a new performer arriving at the computer, adding some new rhythms from the grid, and moving to an acoustic instrument on stage, to add more notes. By now there was a great cloud of sounds – the rhythmic clicking in the speakers as well as drumming and mournful guitar sounds coming from on stage.

At this point several players walked in front of the audience with their cell phones, activating the QR code, and this was the signal for the audience to do the same. The website that resulted was a miniature version of the rhythm grid on the projection screen. A good number connected, and soon a new wave of rhythmic clicking was heard from many phones, with the audience now manipulating the grid to create new patterns. The composer of this piece also created the website and programmed the grid responses – quite an achievement. Webkitz is a visionary demonstration of what can be done with commonplace technology to bring audience participation into new music concert practice.

Following the intermission, the ungainly titled Monolipid(s), For Loops(s), DHHS(s), Colonoscopy(ies), Phenycyclohexylamine(s), and the Eloquence of Post-VR Sadness in thuh Modern Screen Economy(ies), by JP Lempke was performed by an ensemble of found and unusual instruments. There was a plastic tube with a clarinet mouthpiece attached, a flute of some sort played on end and into a glass of water, a large cardboard box that was bowed on one flap and a computer that fed electronic sounds into the speakers. This began with a low hum and static coming from the speakers while the ghostly flute and clarinet played together in a soft harmony. The most arresting sound, however, came when a cello bow was drawn across the loose flap of the cardboard box. Often the most extraordinary ideas are the simplest, and this was immediately obvious from the great roar that filled the room with each stroke of the bow. The rough and unsettling sounds, appropriately amplified to a satisfactorily high volume, evoked a portentous feeling of menace. The plastic clarinet began screeching into a tall glass of water, adding a palpable sense of panic to the proceedings. The shrill cries of the winds, a rumbling from the speakers and the loud bellowing of the cardboard box all combined to produce a powerful cacophony, all the more impressive when it suddenly ceased. Monolipid(s)… is a subversively inventive piece that draws out raw primal feelings from the most elementary of sonic materials.

Sitting on a Broken Periphery, by Golnaz Shariatzadeh, followed a somewhat parallel path. A flute, bass clarinet and a table of found objects comprised the ensemble. Quiet, airy sounds in the bass clarinet, accompanied by crisp notes from the flute opened the piece. Various percussive sounds joined in – the slap of a thin wooden board along with some metallic rubbing. There were no electronics and the overall dynamic was generally soft and reserved. The introduction of a metallic ratcheting sound added a bit of tension and this was increased dramatically by the scraping of the edge of a cymbal across a metal tray. A wad of crumpled aluminum foil was also rubbed on the tray surface and the unsettling effect was something like fingernails on a chalkboard. Towards the finish, the woodwinds combined in a series of high squeals bringing the anxiety to a peak before slowing to a finish. Sitting on a Broken Periphery accurately describes exactly that, resourcefully incorporating commonly found objects and just two acoustic wind instruments.

Nathan Corder’s Untitled, was very different, performed by a conventional acoustic string trio consisting of violin, viola and cello. Input from the microphones on stage was gently processed by the electronics and quietly projected out through the speakers.  This began with a soft, high-pitched sound from the cello, bowed very near the tuning pegs. The viola and violin contributed similarly wispy tones and the effect a kind of ghost-like desolation. These sounds suddenly ceased and were replaced with tones in the middle registers of the strings. A sliding, descending tone in the cello created a worn and weary feel, but this, in turn, was supplanted by warm sustained tones in all three instruments that included some lovely harmony. An extensive variety of string sounds followed including a repeated squeaking that suggested a rusty windmill, a low growling in the cello and a series of harsh scratchy sounds from the violin that added a distinct feeling of tension. All three strings then combined to conjure a glowing, alien feel followed by sustained tones that were slightly syncopated to create an appealing, rhythmic flow. Low tones followed, bowed just off the bridges and then some elegant phrasing in the middle registers that gradually layered into a wonderfully complex and dense texture. The piece concluded with a distant, siren-like sound that receded into the silence. The writing and playing throughout was excellent, a credit to the musicians and a remarkable achievement for the composer who admitted later that he was not himself a string player. Untitled is an impressive effort, extracting a surprising range of sounds and emotions from just three stringed instruments. 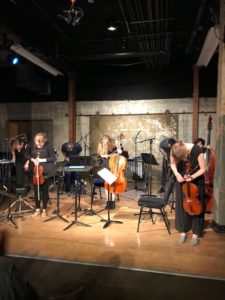 The concert concluded with all hands on stage to perform arcanum, by Alyssa Aska. Nicholas Deyoe conducted a well-furnished ensemble that included strings, woodwinds, brass and percussion. arcanum opened with a soft, impressionistic feel as continuous tremolos in the woodwinds and strings were counterbalanced by soft, sustained tones from the trombone. There was a warm and organic feel to this but the chords in the woodwinds and strings began to change by a few notes here and there to gradually introduce a growing sense of anxiety. The sharp sound of bowed percussion added to the tension and the notes from the other instruments began to dissemble and sound disjointed. More changes to the harmony in the winds added a sinister feel to the piece, completing the overall transition from a sunny idealism to shadowy menace. arcanum has a confident, symphonic feel, and this well-crafted piece has a clearly defined and smoothly articulated emotional arc. Sustained applause was heard throughout the hall as the musicians took their final bows.

This concert was a notable success, and the participant composers presented works that contained a commendable enthusiasm for experimental techniques combined with considerable creative energy. Great credit goes to Nicholas Deyoe and the staff of wasteLAnd for bringing this ambitious project to fruition. To have an established new music group in Los Angeles provide a program to assist young composers is truly extraordinary and worthy of emulation.

The wasteLAnd musicians are: