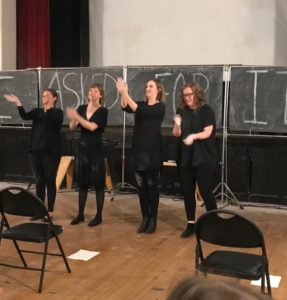 Time With People, Op. 1 (2013) by Tim Parkinson began the program with two performers sitting at a table holding a few snacks and cans of soda. This setting might have been two people meeting for lunch, or on their break at work. The two began speaking about the everyday issues in their lives – the difficulties of getting up and ready for the day, vacation in Hawaii, peculiar eating habits of the dog, the challenges of growing house plants. Their words were more like a stream of conscience and were not a conversation directed at each other. They simply talked on at length until a buzzer sounded, when one of the performers stopped speaking. A second, different buzzer, sounded and now both conversations were suspended while some familiar classical music was heard through the speakers on stage. A few moments later, the first buzzer sounded and the stream of words started up again from the first person. The other followed as the second buzzer was heard. This pattern was repeated with several variations as the two buzzers were sounded at different times and in different combinations. The topics changed from time to time, but were always about intimate commonplaces and never serious. All of this was very engaging and at times very entertaining – the audience broke into knowing laughter on a number of occasions. Time With People is a powerful commentary on our everyday conversations – we generally talk at people about the everyday banalities of our lives – and do very little listening in return.

Selections from Retrouvailles (2013) by Georges Asperghis followed. This was a series of three short scenes that began with two performers meeting mid-stage, embracing and patting each other on the back. This patting became faster and louder, and was soon distinctly rhythmic. Some French words were shouted, but there were no sung vocals or other music. The rhythms continued in this fashion for some moments before slowing, with the arms freezing in mid-slap at the finish. The second vignette had the two performers standing side-by-side and stamping their feet in a rhythm. Finger snapping, hand-clapping and side-slapping were added to this and the result was a cleverly choreographed bit of live percussion. The final scene had the two sitting at a sturdy wooden table with a wine bottle and a large glass. These were set sliding noisily across the table in a tidy rhythm that morphed into a rattling and pounding as the piece progressed. Some shouting soon accompanied these gestures, as might be heard in a rowdy bar. For the finish, the bottle was opened, the wine poured into the glass and the performers each took a cordial sip. Retrouvailles reminds us that music and rhythm are implicit in our most commonplace interactions, and how much we could add to our everyday life by being mindful of the musical possibilities.

More acting and playing followed as the percussion recording ceased. There was a furious stretch of mimed cello and violin playing, a passage filled with complex pizzicato, and a bit of joyful singing and strumming. When actual tones were produced, the playing and vocals were excellent. On the screen, lions were seen pacing back and forth in a small cage. There was more pantomime playing of the stringed instruments which was followed by a soft scratching of bows on the strings and more acting. The piece ended with some vocals and a rough screech on the bowed cello as the violinist pantomimed an accompaniment. All the acting, singing and playing certainly highlighted the versatility of the performers, – Jennifer Bewerse and Adrianne Pope – considering they are from different groups. Wash Me Whiter Than Snow blurs the line between intention and reality, leaving the audience to sort out their impressions individually.

The premiere of Speech Suite (2019) by Todd Moellenberg followed, and this opened with a single word heard from the speaker. Two performers on stage, cellist and flute, began speaking concurrent phrases that were layered under the words emanating from the speaker. An intricate cello solo followed, and the sounds mimicked the rapidly spoken phrases. The listener’s brain was free to interpret the cello sounds as music or as speech, adding to the intrigue. More spoken phrases were heard from the speaker and the flute now accompanied, accurately mimicking the speech patterns. The two sets of sounds heard simultaneously created a pleasant confusion in the listener’s brain, sometimes the words were heard as music and sometimes hearing the flute tones as speech. The cello, flute and speaker were heard in various combinations in this way as the piece proceeded. Words and musical tones that resembled the patterns of speech delightfully overlapped. The two musicians displayed great skill matching the cadence and rhythmic patter of the spoken words. At the finish, a video of a Congressional hearing into some political foolishness was shown on the overhead screen while the stage speaker kept repeating “Liar!, Liar!” as the accompanying flute and cello imitated the same words. Speech Suite was greeted with appreciative laughter and extended applause.

The final piece on the program was I Delayed People’s Flights By Walking Slowly in Narrow Hallways (2005) by Mayke Nas and Wouter Snoei. Four performers were seated across from four large chalkboards. One performer began the piece by stamping on the floor as the others bowed from the waist while sitting down. More stamping by the others followed, in no particular order and without a common beat. Electronic sounds were heard from the speakers as one performer got up and drew a line on the chalkboard. Other players followed and more lines were drawn until a message emerged: “I Came Into The World.”

This set the pattern for the piece as it proceeded – single lines or single words were drawn until a phrase or message appeared. Some part of this would be erased and more words or letters added to change the meaning. In one sequence “I Approved Of Myself” was modified to “I DisApproved Of Myself” by the addition of just one syllable. “I Indulged in Self Doubt” became “I Indulged in Self Promotion.” All of this happened in fairly short order, the phrases and thoughts morphing at the speed of introspection with the players rapidly moving between the line of chairs and the chalkboards. In one sequence “I Called God Dead” appeared just as a rumble of thunder was heard from the speakers, and the message quickly became “I Called God Infallible”, which became “I Called Art Infallible” which morphed into “I Called Love Infallible.”

The arc of these visible thoughts, beginning with “I Came Into The World”, became evermore philosophical, illuminating the process of self examination in a new and striking way. The various noises coming from the speakers might have represented the uncertainty and buzz of distractions that are part of any mental process. The clear sequence of messages that appeared in written form on the chalkboards, however, tended to remove the normal self doubts that arise in a purely internal  rumination.  At the finish, the players covered all four chalkboards in a jumble of many words written in very small letters, as if ambiguity and confusion had overcome the previous clarity of thought. The players then began erasing all of this to reveal a final message hidden under the jumble: “I Asked For It.” I Delayed People’s Flights… is an extraordinary exploration of the thought process of self examination. The players received an enthusiastic ovation for their efforts.