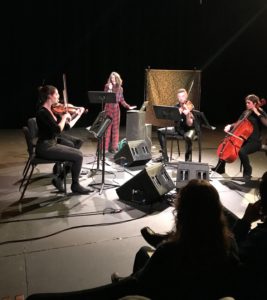 Darkness is Not Well Lit (2016), by Nicole Lizée, opened the concert and for this piece the quartet was seated on low risers with an floor fan stationed in front of each player. The concert notes explained that this work is “…a sonic imaging of a film noir for string quartet as seen – and heard – from the vantage point of an electric fan.” The performance space filled with the recorded roaring of a large fan at the beginning, and a series of simple phrases rose quietly from the cello and viola. A violin entered next, with a lovely sustained tone that arced above the deep chords in the lower strings. The moving fan blades in front of each player acted on the musical sounds to produce a sort of fluttery feel, especially in the sustained notes of the lower registers. The effect was both curious and beguiling, effectively connecting the playing ensemble to the fan sounds coming out of the speakers. This effect would likely have been more pronounced in a smaller venue, but Darkness is Not Well Lit is nevertheless an intriguing implementation of a surprisingly simple experimental technique.

String Quartet (2014), by Laura Steenberge followed, a piece written for the JACK Quartet and inspired by wild things: wolves, whales, crows and cuttlefish. The opening is a series of strong, sustained chords in the cello and viola that evoke a lonely sadness. The violins join in – without any pulse or beat present – to create a sort of distilled sorrow. The viola tones move up in pitch as the violins shift into a high, whimpering cry as might be heard among wolves in a lonely wood at night. After a short pause, high, thin tones are heard in the violins while the cello scratches out rough and rugged sound below. The upper strings emit a series of screeches that soon coarsen into harsher tones. A series of repeating notes in a tutti chord, that becomes darker and discordant as it lengthens, is particularly effective. Humming by the players adds to the richness of the sound and a short a cappella section finishes the piece. The playing of String Quartet is evocative and skillful, complimenting the organic eloquence of the music.

The world premiere of Quartet for the Beginning of a Time (2019), by David Rosenboom, was next, a complex and sophisticated work that manages to artfully balance earnest abstraction with settled convention. The structure of the piece is based on the relationships of a series of catenaries – curves that guide the diffuseness and clarity of various musical parameters. The composer writes that these relationships include the “…clarity of tonal reference dissolving into atonal fields and re-emerging later, clarity of perceivable pitch evolving into and out of relatively non-pitched sounds, independence versus synchronicity among players, relational simultaneities, temporal densities and speeds, and shifting complex dynamics of simple versus compound time forms and melodic shapes.”

Quartet for the Beginning of a Time opens with sustained tutti chords joined in agreeable harmony, yet with an expectant feel. A series of squeaks and chirps soon break out in the upper strings and this gradually increases until it dominates the texture in all registers. The tutti sections, when they occur, become ever more strident and seem to further the incoherence of the melodies. It is as if the music is undergoing a nervous breakdown. As the piece proceeds the dissembling becomes more intense and the higher parts break into a series of independent and rapid phrases. Pizzicato and extended techniques take over, with much rapping and knocking of the instruments. A loud snapping sound is heard from a cello string, and the ensemble pauses – marking the boundary of two catenary curve sets in the structure. The quartet resumes but the sounds are now clearly chaotic with rapping, squealing and disconnected flurries of pizzicato spraying out in all directions – it is as if the music is falling in and out of lucidity. The long flowing phrases of the opening return, but there is an undercurrent of uncertainty and instability as the piece concludes. The brilliant playing of the Isaura Quartet is a technical triumph, equal to the emotional demands of the music. Quartet for the Beginning of a Time is a remarkable and unsettling work that applies the raw power of mental disintegration directly to the emotions of the listener.

Alchemies (2019), followed, another world premiere, composed by Carmina Escobar and Sean Deyoe. This was staged in total darkness with several projectors lined up across the front of the performance space with screens placed opposite and to the rear. Alchemies consists of six short movements titled “Recipes” that are numbered 0 through IV. The concert notes explain that “… we seek to make something from nothing. Transmutation. Space, action and time, in dialogue. Moments of tension and resonance. Entropy. Feedback. Synergy. What we see are not the processes but their shadows, neither tangible nor intangible.”

Accordingly, each of the movements incorporated the light from the projectors to create shadows or images on the screens behind. The players moved about as needed, some movements were performed by a single player, others by the full quartet or various subsets. All of this was done completely from memory. The first movement, “Recipe 0 – Prima Materia” featured the full quartet spread about the stage, with the circular light of a projector shining on each. The strings began with quiet skittering that grew in volume to crate a sustained sense of anxiety. The tension increased as the quartet became less coherent, eventually becoming completely unbalanced by the end of the movement. In another movement, a solo player was hidden behind a screen while her projected image was seen on the front of the screen by the audience. Other movements provided different images and sounds. The cello was heard in one movement alone, bathed in a blue spotlight and emitting soft scratching sounds that evolved into some lovely double-stopped deep tones. In the final movement “Recipe [ ] Ravens” the cello and violins busily created scratching and skittering sounds while a sustained viola tone hung in the air underneath. The piece ended with long sorrowful notes and a soft crying in the upper strings that was full of pathos and very effective. Alchemies combines artful imaging, imaginative staging and solid playing to explore new performance possibilities for venerable the string quartet.

The West Coast premiere of Behind the Wallpaper (2013 – 15), by Alex Temple followed the intermission, and for this the Isaura Quartet was joined by vocalist Julia Holter. A song cycle of transformation, the composer writes that “the music slips unnoticed through the cracks in the wall, drawing on indie pop, Weimar cabaret, Elizabethan music, and 19th century Romanticism.” Behind the Wallpaper is set in ten movements and the first, “Midnight Bus” begins with chirping crickets heard through the speakers followed by violins that mimic more of the sounds in a lonesome night. The voice enters, accompanied by some lovely tutti chords, with the music and text setting the stage for the intimate interior drama that animates this work:

You stayed too late.
You had to take the midnight bus.
It stopped at all the dying malls in the area.

As more movements unfold, a quietly ominous feeling emerges from unexpected changes in perception and attitude. A shower head looks diseased, contemporary life and styles are increasingly suspect, the protagonist’s part-time job is tedious. The music portrays all of this with a superbly expressive agility. By the fifth movement, “Science Park”, the tone has become even more menacing with a low roar in the speakers and dramatically sung lyrics:

You stood on a grassy expanse,
a nuclear reactor humming beneath your feet.

The following movement, “Fishmouth” is brightly surreal, with a lilting waltz tempo and unlikely lyrics. The music is conventional and light, making a fine contrast to the text.

So that’s your secret,
You’ve been swallowing live fish?

It was the end of your second date.
Everything was going well.
…

But as you passed beneath a streetlight,
he suddenly stopped.
A look of horror passed over his face.
He pulled away,
and never returned your calls.

Towards the finish of the piece there is a brief return to the opening calm, with pastoral sounds of nature, bird calls and familiar domesticity in the warm chords of the strings. The music turns darkly ominous, however, as the lyrics describe a changing orientation of the once-familiar house. Rough scratching sounds in the violin and viola underscore the confusion as the protagonist becomes increasingly perplexed. “Spires”, the last movement sums up as the voice and soft strings finish with gentle sounds:

Someday the rising sun will reveal another world on top of our own.
…
And you’ll know that all of this was here the whole time.
And you’ll understand that you have finally come home.

The shifting musical styles throughout this piece are sometimes abstract and complex while at other times comfortable and familiar – all of which is brilliantly handled by the Isaura Quartet. The vocals are seamlessly supported and integrated to the electronic effects. The fluid singing of Ms. Holter is perfectly suited to this piece and obviously written to her many strengths. Behind the Wallpaper is a stylish and thoughtfully written set of art songs, magnificently sung by Ms. Holter and skillfully accompanied by Isaura Quartet.

The Isaura Quartet is: