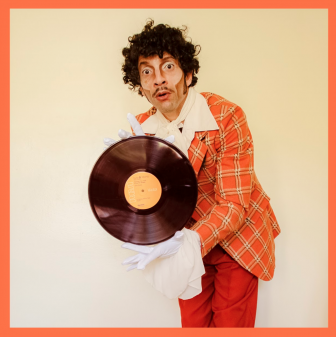 With most live performance venues dark during the pandemic, musicians and producers have sought to find effective ways to reach their audiences electronically. On November 14, 2020, REDCAT offered Daniel Corral’s Concerto for Having Fun With Elvis Onstage and Count In! on a pay-per-view streaming basis. Using the superior technical resources of the REDCAT, the virtuosity of the Now Hear Ensemble and the acting talents of Alexander Gedeon, the music of Daniel Corral was vividly delivered despite the current COVID surge.

The two Corral compositions performed for this event were vastly different in character. Count In! is an electronic/video piece that draws on Corral’s minimalist instincts and flows naturally from his more recent experimental works. The second work, Concerto for Having Fun With Elvis Onstage, is a fast-paced pantomime deconstruction of the banality of celebrity whose musical accompaniment owes more to Broadway than to Steve Reich. Both works were carried off with exemplary production values and extraordinary performances, making the case that new music concerts can be experienced online at a high level.

Count In! was first, a video accompanied by the processed voice of Poly Styrene singing “1, 2, 3, 4” from a song by X-Ray Specs. It is begins with a low klaxon-like voice flashing out warnings, like a fog horn on a rocky coast. Higher processed voices join in, but at somewhat faster rates so that the sense of urgency increases with each new entry – the feeling is akin to a convergence of sirens in the street. The mounting chorus of voices bring a sense of growing panic, as in a frightened crowd. Meanwhile, the screen displays two rows of four digits – all zeroes. As the piece progresses some of the digits begin to flash from zero to one, and back again. More digits change, and soon both are rows percolating with various combinations of 0 and 1. A bit later, some of the digits begin changing from 1 to 2 as the pitch of the voices goes still higher. The appearance of more and higher numbers on the screen reinforces the relentless uptick in the average intensity level and the listener’s brain instinctively connects this with the increasingly insistent sounds in the voices. The colors of the numbers seem to go from cool and dark to bright and hot, adding to the sense of alarm.

The voices are clearly human but highly processed, and there are no intelligible words, but a strong sense of distress is clearly conveyed. The type and character of the sounds and the changing digital display act on our modern conditioning – everything we are seeing and hearing indicates a pending catastrophe. The digits on the display eventually begin to flash the number 4 and the voices seem to morph into an electronic bleating. The sounds get more electronic and less human, but remain frenetic. Now a digit goes to 0 – then another, and the voices decrease accordingly. Eventually only the low roar of the beginning voice remains just before all goes silent.

Count In! is masterful in its use of a simple video display and basic sonic materials to act on all our conditioned responses to communicate a state of high anxiety – a thoughtful commentary on the external forces that are at work to shape our contemporary existence.

My podcast partner, Jim Goodin, subscribed to the concert. Here are his thoughts on the first piece:

“Count In! is a 2 x 4 matrix of 0-4 sequences looping throughout the work in evolving colors, from florescent to black light – the latter my favorite. The digital numbers count through the 0-4 pattern per matrix cell, growing to 4444 and reversing to end in all 0’s when the piece concludes. The musicality in the beginning was like approaching sirens, growing to almost seamless tones at a point, and then close to a human chant at about 10 min in. The audioscape grew more and more hypnotic as the morphing combined with the looping count, the overall feeling to me was futuristic in an Orwellian kind of way.”

The feature work of the concert was Concerto for Having Fun With Elvis Onstage, described in the program notes as “… a sort of ‘ghost opera’ — creating a memetic hologram of the endless purgatory of celebrity afterlife.” This is based on a 1973 record release that consisted solely of Elvis Presley banter with his adoring audience between songs. There is no Elvis Presley music in this, just his interaction with cheering admirers and screaming young girls, all conveyed with an abundance of suggestive innuendo. This forms the libretto of a pantomime, with Alexander Gedeon playing the character of Elvis and the Now Hear Ensemble providing emotional color in the background music. Gedeon, who also co-directed the stage production, is dressed in a clownish manner with a loud floppy suit and oversize bow tie. His face is heavily made up, but his countenance is generally sad, like a latter-day Emmett Kelly. This sets the tone for the work – Presley is portrayed as a tragic figure, forever trapped in the banality of his celebrity. It is a contemporary deconstruction of the legend, where his music is forgotten and only the Elvis impersonators live on.

The piece opens with Elvis placing a large vinyl record on a turntable, turning it on, and beginning his patter with the audience during a show. All of the words from the recording were lip synched by Gedeon, and this is an impressive feat given the length of the performance. The accompaniment by Now Hear is very solid and forms a running commentary on the Elvis discourse. The mood of the music changes on a dime to fit the emotion of the moment – fast and jumpy, soft and nostalgic, sad or wistful – and everything in between. The composer was at the piano and also played guitar with Brian Walsh on clarinet and Federico Llach on double bass – all gave outstanding performances. Despite these slender musical forces, the quantity and quality of the accompaniment was impressive and provided an effective counterweight to the stream of words coming from Elvis.

“Gedeon’s interpretation was constant motion of the iconic character, never allowing a breath of rest for the audience and yet never really completing an entire thought. There were a series of false starts by Elvis, beginning with ‘Well well well…’, but never breaking into song. The Now Hear Ensemble was equally mercurial, issuing a stream of changing musical cues that reminded me of 60’s television. The musicians were spot-on in timing and interpretation, with no identifiable reference to any specific Presley song, but following Gedeon’s Elvis. The result was a perfect parallel, the accompaniment following the curve of the piece to ‘that which never happens’, and just keeps going on to the next moment.”

The staging, lighting and video work for the performance was of a very high quality. The sound and images coming over my internet connection carried the concert with a fidelity that was more than satisfactory. A solid effort by the production team, setting a high bar for future streaming concerts. Concerto for Having Fun With Elvis Onstage was a technical as well as artistic success, and delivered a pungent criticism of mid-20th century popular culture.