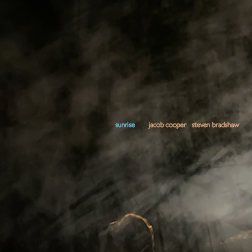 Sunrise is a new CD by Jacob Cooper and Steven Bradshaw, recently released by Cold Blue Music. Jacob Cooper has a long and distinguished composing career including commissions by the Los Angeles Philharmonic New Music Group, Eighth Blackbird, the Calder Quartet and others. His music has been performed by the JACK Quartet, the Minnesota Orchestra, Kathleen Supové, Timo Andres and many other well-known new music soloists and ensembles. Steven Bradshaw is a founding member of the two-time Grammy Award-winning ensemble The Crossing and has appeared with the Philadelphia Chamber Orchestra, Bang on a Can and the Network for New Music. Bradshaw is also a visual artist whose work has appeared in galleries around the world. Additional musicians heard on this CD were Dynasty Battles, piano, Clara Kim, violin and Timothy Munro, flute/piccolo.

Consisting of a single 32 minute track, Sunrise is a contemporary electro-acoustic update of or allusion to the classic The World Is Waiting for the Sunrise. Some of us may remember the Les Paul and Mary Ford recording from the 1950s, but it was originally composed by Ernest Seitz and Gene Lockhart over 100 years ago, during the Spanish Flu pandemic of 1918 – 1920. The piece has subsequently had a long history of formal and popular performances by artists ranging from Fritz Kreisler to Willie Nelson. Cooper and Bradshaw collaborated back and forth on the piece over the course of the pandemic year 2020 while isolated separately in quarantine. The composers write that “Sunrise emerged from a constant exchange of material: Steven would record melodies, improvisations, motifs, vocal scrapes, hisses, whispers and screams. Jacob would sonically manipulate them and generate new material, forging it all into a compositional framework.”

The iterative nature of the composing process results in a layered texture that slowly changes its emotional surface as the piece unfolds. Soft buzzing and hissing open Sunrise and a series of quiet voices enter with an indistinct vocalise combined with sweet, sustained tones. What sound like male and female voices are heard separately with occasional sharp beats in the bass register. There is a prayerful, chant-like busyness of independent voices, that are active but do not share the beat. At this point there are no clear melodic clues to the popular origin of Sunrise, but there is a general sense of well-being in the vocal harmonies amid the mysterious and ritualistic feel.

At about five minutes, the bass beats are again heard, adding drama. Deep, processed male voices chanting in very low tones with unintelligible words enter, adding a faint sense of menace. By 11:00, a series of languid, interleaving vocal passages dominate that feature some really lovely harmonies and intelligible lyrics from the historical piece. The effect is soothing to the ear and full of reassurance.

By 16:00, however, strong distortion and harsh buzzing have replaced the calming vocals, and there is a clear change of emotional direction. The feeling is now more intense and mechanical while a single voice struggles to be briefly heard above the sea of harsh sounds. The darkness of pandemic and isolation seem to be descending on the world. There is little consolation here, but plenty of negative emotion. The sounds are dissonant, distorted and grating to the ear. A scattering of plaintive vocals are heard, but these are all but buried in the sonic chaos.

By 22:00 the voices fade away and the distortion becomes noticeably softer. Some light piano phrases enter as a repeating melody, becoming louder and more hopeful as the distortion diminishes. The voices now return in force, slowly chanting the familiar words of the original: “Dear one, the world is waiting for the sunrise…” This adds to the sense of uplift as the piano line continues to spin out its optimistic melody. Even the distortion, now much reduced, seems to be contributing to the harmony of the lyrics. With a decrescendo, the voices, piano and electronic distortion slowly fade away to finish the piece.

There have been many virtual performances in the past months as a response to the conditions imposed by the pandemic. Less common, perhaps, are collaborative works like this one that have been created while the composers are in forced separation. Sunrise is a vivid narrative of the pandemic story – both then and now – artfully crafted and masterfully realized.

Sunrise is available directly from Cold Blue Music, digitally from Amazon and as a CD through other music retailers.