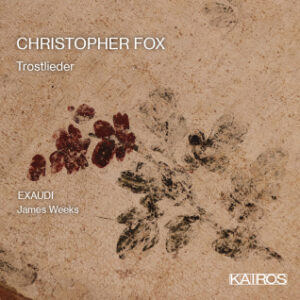 British composer Christopher Fox’s latest portrait CD on Kairos focuses on music for vocal ensemble. Exaudi, conducted by James Weeks, is one of the finest groups for recent repertoire in the UK, and they present this program with characteristic care and detail. This is their third disc devoted to Fox’s music

The four Trostlieder Widerwertigkeit des Kriegs (“Poems of comfort in the awfulness of war”) (2015) were written as companion pieces to Heinrich Schütz’s 1648 collection Geistliche Chormusik. Published at the end of the Thirty Years War, it is powerful music imbued with the hard lessons dealt by the conflict. Fox’s own ancestry plays a role in the impetus for the piece. Some of the worst fighting late in the Thirty Years War was in Pomerania, where the composer’s relatives lived until 1945. Fox chose to respond to the commission with settings of poems by seventeenth century poet Martin Opitz. Each of the four volumes in Opitz’s Trostgedichte contains more than 600 lines written in Alexandrine verse. Fox chose to take 44 lines from each book, setting four songs that epitomize the aspects of each volume.

The first song depicts depredations inflicted upon common folk, farmers. In addition to articulated polychords, conjunct melodic gestures are passed among the voices. The latter section features fortissimo keening set against homophonic passages in the low register. Interlocking tenor voices are introduced, bringing the piece to a close. The second song discusses the “Wheel of Fortune” that governs the vicissitudes and blessings of life. This equanimity is addressed by corruscating lines accumulated into verticals, systematically repositioned in register. Upper register clusters and a high soprano melody begin the third song, which extols the virtue of mothers and indicts those who are prideful. Then the material moves successively down each section of the voices, ending with the second basses, each providing another aspect of hope or despair that Opitz juxtaposes in the poem. The fourth and final song also brings together two ideas, those of hope and of a brave death in war. Ricocheting counterpoint and segmented sections create a slow build to intricate and clarion chords, which repeat a regular progression. This texture dissolves into an angular melody in octaves. The climax features a blossoming of the harmony and a chant-like melody in the soprano.

A Spousal Verse (2004), written for the Clerks, is a harmonically rich setting of the sixth stanza of Prothalamion (1596), by the Elizabethan poet Edmund Spenser. Fragments of melody are interwoven into brief contrapuntal units. Birds, Venus herself, and Peace are implored to bless the wedding, with the last verse serving as a refrain: “Upon your Brydale day, which is not long: Sweete Themmes run softlie, till I end my Song.”

Canti di carcere collects three madrigals – fantasma, senso comune and suo tormento – that were contributed to Exaudi’s madrigal book project from 2013-2018. The texts are from interesting sources. fantasma takes its text from the Marxist writer Antonio Gramsci’s Quaderni del carcere (Prison Notebooks), in which he ponders the significance of Dante’s ideas about society, judging them to be utopian instead of true political theory. Despite the intellectual character of the madrigal, the music focuses on the emotions the poet feels while being in prison, his suppositions about Dante standing in for his own frustrations about the nature of society. senso comune is also a setting of Gramsci, perhaps the most famous segment of the notebooks: “Every social stratum has its own ‘common sense’ which is ultimately the most widespread conception of life and morals.” It ends with a brief quote from Dante, further cementing the connection between the two writers. Conjunct lines sit astride secundal verticals in a slow-moving reverie that also explores a stratified pitch vocabulary. Gentle yet tense intervallic relationships between closely following lines and verticals, sung pianissimo, provide an otherworldly ambience that befits the text. Towards the very end, the chords go sideways, only to reveal a melody in octaves that brings the madrigal to an enigmatic close.

The third and final madrigal sets a passage from Canto X of The Inferno: “We see, like those who have imperfect sight, the things that are far from us; to that extent the supreme leader still shines on us,” and Gramsci’s commentary on the text. Accented hocketing and brief pauses interspersed with verticals converge into a passage of abrupt staggered entrances. Consonants begin to be accentuated, and a soprano duet and bass sonorities are juxtaposed. Once again, snippets of melody are interspersed with rests. The unpredictability of attacks unmoors the music from meter, creating instead fluid lines between the silences. The proceedings speed up, creating articulate phrases and diminishing the duration of rests. The ending is homorhythmic, abrupt.

In Preluding (2006), the poem Was it for this (1798) by William Wordsworth is set in unusual declamatory fashion. The singers are to vocalize using the poem, the words understood to them but not to the audience. In the score, Fox asks for the effect to be like the gale wind described in the poem. Mission accomplished. The piece is a tremendous challenge for its singers, but Exaudi performs with aplomb.

Every word is clear in the final work on the recording, Song, a setting of W.B. Yeats “Easter 1916,”  composed in 2016 to commemorate the 100th anniversary of the Easter Uprising against British rule in Ireland. Heterophonic deployments of an arcing melody, inflected with shakes, alternate with vertical pileups. Compound melody provides another layer of the piece’s architecture, but it is fleeting compared to the main sections, which soon are presented in different ensemble deployments. Melody in octaves, slightly staggered and rising in intensity, brings the piece to an emphatic close.

One can readily hear why Fox and Exaudi have had such an extensive collaboration. The compositions suit the performers and vice versa in excellent fashion. Trostlieder is one of our favorite recordings of 2022.