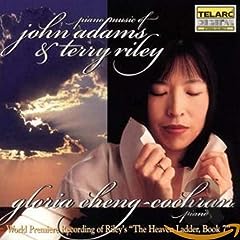 Gloria Cheng opened the season of serious music-listening in her position as opener of the Piano Spheres series of concerts.  The program was oriented the program to two-musicians works, and there was a gracious lead-in to the guest appearance to be given by Thomas Ades in December, with performances of two of his early works.

Cheng began the concert with Ades’s Opus 7, “Still Sorrowing” (1992-1993), written at age 21.  This is a more restrained work than many of his, with the prepared piano dampening the middle range of the piano, creating a hollowness to support its feeling of loss.  The middle work of the second half of the concert was Ades’s Opus 8, “Life Story” (1993) in its version for soprano and piano; Angela Blue was our excellent singer last night.  The work is a setting of the Tennessee Williams poem (1956) of two strangers having had their first one-night stand; I wondered how the poem escaped the attention of composers before Ades.  Ades gives the soprano (with one minor exception the words work fine for a woman singing about a man) a yawning, boozy, blues-y melody, up to the sting in the tail of the last line.  Amazon has a great CD, at bargain price, with Ades at the piano; the CD includes seven of his early works, and clips are available.

Completing the first half of the concert were two major works for piano duet.  Cheng was joined by Robert Winter — UCLA professor, Philharmonic lecturer, interactive CD developer — for Beethoven’s four-hand version of the “Grosse Fuge”.  The two made things easy by using two pianos, which avoided developing the choreography for whose arm would be where, but I didn’t find the performance especially persuasive.

She was then joined by Neal Stulberg — currently director of orchestral studies at UCLA and a former recipient of the Seaver/NEA Conductors Award — for a performance of “Variations on a Theme by Beethoven” by Camille Saint-Saens.  We seemed to be in a salon in Paris while this was being performed. To replace a premiere which was withdrawn because the work wasn’t ready, Cheng substituted a work written for her, two movements, rather.  Two years ago, she gave the premiere of “Seven Memorials” (2004) by Stephen Andrew Taylor, now at the University of Illinois.  This is an excellent work; the NY Times music critic called it “sparklingly tactile” in reviewing Cheng’s performance of four of the movements at Tanglewood in August.  Last night Cheng played the fifth and sixth movements; excerpts of the music are available here, from Cheng’s performance of 2004.

For the rousing conclusion, Cheng was joined on the second piano by Grant Gershon, now in his sixth year as Music Director of the Los Angeles Master Chorale.  The two gave us a work written for them, which they premiered at Getty Center, “Hallelujah Junction” (1998) by John Adams.  I am an unabashed fan of this work.  It belongs in your music collections.

A good concert!  (And the attendance was about the largest I’ve ever seen there.)

5 thoughts on “Last Night in L.A.: Gloria Cheng and friends”