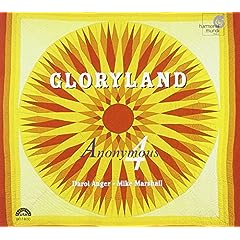 Appalachian songs of faith and hope sung with passion and amazing grace by the gifted ladies of Anonymous 4.  Unlike the New England Presbyterian and Methodist “high church” affirmations of American Angels, these are the songs of tent revivals and roadside tabernacles, soul music for people like me who grew up in deep hollows, surrounded by ancient worn mountains.  The virtuoso fiddle, mandolin and guitar accompaniment of Mike Marshall and Darol Anger add exactly the right note of “high lonesome” authenticity and give Gloryland the joyous sense of music lived, not just performed. 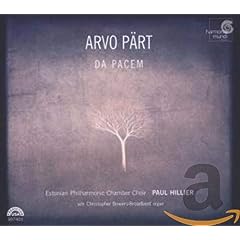 Stunningly powerful sacred music from another isolated corner of the globe by Arvo Pärt, arguably the most popular  contemporary composer alive.  These shorter pieces range from the recent–Da pacem Domine, a quiet and powerful prayer for peace composed in 2004–to the early and glorious Magnificat, written in 1989.  Of special note is the world premiere recording of Pärt’s Two Slavonic Psalms (1997), his first acappella work using the “tintinnabuli” style.  The Eastonian Chamber Choir, under Paul Hillier’s direction, is magnificent.

Despite a continuing battle with dystonia in one hand that sidelined him completely for seven years after 1991 and has since severely limited his performing career, Andrew Rangell has built a reputaton as one of the great living pianists.  His few public performances in recent years are legendary but he has maintained his reputation mainly through a series of extraordinary recordings like this one–his fifth for Bridge–and one of his absolute finest.  Here are five 20th century sonatas by four of the century’s leading composers–George Enescu, Igor Stravinsky, Leoš Janáček, and Ernesto Halffter, who accounts for two of the sonatas, dated nearly 60 years apart.  Rangell’s playing is so highly personal and unconventional, his interpretations so brilliant but quirky, that he is inevitably compared to Glenn Gould, although Rangell is stylistically more adventuresome. 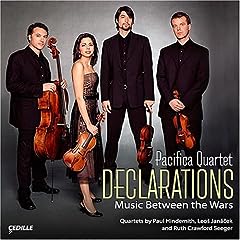 Three treasures of the post-war years played with enormous skill and passion by one of the best of the current crop of string quartet players.  Janácek’s String Quartet No. 2, “Intimate Letters,” written in 1928, the year of his death, is an astonishing final valentine to his longtime muse Kamila Stösslová, a woman half his age, with whom he had a fervent, but platonic, relationship. It is also one of the greatest of all string quartets and the Pacifica deliver a magnificent performance.  Paul Hindemith’s String Quartet No. 4 of 1922 is not played that much these days which is unfortunate because it, also, belongs in the pantheon of great string quartet music.  The unexpected delight here is Ruth Crawford Seeger’s String Quartet of 1931,  a spiky, dramatic gem that demonstrates that she was every bit as good as the boys and makes one wish she had been less of a dutiful wife. 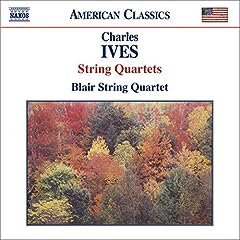 Ives wrote his First Quartet when he was a mere 22 and it provides an early example of his unorthodox creative style and his generous borrowing of revival and gospel hymns as musical sources. The much more complex Second String Quartet was written over a long period–between 1907-1913–and reflects his contempt for the polite drawing room chamber music of a genteel age. Ives himself summarised the work’s program as: ‘four men – who converse, discuss, argue … fight, shake hands, shut up – then walk up the mountainside to view the firmament’. No girly-man, Charlie. Vanderbilt University’s Blair String Quartet play up a storm. 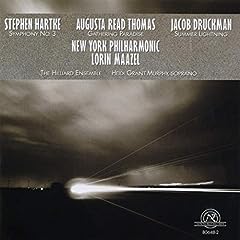 World-premiere recordings of orchestral works by three of the most acclaimed contemporary American composers.  I heard this performance of Stephen Hartke’s Symphony No. 3 (for countertenor, two tenor, and baritone soli with orchestra) on the original radio broadcast in September 2003 and was so haunted by it that I regularly checked over the next couple of years to see if it had been released on CD.  The recording holds up so well on second and third hearing that I’m almost reluctant to mention that it is a September 11 remembrance piece commissioned by Maazel because its transcends any particular moment in time.  The symphony features the voices of the Hilliard Ensemble with a setting of a poem by an 8th century Anglo-Saxon writer musing on the past splendor of an ancient Roman city now in ruins and is cast in one movement consisting of four, smaller sections.  It is a haunting and shattering work.