The Less I Say the More My Work Gets Done 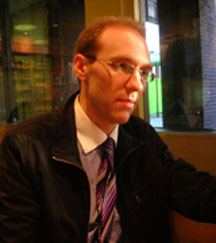 Here’s some great news for the Sequenza21 community.  The super-hot Philadelphia-based chamber ensemble Relâche is presenting a concert of new works, including the premiere of our own Galen H. Brown’s Waiting in the Tall Grass, at the Greenwich House Music School in downtown Manhattan on November 30, followed by a repeat performance the following night at the International House in Philadelphia. The concert will also include new pieces by Duncan Neilson, Brooke Joyce and, Paul Epstein.

…Brown’s music has been described as “bright, passionate music for a brighter, more passionate new day” by Kyle Gann, former critic for the Village Voice. With roots in both Minimalism and electronic rock, he writes rhythmically driven music where melodic riffs and fragments shift against each other, evolving an intricate counterpoint beneath a surface which is sometimes propulsive, sometimes placid.

Describing his new piece, Brown says “While this piece isn’t at all programmatic, the title Waiting in the Tall Grass is intended to evoke the sense of a sort of purposeful stasis, with perhaps a hint of foreboding. The ‘tall grass’ is, of course, where the predator lies in wait for its prey.”

Brown lives in New York City. He holds a Masters degree from New England Conservatory, where he studied with Lee Hyla; his other primary teachers were David Rakowski and Jon Appleton. A contributing editor at Sequenza21.com, he regularly reviews concerts and CDs, and writes on issues ranging from compositional techniques and history to aesthetic philosophy to the structure of the music industry. Sequenza21 won an ASCAP Deems Taylor award in 2005.

Founded in 1977, Relâche has been a significant force in new classical music for 30 years, from co-presenting the landmark New Music America festival in 1987 to annual performances of Phil Kine’s classic Unsilent Night. The new works on this concert are the latest in a rich history of commissions from composers such as John Cage, Philip Glass, Michael Nyman, and Pauline Oliveros.

Well done, Galen.  As we say down in Appalachia where I grew up:  “We’re right proud of you.”

There’s a sample of the piece here.  The rather strange picture was taken by me in the Sequenza21 office at Starbucks on 57th between Eighth and Ninth.