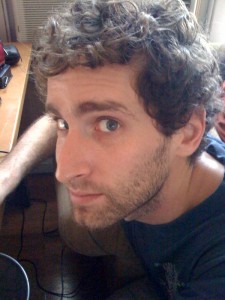 Monday last week I headed over to San Antonio to hear a house concert hosted by composer and San Antonio Symphony bassist Doug Balliett. The program included two new pieces by P. Kellach Waddle, “Louange a l’Eternite de Jesus” from Messiaen‘s Quartet for the End of Time, and selections from Balliett’s arrangements and reinventions of Schumann‘s Dichterliebe for ensemble and tape. Balliett also contributed three new songs and arrangements of two by Mendelssohn, sung by Ken-David Masur.

It was hot. The audience, which ranged from symphony players to kids and families, made do with hand-fans but, now that I think about it, maybe the heat got to our brains in a good way. Balliett’s inquiry into Dichterliebe — sometimes faithful to Schumann, sometimes wild, gorgeous — stood out as an encouraging example of how the politics of old/new fall by the wayside in enthusiastic and creative hands.

I’m always encouraged by informal events like this. It’s refreshing to remember that institutions don’t have a monopoly on the music I love.