If I had a hammer

…Or maybe 100? Then I’d be well on my way to doing what sound artist Douglas Henderson has planned at Peirogi Gallery’s BOILER space in Williamsburg, NY the start of next month (only not nearly so well as I think he’s conceived). But if I can’t be there, maybe YOU would like to pick up a tool and contribute? S21’s roving composer in the street, Chris Becker has both the news and an interview with Henderson:

On November 7th and 8th, at Peirogi Gallery’s BOILER space in Williamsburg, NY, I will be participating as a head carpenter in a performance of composer Douglas Henderson’s Music for 100 Carpenters.  Doug is looking for volunteers to perform this 30-minute piece.  If you are interested in performing, can hammer a nail, and are available on Saturday, Nov. 7 and/or Sunday Nov. 8 , 6:00pm – 9:00pm for the performance and orientation, please RSVP to:  100carpenters@googlemail.com 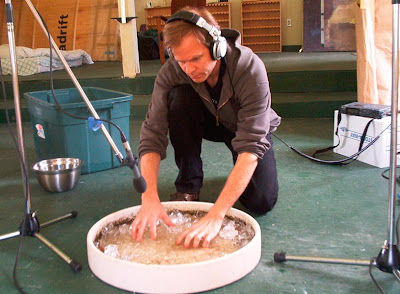 Doug’s work straddles a line between the categories of music, sculpture, and dance and theater.  He has presented works at the Whitney Museum at Altria, Dance Theater Workshop, and PS122 in New York and at Inventionen and daadgalerie in Berlin, among many others.  He describes Music for 100 Carpenters as “a theatrical surround-sound music performance, enlisting 100 skilled and unskilled trades people.  Prying at Stockhausen’s convolution of rhythm and timbre, 100 hammers, 100 blocks of wood and some 10,000 nails of varying sizes are brought to bear in a real-time, real-world articulation of complex computer synthesis.  Under the guidance of job supervisors, thousands of hammer blows become waves of tonal murmur, threaded with rustlings of nails and occasional snarls of righteous indignation.  The performers are organized into work crews with lists of tasks and closely timed schedules, and arranged in a circle around the audience.  Toolbelts, sweat and lunchboxes are part of the score.”

I interviewed Doug to discuss Music for 100 Carpenters, his other works, as well as his current life in Berlin, Germany.  The interview is posted on my blog at beckermusic.blogspot.com/2009/10/interview-with-douglas-henderson.html

A worthy gig for any of you, and honest labor to boot. If you’re near, bring your gear!