The Kids are All Rite 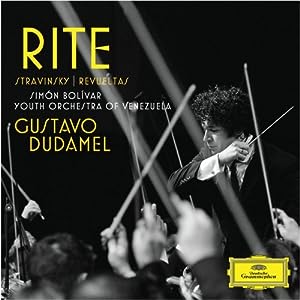 True, Stravinsky’s Sacre du Printemps is a watershed work. It serves as many a classical listener’s jumping off point when first exploring Twentieth Century repertoire. But can a work, no matter how seminal, have too many recordings? Can it get programmed so often on concerts that it loses its zing?

I have several recordings of the piece myself, but I’d begun to wonder in the past couple years whether the Rite was in danger of being overexposed. And I’m not the only one…

Enter young conductor Gustavo Dudamel and his even younger colleagues from the Simon Bolivar Youth Symphony Orchestra of Venezuela. Their version of the Rite is viscerally powerful, rhythmically muscular, and impressively wide in its dynamic range. After getting a bit burnt out by the piece and its attendant folklore, I’m refreshed by hearing Dudamel’s rendition.

In a clever programming touch, the Stravinsky is paired with Silvestre Revueltas’ La Noche de los Mayas. Originally a 1939 film score, a concert suite of the work was only fashioned some two decades after Revueltas’ death. Latin dance signatures and melodic inflections are offset by virtuosic percussion writing, including some cadenzas that help to make evident the musical kinship between Rite of Spring and La Noche de los Mayas.

The sociocultural resonances are obvious as well. It might seem gruesome to pair works based on their common interest in human sacrifice, but Rite restores the vitality and bite of early modernism’s interest in still-earlier primitivism.