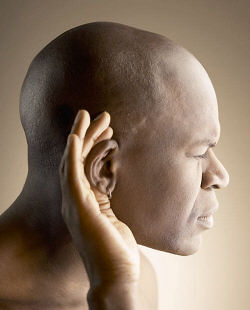 When I was a kid, my family did a lot of hiking and camping, and on those trips at mealtime or for a cup of tea during a rest my dad would do the cooking.  He would break out a little camp stove, fill a pot with water, and turn on the gas, igniting it with a match.  The gas would ignite with a whoosh, and then the sound would settle into a steady white-noise hiss.  The noise was loud enough to drown out little sounds like trees shifting in the breeze and the buzz of a nearby fly, but not loud enough to be a distraction, and after a few minutes it would fade into the background and I would forget about it.  After a while the cooking would be done and my dad would turn off the stove, which would quickly sputter into silence.  You’ve probably had the same experience–the motor in your refrigerator stops its faint purring, or the air conditioner’s automatic shutoff kicks in, and the sudden change takes you from not listening to a sound that was there to listening to its absence.

A few days ago I was doing some research in an archive of old periodicals, and I stumbled across a fascinating passage from a 1920 edition of the British Journal of Psychology.  The paper, written by E.M. Smith and F.C. Bartlett, is entitled “On Listening to Sounds of Weak Intensity,” and concerns an experiment in which subjects were asked to listen to sounds at very low volume.  The authors describe a phenomenon also discussed by earlier researchers which they call “Positive Silence.”  This is a silence which is “very clearly distinguished from that accompanying the mere absence of sound.”  In these experiments, positive silence was experienced by subjects when they could not hear a test sound and were confident that the reason was that no sound was playing, but not when they heard no sound but thought that it was possible that the sound was just beyond their perception.

Other researchers before Smith and Bartlett had apparently run experiments more closely related to the experience of the camp stove or refrigerator or air conditioner shutting off: “Titchener has attempted definite experiments on the positive character of silence by subjecting observers for thirty seconds or more to the noise of machinery in his laboratory workshop.  At the end of the set period, the noise was cut off as abruptly as possible.  Various organic and kinaesthetic sensations were reported, and silence was experience as ‘something else than sound or the cessation of sound.'”

And Smith and Barlett offer this quote, which appears in a book called Men in Battle by Andreas Latzko, from a solider who had returned home from the trenches of the first World War: “There is nothing but a glorious quiet that you can listen to as to a piece of music!  The first few nights I kept my ears cocked for the quiet, the way you try to catch a tune at a distance. . . it was so delightful to listen to no sound.”