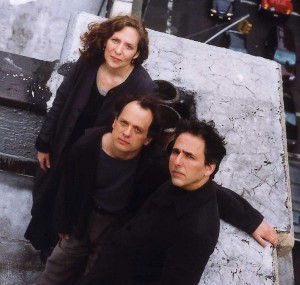 Its not often I leave a new music concert and my ears are ringing, but Friday night’s performance of the University of Michigan Contemporary Directions Ensemble (CDE) pumped up the volume with works by Jefferson Friedman, Stephen Hartke and Bang-On-A-Can founders Julia Wolfe and Michael Gordon.

The evening started off with Mr. Friedman’s 78 for pierrot ensemble, an upbeat mixed meter groove centering around a repetitive riff alternatively appearing in minor and major modes. As CDE conductor Christopher James Lees explained in his pre-concert remark, the program was designed to explore the “New York” sound, because the featured composers either live in New York now or grew up there. Maestro Lees noted the confluence of rock, jazz and contemporary music that surrounded these composers as they developed their mature sound. 78 clearly connected to these roots with its syncopated, pentatonic theme juxtaposed against the inside-the-piano techniques and extended tertian harmonies of a soft chorale. The work proved to be an excellent starting point for the concert because its successors carried these populist and eclectic tendencies to opposite extremes.

For example, Stephen Hartke’s violin duo Oh Them Rats Is Mean In My Kitchen amplified the allusion to jazz and other improvised music with a free-flowing structure and a textural dichotomy of solo-accompaniment or rhythmic/melodic unity. Oh Them Rats most elegant demonstrates the connection between these composers and the modernism of the 1970s and 60s with its balance between bluesy melodies and dissonant harmonies. The arc of the work, in fact, expressed a subtle emergence of the blues scale as a primary melodic source from beginning to end. Accordingly, the piece climaxed with a smeared blues-scale melody played by both violins but out of tune and asynchronously such that it sounded like shoddy overdubbing on an old Muddy Waters record.

Contrasting in direction were Michael Gordon’s Who By Water for 17 players and his wife Julia Wolfe’s Tell Me Everything for 16 players, the final to pieces on Friday’s program. Mr. Gordon and Ms. Wolfe are the inaugural participants in the University’s William Bolcom Extended Residency program, and will return as guest lecturers in January. To whet our appetites, Mr. Gordon availed himself to students in lessons and a master class this week, both of which were well received. Through these interactions, most of the audience Friday knew to expect the high rhythmic and textural energy that typifies the Bang-On-A-Can style, though I doubt anyone had the foresight to bring earplugs.

Mr. Gordon also explained the simplicity of Who By Water’s structure in Thursday’s master class. To use his description, the first two thirds of the piece repeat a slows harmonic progression with ringing bass notes entering at irregular intervals. Then, the snare drum starts playing constant sixteenths to the end while the rest of the group basically repeats the first two-thirds of the piece (I noticed the bass line moved in reverse) but twice as fast. As someone who has been to multiple heavy metal concerts, you can trust me when I say Who By Water was loud. In addition to the constant presence of brass and woodwinds, Mr. Gordon amplifies his string players, achieving a volume level not commonly reached in the realm of concert music.

Ms. Wolfe’s “multiply groovy” Tell Me Everything possessed a more variegated instrumental texture and played with the stark opposition of the tutti ensemble and solos/duets. You may think from my descriptors that Who By Water, Tell Me Everything and 78 had a lot in common because they draw on rock music more than Oh Them Rats Is Mean In My Kitchen; yet, this was not the case. Who By Water and Tell Me Everything were more like sound mass compositions, and propelled themselves with rhythmic textures and orchestration instead of the more traditional melodic/thematic evolution in Mr. Friedman’s chamber piece. For example, a climactic moment in Ms. Wolfe’s piece came when the predominating duple pulse in the bass drum began to alternate with three incisive quarter notes, exposing the organizational authority of 3-against-2 relationships in Tell Me Everything’s polyrhytmic landscape.

Check back here in January and February for updates on Mr. Gordon and Ms. Wolfe’s residency at the University of Michigan.