[Ed. note – Welcome our newest contributor out in the City of Angels, Paul Bailey. Paul is a composer, trombonist and teacher, leader of the Paul Bailey Ensemble, and a good friend to boot. Paul’s own work draws quite a bit on music and culture outside both the standard university and powdered-wig crowd, has a deep dislike of pretention, and has no problem calling them like he hears them.] 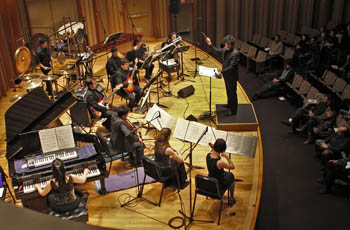 For the last week I have been at a loss for what to say about the music presented by the Argento Chamber Ensemble at their concert January 10th at the Zipper Hall “Monday Evening Concert Series.” It was obvious that the stage was filled with a plethora of world-class musicians who throughout the evening ably demonstrated that they all had achieved the very pinnacle of technique on their respective instruments. But with all that musical dexterity to go around I was mostly left cold by the music presented and was even more disappointed that for the last ten years many of new music concerts that I have  attended in Southern California (and more specifically at Zipper Hall) seem to equate complexity with aesthetic and artistic depth.

The concert opened with Brian Ferneyhough‘s La Chute d’lcare, which featured an Olympic medal–deserving performance by clarinetist Carol McGonnell, whose effort was minimized by the disjointed orchestration and impenetrable form. Although I didn’t find their performance lacking, after a while the virtuosity being displayed seemed to reflect a video game in which the ensemble plays each successive level of complexity to increase their score.

Ending the first half of the concert was Salvatore Sciarrino‘s Let Me Die Before I Wake, which again featured Miss McGonnell’s clarinet expertise (mostly through whispered tones). Although the piece was described by the composer as having “mysterious links with darkness: every bit of light is distilled,” the performance became more of duet with the intermittent dulcet buzzing drones of a slowly dying fluorescent light which I eventually preferred this impromptu duet instead of the more organized solo clarinet performance emanating from the stage.

The second half of the concert featured the much-heralded Fausto Romitelli‘s Professor Bad Trip. Other than some vague reference in the score to Henri Michaux’s experiences under mescaline and four pedantic announcements introducing each section (“Lesson 1,” “Lesson 2,” “Lesson 3,” and “Lesson 4”), it was left open what morals we might ascribe from this evening’s performance. The effect of having an announcer speak at the beginning of each lesson seemed to me about as aesthetically pointless as having an usher come out to tell us when the concert was over. (Not that musically there were any clues as to when each section was complete.) Like much of the evening musicians started and stopped without much discernible development of the musical elements. In many ways Professor Bad Trip was like a listening to wind-up box of 12 instruments chattering independently which somehow happened to stop together every 10-15 minutes.

[Some video of a 2008 performance by the Fiarì Ensemble:]

On a more positive note I can say that the ensemble (and the sound engineers) expertly handled mixing the acoustic and electronic instruments. From personal experience, it’s very hard to decide how to blend these disparate sound sources. Their decision to play through a PA and to degrade the guitar sound through pedals so it would blend better (which it did) worked pretty well. My only problem was at times hearing the guitar out of the center PA above the stage instead of from where the guitarist was sitting, but not a big deal overall. I also felt that Jay Cambell‘s loquacious electric cello jamming was diminished by his awkward switch back to his Ars Antigua violincello. After rocking out, it works better if you acknowledge the audience when switching instruments.

With that point I should wrap up and get to my main frustration with the whole evening—and many other new music evenings I have witnessed. “Witnessed” is really the point, because with very little interaction among the musicians, and only a brief introduction to begin, our part was basically to sit silently for over 2.5 hours and listen to some of the best technical musicians that the academy and conservatory system produce. A little of this music goes a long way, and I know that if I brought many of my friends to a show like this they would have no frame of reference on which to hang their ears. Maybe the problem still is, as Milton Babbitt said, “Who Cares If You Listen”… but in 2011, I’m still hoping that we can move beyond such ivory tower dogma.

Please don’t get me wrong: I’m not suggesting that art music necessarily has to entertain, but it does need to engage its audience. The music presented in this concert would be unintelligible to all but the most select and die-hard audience, and by now isn’t it obvious that such complexity only obscures the intended meaning, and that the implied depth is only superficial? As a performer I also know how exhilarating performing technically challenging music can be, but as an audience member it was about as engaging as watching a seven-year-old shred on Guitar Hero.