New Kid on the (Brooklyn) Block 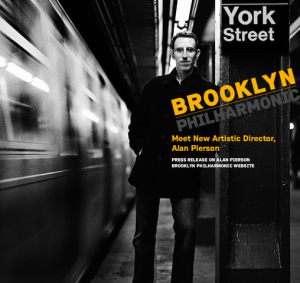 Congratulations to Alan Pierson. Effective immediately, the conductor, composer, and director of Alarm Will Sound will join the Brooklyn Philharmonic Orchestra as their new Artistic Director.

It’s no secret that the Brooklyn Phil has been facing significant challenges of late. During the recession, they’ve endured straightened finances and had to curtail their programming. Pierson is part of an effort to reboot it as a lithe unit, an “urban orchestra.”

The ongoing plan is that the Phil will reconnect with the community and widen its reach by having a presence in a number of different locales throughout the borough. This seems similar in some ways to the recent model of the New Jersey Symphony, which gives concerts throughout the Garden State and has made educational outreach and community engagement a significant part of its profile.

Let’s hope that this approach helps the Brooklyn Philharmonic to remain lively in its programming and solvent in its finances! Oh, and lest any new music devotees are concerned, fear not: Pierson will still remain in his current position with Alarm Will Sound.

Yesterday, Pierson released the following statement about his new appointment:

Dear friends, supporters, and fans of the Brooklyn Philharmonic,

It is a great honor to be given an opportunity to help build the future of the Brooklyn Philharmonic. This is an extraordinary time to be making music here, with Brooklyn’s ever-increasing cultural richness and diversity fostering a fantastically fertile artistic environment. In re-imagining the role of the Brooklyn Phil, we want the orchestra to connect with the Borough’s population through events that celebrate and reflect its diverse communities.

The Philharmonic’s 2011-12 re-launch will see us performing in communities throughout the Borough, rather than at one single venue. Each program will bring the Phil together with artists of the community in original and exciting collaborations. My hope is that this work will be stimulating not only to people living in these neighborhoods, but to the broader New York concert-going public and the larger musical community as well.

The Philharmonic has an exceptional history of groundbreaking music-making over more than 50 years, and I’m excited to help lead it into this next era. While plans for our new season are already underway, we’re always looking for new ideas — please feel free to contact us at info@brooklynphilharmonic.org if you have programming ideas you’d like to share. And keep watching this website for news and updates as plans progress for the Brooklyn Phil’s re-launch this fall.

One thought on “New Kid on the (Brooklyn) Block”