CDE and the Machine Which Makes Art 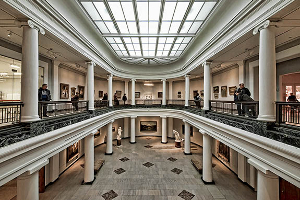 Monday night, the galleries of the Univeristy of Michigan Museum of Art (UMMA) were filled with the music of Stephen Harkte, John Harbison and Julia Wolfe thanks to the University of Michigan’s Contemporary Directions Ensemble (CDE) under the direction of its energetic and accomplished conductor Christopher James Lees. UMMA opened its doors to CDE in a collaborative exhibition of the evening’s music and a piece by Swiss artist Mai-Thu Pirret currently on display at the museum. The connection drawn between Mr. Hartke, Mr. Harbison, Ms. Wolfe and Ms. Perret’s output comes from the creators’ influences: extra-musical inspirations for the composers and, for Ms. Perret, the following quote from artist Sol Lewitt, “The Idea is the Machine Which Makes Art.”

Before diving into the music, I’d like to spend a moment praising the concert’s setting on UMMA’s ground floor. Opposite the building’s main entrance, performers are recessed in a cathedral-esque nave where the sound reverberates wildly, resonating against the stone pillars, marble floors and masterworks of art lining the walls. Recently, the museum has made a habit of hosting performance groups associated with the University of Michigan, including last month’s triumphant standing-room-only performance of all six Brandenburg Concertos by a student early music ensemble under charismatic conductor/harpsichordist Brandon Straub. With unforgettable events like January’s Bach-extravaganza, and Monday’s intimate offering of contemporary music, the UMMA is one of the most exciting concert venues at Michigan.

Of course, a space is only as memorable as the music we experience within it, and Monday’s program was potent and profound, with each work demonstrating a different approach to the evening’s over-arching theme: outside influences. The first piece, Stephen Hartke’s The Horse with the Lavender Eye (1997), focuses on the idea of the non sequitur, and draws on sources from, “Carlo Goldoni to Japanese court music to the cartoonist R. Crumb, as well as 19th century Brazilian novelist Machado de Assis and Looney Tunes,” for its inspiration, according to the composer’s note.

A trio of clarinet, violin and piano, The Horse with the Lavender Eye unfolds in four seemingly isolated movements each of which has a strong individual identity. The second movement, “The Servant of Two Masters” is the best example of the movements’ idiosyncrasies as the piano alternatively serves the Clarinet and Violin of the course of its duration. The last two movements, “Waltzing in the Abyss” and “Cancel My Rhumba Lesson” make the clearest stylistic allusions of the work with hints at a waltz pulse and rhythmic and melodic tropes from early jazz and/or ragtime, respectively. As much as the movements feel disconnected – often,they just unravel, ending without a sense of closure, not least a strong connection to what follows – the whole work is held together by Mr. Hartke’s personal sense of rhythm, along with a very subtle reference between the first and last movements. A strong presence of rhythm, its transformative role in the music and – in particular – a rhythmic profile hovering on the boundaries of transparent grooves have always been prominent in my understanding of Mr. Hartke’s music and these elements were re-illuminated to me in the CDE’s performance of this composition.

Closing the first half of Monday’s concert was John Harbison’s work for mixed ensemble and soprano, Mirabai Songs (1982). The piece employs more traditional extra-musical sources – the poetry of 16th century Indian mystic Mirabai – but Mr. Harbison’s ensemble and the colors he achieves with it are nothing less than extraordinary . Scored for soprano and a supporting cast alto flute, bass clarinet, violin, viola, cello, bass, percussion and harp, Mirabai Songs leaves a unique orchestrational imprint that allows the music – as Maestro Lees explained to me after the concert – to allude to the eastern heritage of the text without seeming trite, without distorting Mr. Harbison’s distinct perspective as an American composer.

Beyond instrumental colors, Mirabai Songs is a clinic in text setting, both in how to portray written words in the vocal part and how to set the stage for a text in the accompaniment. For example, the second movement, “All I was Doing Was Breathing” uses a hazy ensemble to texture transport the listener to the surreal geography of the poetry well before the soprano enters singing, “something has reached out and taken in the beams of me eyes.” Along the same lines, Mr. Harbison creates dramatic contrasts in mood that masterfully elucidate critical moments in the poetry or changes in narration. Of course, these compliments also speak to the excellence of the performance, not only from the CDE but from soprano soloist Lindsey Kesselman, as well. Her delivery of the vocal part was captivating and austere and embodied the self-controlled fanaticism that drove Mirabai to create this text centuries ago.

The final work on the program – the only piece on the second half of the concert – was Julia Wolfe string orchestra work, Cruel Sister (2007). As some of you may remember, the CDE played works by Ms. Wolfe and her husband Michael Gordon last December. These pieces, Tell Me Everything and Who By Water, respectively, were power-packed, amplified onslaughts of sheer sonic force. In contrast, Cruel Sister is acoustic and has a wider range of textures, dynamics and colors and a more nuanced structure, thanks – in part – to its programmatic relationship to an old English ballad of the same name. As Ms. Wolfe explained to the audience prior to Cruel Sisters’ performance, the work is based on a myth about two sisters who compete for the affections of the same man. Ultimately, she who is not favored drowns her sister, whose bones are then used to make a harp.

Although this narrative backdrop is reflecting clearly in the music, the piece does not rely on its program for success. Cruel Sister contains all the hallmarks of Ms. Wolfe’s style but also possessed a large-scale lyricism I had experienced only once or twice in my limited exploration of her music. She sets up a beautiful and heartbreaking contrast between the extremely dissonant and rhythmically chaotic climax of the first section with absolutely stasis in the following portion of music. This duality is only reconciled in the coda where biting unison pizzicatos strike against the yearning sighs of a high violin solo and ultimately win out, ending the work with a chilling echo through the halls of the museum. As the vibrations of that final pizzicato evaporated into silence and Christopher Lees dropped his baton, I became certain that, in a season of strong performances, this CDE concert is the group’s crowning achievement – so far.