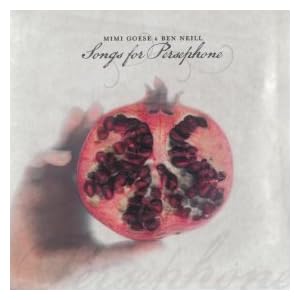 Take a seductive voiced art-pop singer and a post-jazz/alt-classical trumpeter. Add fragments of nineteenth century classical melodies, electronics elicited by a “mutantrumpet” controller. Then add influences ranging from ancient Greek mythology to the Hudson River Valley. What you have are the intricate yet intimate sounds on an evocatively beautiful new CD: Songs for Persephone.

The Persephone legend is one of the oldest in Greek mythology, with many variants that provide twists and turns to the narrative and subtext of the story.  In the myth, Persephone, daughter of Zeus and the harvest goddess Demeter, is kidnapped by Hades, god of the underworld. During her absence, vegetation is unable to grow in the world; fields fall fallow and crops cannot be harvested.

To break this horrible time of famine, the gods come to an understanding with Hades. Persephone is eventually freed, but on the condition that, if she has eaten anything while in Hades’ realm, she must return to his kingdom for a certain length of time. Thus, each year she must remain in the underworld one month for each pomegranate seed that she has consumed. This serves to rationalize, in mythic terms, the change of seasons, times of decay and renewal, shifts in light and weather; even the autumn foliage and the falling of the leaves.

Vocalist Mimi Goese and trumpeter Ben Neill have updated the Persephone story, while retaining its iconic essence, on their new recording Songs for Persephone (out now on Ramseur Records). As one can see from the pomegranate on the cover, (a visual designed by Goese), the duo is mindful of the legendary Persephone’s history; but they are not hung up on providing a linear narrative. In a recent phone conversation, Goese, who wrote the album’s lyrics, said, “The artwork that I did for the cover, featuring the pomegranate, is one acknowledgement of the myth of Persephone. And there are other images that I found in the lyrics. But we were interested in using what was evocative about Persephone to create our own story. That’s sort of how the myth evolved too – one storyteller picks up the thread from another down through the years.”

They started work on this music some five years ago, but originally presented it as part of a theatrical production by the multimedia company Ridge Theater, starring Julia Stiles. In 2010, it was produced at Brooklyn Academy of Music as part of the Next Wave Festival.

The theatrical presentation and the mythological story behind it are only two strands in a disparate web of influences that resonate with Songs for Persephone. Both Goese and Neill make their home in the Hudson River Valley. Both for its stunning natural surroundings and its history as a home for artists of all sorts, the valley is rich with reference points. Neill feels that these are subtly imparted to the music.

In a recent phone conversation, he said, “I found myself particularly interested in the Hudson River School of painters. These Nineteenth Century artists depicted the local landscape and the changing of season with a dimensionality and symbolism that seemed to have an affinity with what Mimi and I were after in Songs for Persephone.”

For Neill and Goese, these extra-musical influences – artwork, nature, and theater – are an important part of the music’s genesis. But the polystylistic nature of their music making adds still another layer to the proceedings.

Goese says, “I started in dance and theater and later moved to performance art. Singing came along later. But I don’t have the musical background or training that Ben has – I’m self taught.”

Goese is a powerful singer, but Songs of Persephone brings out the lyricism her voice also possesses. Cooing high notes and supple overdubbed harmonies are juxtaposed with the more muscular turns of phrase. Experience plays a role in Goese’s tremendous performances on the disc. But she also credits the musical creations of her collaborator Neill with spurring on her inspiration.

“Ben has been a terrific person with whom to work,” Goese says. “He’s inventive and willing to try new things. From the moment we first performed together, at a concert nearly a decade ago, I’ve felt an artistic kinship with him.”

One can readily hear why Neill’s music would be an engaging foil for Goese. His background as a producer, and his years of work designing the mutantrumpet, have encouraged Neill’s ear toward imaginative soundscapes. His 2009 album Night Science (Thirsty Ear) is an example of Neill’s nu-jazz arrangements and soloing at their very best.

On the current CD, Neill’s playing remains impressive; but his arranging and collaborative skills come to the fore. There are intricate textures to found, on which Neill’s trumpet and electronics are abetted by strings, bass, and drums, but it’s the melodies, floating memorably past, one after the other, that are most impressive here. Some of the melodic lines he crafts are imitative of the voice in their own right: it’s no accident that some of the most inspired music-making on Songs for Persephone are when Goese and Neill create duets out of intricately intertwined single lines.

Neill says, “The classical materials that I used as the basis of the compositions on Songs for Persephone were melodies from the Nineteenth century: from opera and symphonic music. Many of them were from relatively the same era in which the Hudson Valley painters worked. I found it fascinating to juxtapose these two genres that were in operation more or less at the same time.”

He continues, “I’d describe the material as fragments of melodies: small excerpts rather than recognizable themes. None of them are treated in such a way that most listeners will be able to say, ‘Hey that’s Berlioz,’ or ‘That sounds like Schumann.’ They were meant to be a starting point from which I would develop the music: it’s not a pastiche.”

At 7:30 PM on September 27th, Goese and Neill will be having an album release party at the Cooper Square Hotel, part of Joe’s Pub’s Summer Salon series.  Goese says, “It’s an interesting space – we’ll have glass windows behind us, which is unusual as compared with a more conventional stage. But it’s fun performing in non-standard venues. It allows you to try different things and to bring different elements into the mix in terms of theatricality, lighting, and the way that you play off of each other. I’m excited to see how Persephone changes as we take it into various performing spaces.”

-Composer Christian Carey is Senior Editor at Sequenza 21 and a regular contributor to Signal to Noise and Musical America. He teaches music in the Department of Fine Arts at Rider University (Lawrenceville, New Jersey).