Ayelet Rose Gottlieb Discusses Her Music and Her Dream World 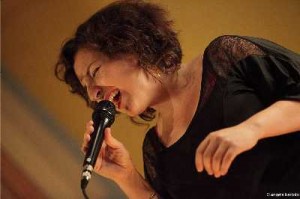 ETHEL will soon be reunited with our dear friend and collaborator Ayelet Rose Gottlieb at the 2012 Winter Jazz Fest (January 7th @ Zinc Bar). Ayelet has composed a deeply heartfelt piece for ETHEL and percussionist Satoshi Takeishi entitled Shiv’a . We’ve been developing Shiv’a for over a year now, and recently recorded it. This January’s concert marks the beginning of a series of live performances of the piece.

Ayelet’s style combines tuneful folk influences with moments of abstract improvisation. Her tone color choices are unusual and interesting. In this interview she discusses her music, her projects, and the fascinating relationship between her music and her dreams.

Dufallo: Can you discuss Shiv’a — your inspiration for the piece, and how it came together?

Rose Gottlieb: Shiv’a is a meditation on the process of mourning. It referneces Jewish and Buddhist mourning rituals. I composed it following several deaths, including that of my good friend, drummer and percussionist Take Toriyama. It took a while to piece together the seven movements of Shiv’a, and to find the right “language” for it (the movements vary from graphic scores to traditional scores, with improvisation sections). It’s a very special piece for me, as it’s my first long instrumental composition.

Being a vocalist, I’m used to working with text, and in this case the composition process was very different from anything I had done before. Since there were no words, the way in for me was visual. Each movement in the piece is like a sketch that draws an image with sounds and textures. The titles of the seven movements reflect upon a quotation from the book of Kings:

The movement titles also reflect the four elements of nature, being slightly jolted and out of place — Geshem (rain), Ra’ash (earthquake), and Esh (fire). Air is referenced through the use of a unique instrument that was made specifically for Shiv’a by installation artist Michelle Jaffe: the “Blanket with 49 Bells (BW49B).” My dream life is at least as “real” to me as my waking reality… When I started composing Shiv’a I had an incredible,  powerful dream of a blanket with bells on it, that was moved by the wind. Michelle took on the task of bringing this sound-sculpture into physical reality, and the BW49B is now an integral part of Shiv’a. The bells signify a soul that keeps ringing in the world after the body has passed…

Dufallo: Can you tell a little bit about your musical history?

Rose Gottlieb: From childhood through the end of high school I studied to be a classical flautist. When I was about 14 I started “flirting” with improvisation — first as a flautist, then as a vocalist. Saxophonist Arnie Lawrence moved to Israel in the 1990’s, and performing with him solidified my direction into the realm of vocal jazz and improvised music… About a year before I started singing I started having a recurring dream of swirling colors — a large, intricate orchestral piece would be playing, causing the colors to move. Every time I awoke from that dream I experienced a great frustration about not having the skill to “transcribe” this sub-concious composition… I decided to start writing music, in order to be able one day to write that piece that was asking to be born… Of course, once I started composing, the dream stopped. I’m still hopeful this piece will come to visit me again some day…

Dufallo: What are some exciting upcoming projects?

Rose Gottlieb: With Shiv’a — I’m very much hoping it will now have life as a performed piece. I feel that the combination of ETHEL, Satoshi Takeishi, and Michelle’s BW49B will be a real treat to see on stage. We’re starting this journey on the night between the 7th and 8th of January at Winter Jazz Fest (Zinc Bar, 12:15 AM). The album is in the mixing stages, and will be released toward the end of 2012/early 2013.

Aside from Shiv’a I have a few exciting projects in the works. On March 28th my composition for trombone and piano, Carry On — Check In, will be premiered at Carnegie Hall by pianist Vered Reznik and trombonist Haim Avitzur.

In Israel I recently recorded Betzidei Drachim / On the Roadside — a project that features my settings of Israeli and Palestinian poetry. The music is a cross-over of jazz, prog-rock, and middle-eastern music… This project features my long standing collaborator, pianist Anat Fort, as well as Ihad Nimer on oud and violin, and several other leading Israeli musicians.

With Mycale — John Zorn’s a capella vocal quartet — we’re touring the US and Europe, and working on new materials. We’re also gearing up for an exciting 2013 — Zorn’s 60th birthday year!

Outside my musical life — I recently shifted my base (once again) to London, where my husband works as an animator. I am grateful every day that music is my life and I have such incredible people to share it with…