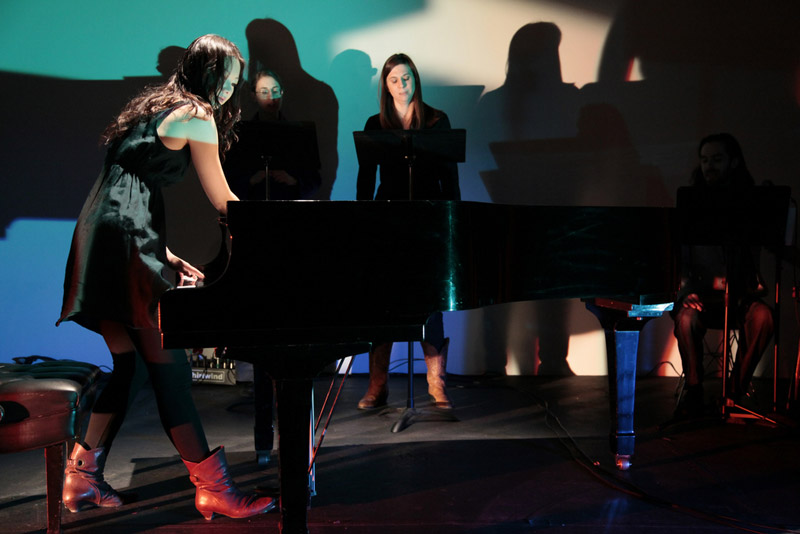 Vicky Chow performing with Ekmeles at the Avant Festival about a year ago; 2/12/11 (Photo courtesy of Avant Media)

The Wild Project (a tiny venue that is kind of like The Stone with bleachers) is where the Avant Music Festival is going on from now (it started on Fri, Feb 10) until Saturday the 18th. This is the third annual festival, and on this particular night, I witnessed a program that I never dreamed I would have been able to sit through when I was younger and still shunning the works of modern composers like David Del Tredici. An entire program of John Cage in person seems like a lot to swallow, but it seemed to have something for everyone.

I have to say right off the bat that I regrettably missed Vicky Chow’s prepared piano performance of Cage’s Sonatas and Interludes, and being that it was the first half of a 2-part show featuring Cage, it makes for a somewhat naked review without telling of that experience. Chow has mentioned that the Cage prepared piano Sonatas and Interludes are like the 20th century testament for 21st century composers the same way Bach’s Well-Tempered Clavier and Beethoven’s complete Piano Sonatas seemed to serve as the old and new testaments for pianists over the years. Being that prepared piano was a new benchmark for both the piano and music in general, it was and remains an exciting and innovative work of the Cage repertoire.

After composer and curator of the festival Randy Gibson kicked things off by setting up the chance lighting cues for the Concert for Piano and Orchestra (by choosing random participants and letting them toss a coin), the 2nd half of the Cage celebration concert commenced. Loadbang‘s performance of Living Room Music sounded at times like a minimalist take on “Stomp”, but it served as a really good opener.

Concert for Piano and Orchestra sounds by no means like a piano concerto, it’s much closer to a chamber piece on LSD. This performance of the piece featured vocals (not featured in every version) provided by Jeff Gavett and Gelsey Bell, and some random barks by trumpeter Andrew Kozar. For me, this was the highlight of the show. The piano by Vicky Chow was almost buried by the shrillness of the winds, horns and vocals, but its character in this piece (played on the inside) put it on par with the rest of the voices. Every time I hear this kind of music in public, I hear laughter, and even though I know that they are not laughing in ridicule at the music, there is an aspect of innocence in most audiences that kind of says that we all have this reaction to it, as if to say a majority of us get it on the same level, and some of it shocks us a bit. I think a good portion of the laughs were aimed at some of the commentary in the vocal parts as well.
The juxtaposition of Nocturne after Ryoanji really shows how far away Cage had gotten from melody and conventional ideas–Played nicely by Vicky Chow and violinist Drew Blumberg, Nocturne almost sounded like a classical work among the later Cage pieces. Ryoanji, performed here with percussion (Gibson was repeatedly striking a wooden rod and a gong laid flat on the stage carpet), trombone and vocals, was of the more jarring variety.

Ryoanji (This version features only the trombone and percussion)

The show concluded with Four3, a piece performed accompanying a film titled Beach Birds for Camera by Elliot Caplan. Not an easy work to grasp, with its pacing working against a film of dancers (Merce Cunningham Dance Group; This is one of many film collaborations between Cage, Caplan and Cunningham), the film had a tendency to work against the performance of the music, but the music is another story. 4 performers each playing 3 separate rainsticks, sine waves, and each one at a time (or two) occasionally gets up off the stage floor and walks over to the piano and plays the most sedate notes on the keyboard. I got very similar vibes between this and Ryoanji in that there was an intense stillness that put me in this state of semi-consciousness.

If you are interested in checking out the rest of the Avant Music Festival, there’s 3 more shows:

Click here for schedules, and to purchase tickets for the Avant Music Festival