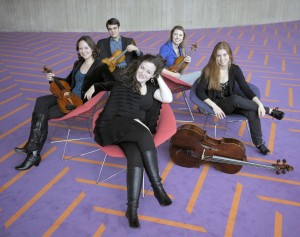 The Latin American Music Center at Indiana University is presenting American Cosmology, a program designed specially for the Composers Now  festival that is involving many members of New York’s new music scene in February.  Invited by Composers Now’s artistic director, composer Tania León, the program will be presented on February 4th a the Music Now Marathon in Symphony Space , and on February 6 at the Americas Society Concert Series.

American Cosmology was designed by the LAMC’s director Carmen-Helena Téllez to showcase complementary meditations on the sky and the cosmos represented in David Dzubay’s Astral  String Quartet and in Gabriela Ortiz’s Baalkah for String Quartet and Soprano. Astral, written for the Orion Quartet, was inspired by the ensemble’s name and by the constellations visible in the sky while the composer worked at the MacDowell Artsit Colony in  New Hampshire. Baalkah was composed for the Kronos Quartet and Dawn Upshaw, and sets texts from Mayan cosmology addressing patterns of existence and the place of humanity in the universe.

David Dzubay has received commissions from Meet the Composer, Chamber Music America, the National Endowment for the Arts, the US-Mexico Fund for Culture, and the Fromm and Barlow foundations, among others. Recent honors include Guggenheim, MacDowell, Yaddo, Copland House and Djerassi fellowships, a 2011 Arts and Letters Award from the American Academy of Arts and Letters, and the 2010 Heckscher Prize. His music has been performed by orchestras, ensembles and soloists in the U.S., Europe, Canada, Mexico, and Asia, and is published by Pro Nova Music and recorded on the Sony, Bridge, Centaur, Innova, Naxos, Crystal, Klavier, Gia, and First Edition labels.

David Dzubay writes: “Beginning work on a piece for the Orion String Quartet, and taking a cue either from the group’s name or perhaps from gazing upwards on evening strolls around the MacDowell Colony in rural New Hampshire, I decided to focus on the stars, composing an “Astral” quartet, movements of which would look at stars and space in various ways. Though the movements are somewhat independent, they do share musical elements and together are balanced on the curious middle movement. Like our galaxy, the quartet has a spiral structure, both in the shape of an eight-pitch ‘spiral motive’ and in the duration of the movements (roughly 5′-3′-2′-4′-3′). A recurring element, first heard in the opening bars, is a group of three evenly spaced attacks, a representation of Orion’s Belt, the tight grouping of three stars lined up in the Orion constellation.

Baalkah, which means ‘world’ or ‘cosmos’ in Maya, was inspired by the cosmological beliefs of the Maya of the Yucatan Peninsula and of other Mexican and Central American native peoples. For over 5,000 thousand years, these Native American peoples have conceived the world as being divided into 4 cardinal directions: east, north, west and south. In each one of these directions stands a gigantic tree that supports the sky, and each one has its particular cosmological characteristics, such as its own ruling deity, its own color, a set of related plants and animals, and, more generally, its own mood or personality. The lyrics of the first four songs of Balkah are taken from a 17th century Maya book, the Chilam Balam of Chumayel, a priceless depository of centuries of historical and religious wisdom inherited by Maya priests and kept hidden from the prosecution of the Catholic church. Each member of the string quartet represents one the four cardinal directions, and the center is represented by the soprano.

The ensemble includes Madalyn and Cicely Parnas, both soloists and members of the Parnas duo that has received accolades of  “stunning” and “electrifying” in the New York Times. Madalyn will play a solo piece by Timothy Dunne earlier in the evening on of Saturday February 4th.  Cicely was the inaugural artist-in-residence of the radio program Performance Today last December.  Violinist Tim Kantor has been a featured artist with the Banff and Aspen festivals as well as with the Cleveland Pops; and violist Rose Wollman has performed all over the word with conductors such as Pierre Boulez, Fabio Luisi, Hugh Wolf, Joseph Silverstein, and Larry Ratcliff in orchestras all over the world. A fierce new music performer, soprano Sharon Harms will return later to New York for the performance of Charles Wuorinen’s It Happens Like This, which she premiered under the baton of the composer at Tanglewood last summer.